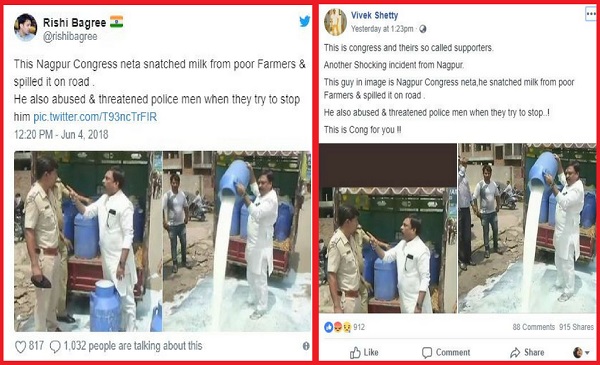 An image of a man spilling milk on the streets of Nagpur has gone viral on Twitter. A Twitter handle Rishi Bagree with a large following of right-wing sympathisers claimed that the man in the image who snatched milk from the poor farmers and "spilled it on the road" is a Congress leader from Nagpur.

This Nagpur Congress neta snatched milk from poor Farmers & spilled it on road . He also abused & threatened police men when they try to stop him pic.twitter.com/T93ncTrFIR

This Nagpur Congress neta snatched milk from poor Farmers & spilled it on road . He also abused & threatened police men when they try to stop him pic.twitter.com/NN4bBB1GDD � Rajshri Mahtani (@rajshri_mahtani) June 4, 2018

Another Shocking incident from Nagpur.

This guy in image is Nagpur Congress neta, he snatched milk from poor Farmers & spilled it on road . He also abused & threatened policemen when they try to stop This is @incindia for U viaWA pic.twitter.com/FmJ4Ov66hJ � #GauravPradhan ?? (@DrGPradhan) June 4, 2018

This image has also gone viral on Facebook with co-founder of fake news website Postcard Vivek Shetty using the same narrative. His post on Facebook has been shared�906 times and has received 84 comments. But who is this guy in white kurta who is seen forcibly spilling milk on the road and pointing a finger at the policeman.

Nagpur: Protesters spilled milk on road against Union Agriculture Minister Radha Mohan Singh's remark on the ongoing farmers' strike; distributed milk to locals who came up with utensils requesting for it #Maharashtra pic.twitter.com/ke71cKYJpm

We found that the man who is now infamous on social media is Prashant Prabhakar Pawar. We also found a link from the website�myneta.info�giving a description of Prashant Pawar as a candidate from Raj Thackeray-led Maharashtra Navnirman Sena (MNS) for the state assembly elections, 2014. BOOM spoke to Prashant Pawar after finding his number on the website myneta.info. Pawar said, " I have no links with any of the political parties. I was linked to the NSUI in 1984 but nothing after that. I have worked with the MNS in the past but I am not linked to any party anymore." Talking about the incident, he said, " I was representing the Jai Jawan Jai Kisan Sangathan and not any party." A news article in the Times of India published today also describes him from Jai Jawan Jai Kisan. BOOM also found a link to ABPMajha which mentions the organisation did spill milk during the recent protests in Nagpur.

Farmers in Madhya Pradesh, Gujarat, Maharashtra, Rajasthan, Punjab, Uttar Pradesh, Haryana on June 1st began a nationwide strike seeking resolution of several demands that included waiver of loans, right price for their crops and implementation of recommendations of the Swaminathan Commission. The government of India formed the National Commission on Farmers (NCF), with MS Swaminathan as its chairman in the year 2004. The Swaminathan Commission was tasked with finding solutions for the problems faced by the farmers. The commission has submitted five reports till 2006 and the fifth report is considered the most crucial as it contains suggestions for the agriculture sector as a whole. Protesters in Nagpur poured milk on the road against Union Agriculture Minister Radha Mohan Singh's remark and distributed milk to locals who came up with the utensils requesting for it, reported ANI. The Minister had called the 10-day farmer's strike a mere "media gimmick" for which a case was registered against him. The farmers and political parties supporting their protests had also come under severe criticism for throwing away milk and vegetables as a sign of protest. Reacting to these adverse comments, NCP leader Sharad Pawar had appealed to the farmers to intensify their agitation against the government but to avoid wasting milk and vegetables. Pawar appealed to the agitating farmers to share their production with poor people rather than wasting it.
BJP Congress fake news Farmer's Strike farmers featured milk Nagpur Protests Radha Mohan Singh Union Agriculture Minister
📧 Subscribe to our newsletter here. 📣You can also follow us on Twitter, Facebook, Instagram, Youtube, Linkedin and Google News