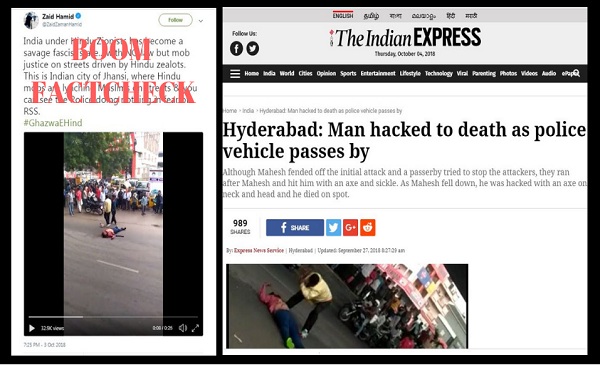 Zaid Hamid, a national security expert from Pakistan, tweeted a shocking video of a man being hacked to death by two people wielding an axe in the middle of a busy street in Hyderabad, Telangana and falsely claimed that it showed Hindu men lynching Muslims in Jhansi, Uttar Pradesh.

The video tweeted by Syed Zaid Zaman Hamid, better known as Zaid Hamid, on October 3, 2018 has been viewed over 36,000 times. It garnered over 1800 retweets and close to 250 comments at the time of writing this story. Many of the replies on the tweet pointed out that the narrative ascribed to it was fake yet Hamid is yet to delete the tweet. Following his tweet it is now being shared on Facebook with exact the same text.

"India under Hindu Zionists has become a savage fascist state with no law but mob justice on streets driven by Hindu zealots," Hamid wrote. "This is Indian city of Jhansi, where Hindu mobs are lynching Muslims on streets and you can see the police doing nothing in fear of RSS," he further added.

(WARNING: The below video contains graphic violence. Discretion is advised)

India under Hindu Zionists has become a savage fascist state....with NO law but mob justice on streets driven by Hindu zealots.

This is Indian city of Jhansi, where Hindu mobs are lynching Muslims on streets & you can see the Police doing nothing in fear of RSS. #GhazwaEHind pic.twitter.com/lPF4jzQAqE

Zaid Hamid, who has 1,80,000 followers on Twitter, describes himself as a Soviet-Afghan war veteran in his social media bio.

BOOM factchecked the video and found that it is from Hyderabad and that both the victim and attackers are Hindu. The murder was widely reported by Indian media. (Read about it here here here, and here ) Hyderabad police even came under fire after the crime as eyewitnesses said a traffic policeman who was at the scene failed to stop the attack and a police vehicle passed by as well.

The killing in broad daylight happened on September 26, 2018 on a busy stretch of the Attapur main road in Hyderabad when the victim Ramesh Jerigalla was returning after attending a court hearing about a murder charge against him.

The two accused have been identified as Kishan Goud and Lakshman Goud.

Cyberabad police under who are investigating the case said it was a case of revenge killing and that the attackers and victims were Hindus from the Gowda community.

DCP N Prakash Reddy confirmed that the incident had no religious angle attached to it. Reddy told BOOM that in December 2017, the victim Ramesh had been accused of murdering one of the accused's son.

Ramesh had been arrested but was out on bail and was attending the trial. “On the day of the incident Ramesh was present in court for a hearing about the murder charge against him and after the hearing, he was followed by Kishan and Lakshman who is the uncle of the victim who was allegedly murdered by Ramesh. In a fit of rage, they hacked Ramesh to death as revenge for killing their kin,”Reddy said.

"In fact, the father Kishan is suffering from a mental illness and was undergoing treatment for the past few years,” he said.

Claim Review :   This Is The Indian City Of Jhansi Where A Hindu Mob Is Lynching A Muslim On The Street
Claimed By :  Pakistani Defence Analyst Syed Zaid Zaman Hamid
Fact Check :  FALSE
Fake fake news Hindu Hyderabad Muslim Pakistan Twitter
If you value our work, we have an ask: Our journalists work with TruthSeekers like you to publish fact-checks, explainers, ground reports and media literacy content. Much of this work involves using investigative methods and forensic tools. Our work is resource-intensive, and we rely on our readers to fund our work. Support us so we can continue our work of decluttering the information landscape. BECOME A MEMBER
📧 Subscribe to our newsletter here. 📣You can also follow us on Twitter, Facebook, Instagram, Youtube, Linkedin and Google News 📝Stay updated with all our latest fact check stories.