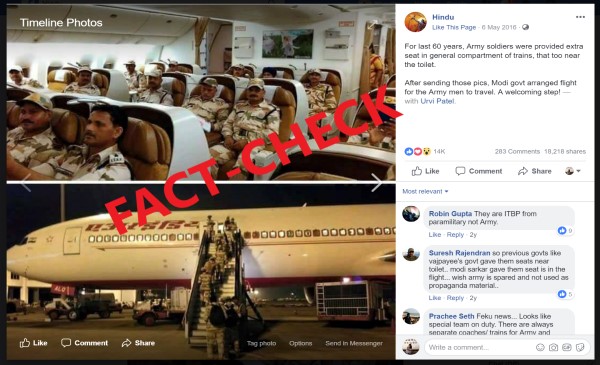 A photo with a caption suggesting that Prime Minister Narendra Modi has initiated free air travel for soldiers of the Indian Army, is false.

BOOM found the soldiers in the photos are are paramilitary forces who were deployed to Kerala in 2016 as part of election duty. 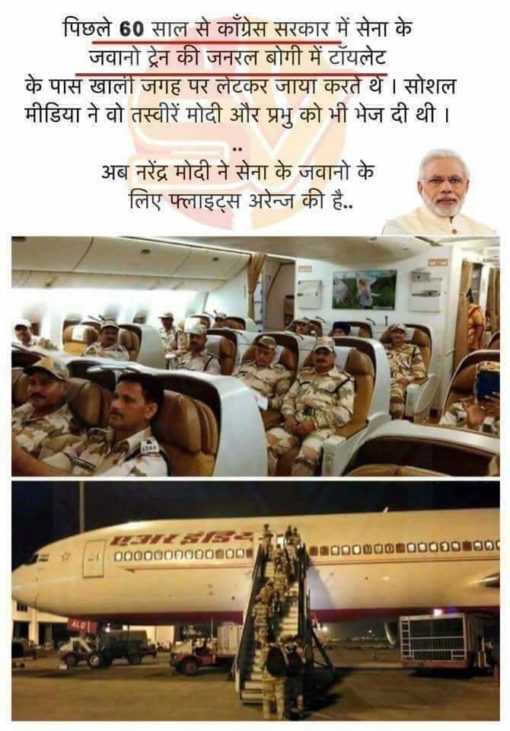 The above photo is viral with a caption that translates to, "For the past 60 years, army soldiers traveled on a spare seat in the general compartment of trains that too near the toilet. After sending those pictures, the (Narendra) Modi government arranged flight for the army men to travel. A welcome step!"

BOOM was able to ascertain that the uniformed men in the photo are not from any unit of the Indian Army but are from the Indo Tibetian Border Police (ITBP) Force. Unlike the Indian Army, the ITBP personnel are Central Armed Police Force which in turn fall under the broad umbrella of paramilitary forces. This means the ITBP is managed and headed by the Ministry of Home Affairs and not the Ministry of Defense. 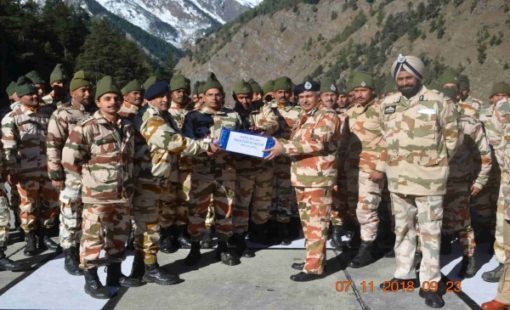 BOOM contacted Vivek Pandey, spokesperson, ITBP who confirmed that the uniformed personnel in the photo are from ITBP. He further said that the photo is from 2016 clicked during the assembly elections that were held in various parts of the country.

"During elections, the Election Commission requests for companies of ITBP and other paramilitary forces to be deployed to the states which are going to polls to ensure law and order. What you see in the photo is a certain section of the ITBP company which was sent to Kerala during the 2016 assembly elections held in the state. They had boarded the flight from West Bengal and were on their way to Kerala,"Pandey said.

Pandey said flying ITBP personnel for election duty is not a new occurrence. "The ITBP companies are generally sent by train but sometimes due to the large number of personnel train travel becomes difficult and hence a flight is booked. In certain cases, if the matter at hand is urgent or there will be considerable time to reach the place via rail then they are sent by flights," he said.

He also informed that there is "no free flights policy" for ITBP and that the expenses for travel (by air and rail) when ITBP personnel are deployed to various states during elections is borne by a fund with the Election Commission called 'election funds' in common parlance. "The money to these funds are contributed by both the state and the centre since elections are a national event."

An unnamed Air India official is quoted in all the stories as saying, "An Air India source told IANS that every day from May 1 to May 5, two Air India 777 flights that can accommodate 320 people each will fly in these para-military force personnel from West Bengal to Thiruvananthpuram. In all, there will be 10 flights that will land in Thiruvananthapuram with these forces and once here, they will be posted in various places of the state." (Read here, here and here) 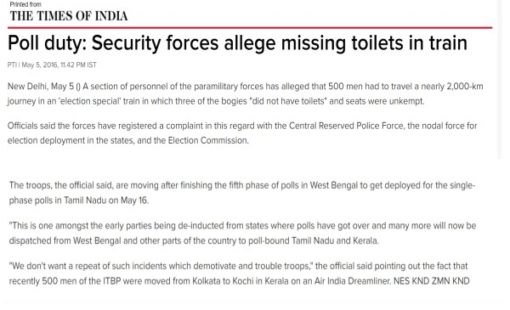