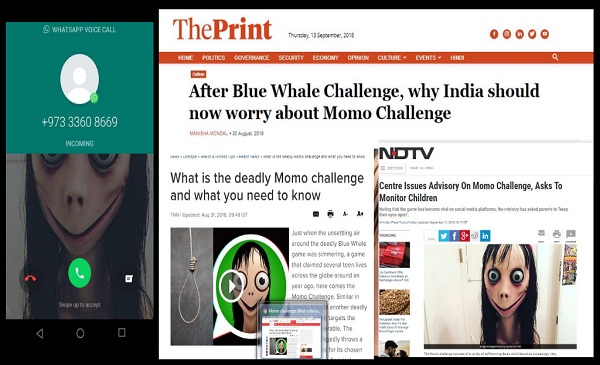 The ‘Momo challenge’, a so-called online suicide game appears to be an exaggerated hoax fueled by poor journalism and paranoia, an investigation by BOOM into the Internet phenomenon has revealed.

In all five cases, police officials refuted claims that an online game was responsible for the suicides.

Wildly speculative reporting by local Indian news outlets coupled with no follow-up into the suicides have kept the hoax alive in India.

Since August this year, news reports in India have called the Momo challenge, a deadlier version of the Blue Whale Challenge - another alleged online suicide game that mysteriously gained notoriety and disappeared just as suddenly in 2017.

News articles described the game's M.O. as follows. An unknown number (Momo) messages teenagers on WhatsApp asking them to play a game. Teenagers are then coerced into carrying out various self-harm challenges which culminate in suicide. Those who resist are bombarded with violent imagery and audio messages.

A grotesque image of a girl with bulging eyes and a creepy smile who looks like a character from a Japanese horror film, has become the face of the game. But the picture is in fact of a cropped photo of a sculpture called 'The Mother Bird' created in 2016 by a Japanese special effects company - Link Factory. Link Factory did not respond to an email and messages sent to its Facebook page. There is no evidence to suggest the studio is connected to the so-called game. 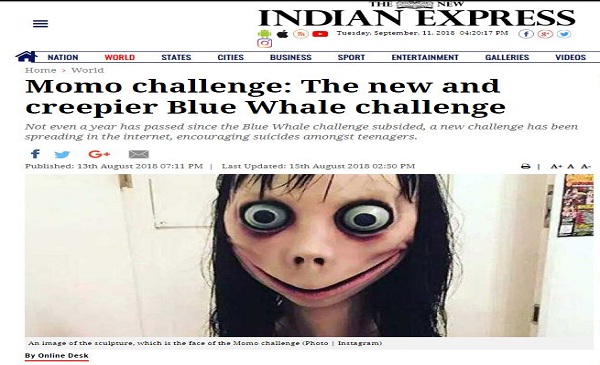 ‘Momo Challenge’ entered the lexicon of the Indian media following the suicide of a 12-year old girl in Argentina in July. News reports said it was the first case (globally) of a youngster taking their life due to an online game called the ‘Momo challenge’. However, a closer look at local Spanish news reports suggest police were also investigating possible sexual abuse as a cause of her death, a detail missed by Indian news reports.

The stories that followed in the Indian media helped popularise the game. What followed was a chain reaction of well-meaning WhatsApp messages warning people about the game followed by hoax messages, prank messages and finally attempts by scammers to take advantage of the paranoia. 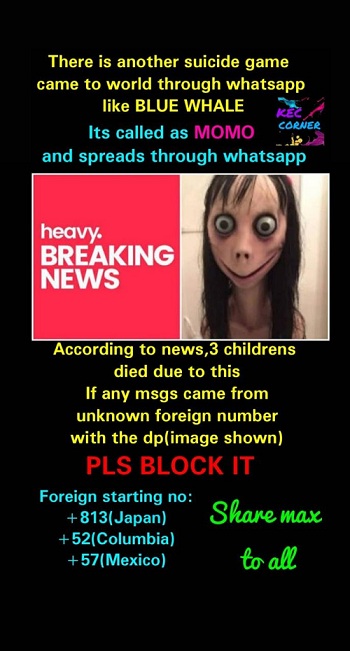 Screenshot of a WhatsApp message warning about the Momo Challenge

India’s Ministry of Electronics & Information Technology issued an advisory on August 27 urging parents to be vigilant.

Food For Thought- How about interacting with us on the widely know #Dial100 than on unknown numbers, to beat the challengers in their own game! #NoNoMoMo #MomoChallenge pic.twitter.com/MJTnGNMV44

In mid-August, news reports said police in Ajmer, Rajasthan were investigating the role of the online game in the death of a Class 10 student who hung herself in addition to slitting her wrist.

"The girl committed suicide in July and post that media reports started suggesting that the girl killed herself due to a game," Rajesh Singh, Superintendent of Police (SP), Ajmer told BOOM.

"We then received a complaint from the parents blaming the game as the cause for their daughter's suicide."

"We spoke to her friends and they told us she had fared poorly in a recently held exam and was very upset because of that. She was very scared of how her parents would react and that led to her to kill herself. She even wrote the same in a suicide note."

The suicides of 18-year old Manish Sarki of Kurseong, Darjeeling on August 20, 2018 and 26-year-old Aditi Goyal, also from the same area, a day later, were suspected to be from playing the Momo game on WhatsApp.

But Pinaki Dutta, Sub-Divisional Police Officer (SDPO), Kurseong told BOOM that they while both the suicides were not connected, police were forced to look for connections following media reports.

“When the suicides were reported, nobody except the local media was interested in the story. But suddenly we started getting calls that this was because of something called the Momo challenge. We had already sent their phone for analysis and found nothing connected to any online game or the Momo challenge,” Dutta explained.

Dutta added that the rumours could have started because Sarki, a teenager was found in a barn with the words, “Illuminati” written on the walls. “The youngster was a huge fan of rap music and he had gone missing from his house. We are guessing that the words are a music reference or existed before his death and are investigating the exact cause.”

In the case of the young woman (Aditi Goyal) police found that she had been depressed for a long time, Akhilesh Chaturvedi, SP, Darjeeling told BOOM.

On August 22, Chetan Rao (20) jumped from the terrace of a government hospital in Chennai. Hailing from Odisha, Rao had come to Chennai a day before the incident and had stayed at the railway station. While newspapers from Chennai including the Times of India did not link Rao's death to the Momo challenge, local Odisha newspapers linked the two. OrissaPost, published out of Bhubaneshwar reported "While the boy died August 22, police clarified that the youth took the extreme step following an online game Saturday."

But when BOOM contacted Chennai police they denied finding any link to an online game in the deceased's phone.

"In his phone we found searches for 'how to commit suicide' from the previous day," S Lakshmanan, ACP, Flower Bazaar area, said. "We also found a train ticket for Chennai from Odisha which showed he had reached the city a day before the incident".

Lakshmanan said the police even questioned the boy's parents who did not talk about or ask about any online game.

The latest case of a suicide allegedly linked to the Momo Challenge is from Odisha wherein 25-year-old Umakant Behera from Mahanga in Cuttack district took his life by hanging on September 4. While he did not leave a suicide note, two days after his death, Behera's parents submitted a complaint to the Mahanga police alleging the role of an online game in his death.

"The parents have submitted a complaint and we are still analysing his phone but prima facie there is no involvement of any game in his suicide," Madhab Chandra Sahu, SP, Cuttack (Rural) told BOOM.