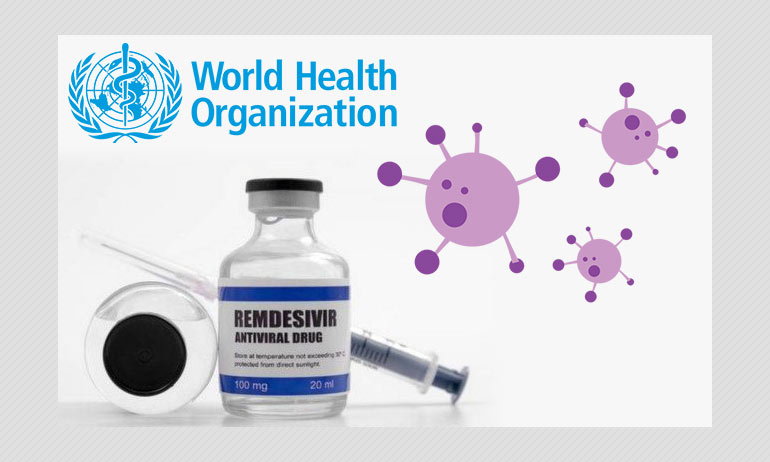 Remdesivir -Gilead Sciences much-touted anti-viral drug does not assist in reducing mortality due to COVID-19 or decrease the hospital stay found the World Health Organization's (WHO) Solidarity trial. In response, the drug maker released a statement suggesting that the Solidarity trial is inconsistent and has not been subjected to a rigorous review.

From the 2743 recruited for being treated with remdesivir, 301 died. In comparison, the control group that did not receive remdesivir recorded 303 deaths from the 2708 participants. The study stated that there was no significant difference in the death rate ratio between the ones who received and did not receive remdesivir. It did not even significantly reduce the duration of staying in the hospital or delay the initiation of ventilation. Remdesivir is widely being used in 5 or 10 doses across the world to combat COVID-19. In India,

Published as a pre-print which still needs to be peer-reviewed, the study reveals the findings of all the drugs that were under the SolidarityTrial. The Solidarity Trial conducted at 405 hospitals in 30 countries across 6 WHO regions aimed to understand the role of repurposed drugs against COVID-19. Hydroxychloroquine, Interferon- B, Lopinavir, Remdesivir, and Ritonavir were under trial.

Earlier, the trial did not find any significant results in the use of hydroxychloroquine and lopinavir and had thus stopped their respective trials on June 18 and July 4, 2020, respectively. "The unpromising overall findings from the regimens tested suffice to refute early hopes, based on smaller or non-randomized studies, that any will substantially reduce inpatient mortality, initiation of ventilation or hospitalisation duration. Narrower confidence intervals would be helpful (particularly for remdesivir), but the main need is for better treatments," discussed the WHO.

The WHO aims to continue assessing other immune-modulators and specific anti-SARS-Cov-2 monoclonal antibodies.

Gilead released a statement responding to the WHO's findings. The company remarked that the WHO trials were inconsistent and poorly designed owing to which no conclusive results can be determined from the study.

"The emerging data appear inconsistent with more robust evidence from multiple randomized, controlled studies published in peer-reviewed journals validating the clinical benefit of Veklury® (remdesivir). We are concerned that the data from this open label global trial have not undergone the rigorous review required to allow for constructive scientific discussion, particularly given the limitations of the trial design."

The SOLIDARITY Trial is a multi-center, open-label global trial that provided early access to Veklury, among other investigational COVID-19 treatments, to patients around the world - particularly in countries where ongoing trials of investigational treatments were not available. The trial design prioritized broad access, resulting in significant heterogeneity in trial adoption, implementation, controls and patient populations and consequently, it is unclear if any conclusive findings can be drawn from the study results," read the statement.

Remdesivir's Rise As A COVID-19 Drug

Remdesivir was being used as an effective drug against COVID-19 globally after many studies highlighted its role in reducing the effects of COVID-19. Gilead, the manufacturer, received emergency use authorization by the US Food and Drug Administration for its temporary use in COVID-19.

Veklury as the drug is being branded is a repurposed anti-viral drug which has not been approved for any use. It is only authorized for treatment of hospitalized patients with severe COVID-19. It is not authorized for the treatment of any other viruses or pathogens, reads Gileads' website. The website also mentions that the emergency use authorization can be revoked at any given point of time.

According to the Adaptive COVID-19 Treatment Trial ACTT-1 study on remdesivir, remdesivir was superior to the placebo in shortening the time to recovery in adults who were hospitalized with Covid-19 and had evidence of lower respiratory tract infection. Around 541 participants received remdesivir while 521 received the placebo in this double-blind trial.

Another meta-analysis of four clinical trials on remdesivir showed thatthe use of remdesivir for patients with COVID-19 was associated with the significantly higher clinical improvement rate compared with standard care alone. A study published in JAMA with 584 participants showed that patients who received a 5-day remdesivir dose had better chances of clinical recovery while there was no difference between standard care and the 10-day course.

As the earlier studies showed that Remdesivir was effective in reducing mortality, its use became widespread. Dr. S.P Kalantri, Professor at Mahatma Gandhi Institute of Medical Sciences, Sevagram had earlier told BOOM in an interview that the clinical trials designed for remdesivir are better than the ones for hydroxychloroquine. He had further stated that as the remdesivir findings had showed conclusive results, remdesivir could be used till further studies negate the effects of the same.

In India, Cipla, Hetero, Zydus Cadila, Dr. Reddy's are already producing remdesivir while Mylan and Jubilant were also working to produce the drug in the country. Maharashtra had even faced a severe shortage of remdesivir in the months of May and June.

Also Read:Has FDA Approved Remdesivir As A Treatment For Coronavirus? Not Quite