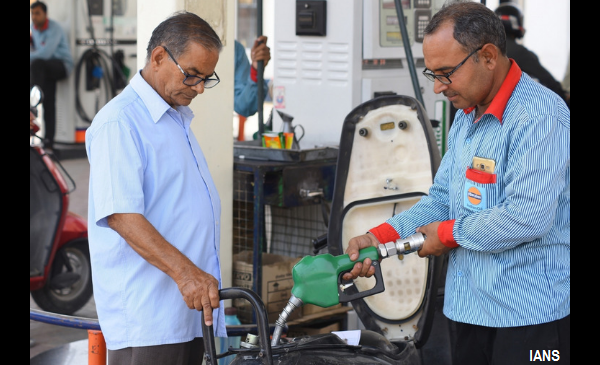 Despite soaring fuel prices with petrol inching towards Rs 90/ L in Mumbai, the central government has ruled out any cut in excise duties on petroleum products.

And as the prices rise, so has the blame game. While the Congress party-led opposition is putting pressure on the government to bring down taxes, the ruling BJP has blamed the massive bills of oil bonds and subsidies from the UPA era for their inability to cut taxes now.

The BJP has pointed this out on various platforms. On September 10, BJP's official Twitter handle said that Modi government paid off the unpaid bills of oil bonds worth Rs 1.3 lakh crore.

What the economist PM Manmohan Singh said & did on petroleum prices? He said that money does not grow on trees & left unpaid bills of oil bonds worth Rs. 1.3 lakh crore. Modi govt paid off the pending bills with interest because 'we should not burden our children'. #NationFirst pic.twitter.com/Z8zTV1kG1i

In June 2018, Petroleum Minister Dharmendra Pradhan said, "Congress party purchased oil bonds of Rs 1.44 lakh crore that we inherited. Not only this, we also paid Rs 70,000 crore on interest part alone. In total, we (govt) discharged our responsibility by repaying over Rs 2 lakh crore." Pradhan said this is one of the major reasons why the country is grappling with high petrol prices.

Our Govt. pays Rs. 10000 Cr interest for this every year & Oil Companies had to sell these bonds at discounts as there was no takers for these. People save for their future generations but our friends in the UPA burdened the future generations for temporary gains & politicking.

So, is the BJP justified in its claims? How much role do the unpaid bills of oil bonds have to play in the current situation? BOOM does a fact check.

BOOM accessed Annexure 6E in the Receipt Budget of 2016-17, 'Special securities issued to oil market companies in lieu of cash subsidy' shows that only two bonds / securities have matured during NDA's term. The outstanding amount of these securities worth Rs 1.3 lakh crore have remained the same since 2014-15 to 2018-19 as more securities were not issued.

When we looked at Annexure 6E in the Receipt Budget of 2017-18, we found the same result. Click here.

The current NDA government had inherited an outstanding bill of Rs 1.3 lakh crore owing to oil bonds. And the total payment towards repayment of oil bonds and interest between 2014-18 amounts to approximately Rs 44,000 crore (Rs 3,500 crore as principal amount and the rest as interest).

BOOM sent an email to the office of Petroleum Minister Dharmendra Pradhan to confirm if he was referring to the amount paid or that is due. However, we are yet to receive a reply.

Can the government pre-pay these oil bonds or set aside money for these future payments?

No, say experts as it is not feasible in the Indian budgeting system. This is because, "Indian government budgets are prepared based on cash and not accrual basis," said former oil secretary SC Tripathi to BOOM.

Tripathi said, "The government will budget for the payment in the year when it is due and not in advance."

Ranade explained that bonds are issued because you do not have money now, therefore you borrow from investors or public by issuing bonds. Every year governments run a deficit and it is financed through bonds. And, usually bonds have long life which could be for 15 or 20 or 30 years and are obligations to pay in future. Due to its long life, it is also handed over to successive governments and they are obligated to make these payments whenever it is due. Default in payment can have serious consequences and can lead to a market shock.

Both Ranade and Tripathi were of the view that bond financing is a normal part of government functioning and a continuous affair.

Thus, between 2005-10 to keep fiscal deficit under control, the government introduced oil bonds to reimburse OMCs so that domestic fuel prices did not shoot up with soaring crude oil prices.

What are oil bonds and was issuing it necessary?

Oil bonds are a kind of special securities / bonds issued by the Government of India to public entities like Oil Market Companies (OMC), Food Corporation of India and Fertilizer Companies as a substitute to cash subsidies, according an RBI report. These bonds are debts that do not reflect in the fiscal deficit in the issuing year as there is no cash flow involved unlike cash subsidies. Unlike Government securities (G-secs), oil bonds are not eligible under SLR security but can be used as collateral for repo transactions. Oil companies who require liquid cash, could sell these in the secondary market to banks, insurance companies and they also receive interest from the government.

Issuing of oil bonds was adopted only during 2005-06 to 2009-10. It was a way of deferring payments due to the oil companies as the UPA government was cash strapped, explained Madan Sabnavis, Chief Economist, Care Ratings Limited.

The UPA government had issued oil bonds worth Rs 1.4 lakh crore between 2005-06 to 2008-09, to compensate OMCs who incurred under recoveries to the count of Rs 2.9 lakh crore owing to high international crude oil prices and the regulation of oil prices by the government, according to the Expert Committee report under Kirit Parikh. (Note: Under-recoveries are difference between the price at which the crude oil is purchased internationally and the retail selling price of refined petroleum products).

Between 2005-09, the crude oil prices were showing an upward trend (See graph below), economies were in the midst of the global economic crisis and most importantly OMCs were facing huge under recoveries. In this situation of fiscal slippage and cash shortage, the UPA government chose oil bonds as the way out to moderate fuel prices.

In order to tackle this crisis, the government adopted a burden sharing mechanism of all the stakeholders - the Government, the Public Sector Oil Companies and the consumer as follows.

However, in Budget 2010-11, the government announced the discontinuation of oil bonds and that OMCs will be reimbursed in cash. And, the same year in June 2010, petrol prices were deregulated.

Petrol and diesel prices were decontrolled / market determined with effect from 26.06.2010 (under UPA) and 19.10.2014 (under NDA), respectively. The NDA government has adopted dynamic fuel pricing since June 2017, whereby retail prices change on a daily basis.

What is the current state of taxation?

In May 2014, while taxes comprised of 31% of petrol prices (as per price build up in Delhi), in September 2018 a customer pays 45% as taxes on petrol. This would be higher in the case of Mumbai. (Click here to read more on taxation of fuel and price build up)

It cannot be denied that owing to low international crude prices since 2014, the Modi government has received a windfall gain by consistently raising excise duties and not passing on the benefit to the end consumer.

What can the government do now to give some relief to customers?

Several experts have pointed out that it is time petroleum products are brought under the GST. But with a lower uniform GST rate across the country, it will mean huge losses to both the centre and the state which does not make it feasible in the immediate future. Either ways, State governments are also resisting any move to reduce their state taxes on fuel since most of them are battling revenue deficit ever since GST came into force in 2017.

Central excise duties have also become a major revenue source and has played a major role in financing social and infrastructure spending. Ranade pointed out that the government has committed to un-budgeted obligations like loan waivers, Ayushman Bharat etc. Moreover, the ambitious target of maintaining fiscal deficit at 3.3 % when the promise was 3.0 %, is a huge task in front of the government. Under these circumstances, the government is in a tight corner.

If a relief is to be given this year, one approach would be to postpone this year's capital spending to the next year, said Ranade.

Dhananjay Sinha of Emkay Global was of the view that steps are to be taken to stabilize the currency and to cut revenue expenditure to maintain fiscal deficit. India's import dependence stands at 80% and fuel is an essential commodity. Therefore, the depreciation of the rupee makes crude oil expensive for the country. In this calendar year alone, rupee has depreciated 13% thus making import of crude more expensive.

Claim :   Modi Govt Has Paid Back UPA-era Oil Bonds Of Rs 1.3 Lakh Crore
Claimed By :  BJP
Fact Check :  FALSE
BJP Congress diesel excise duty featured fuel GST Inflation Narendra Modi NDA Oil bond Oil companies OMC Petro Bonds petrol petrol price subsidy Tax UPA
If you value our work, we have an ask: Our journalists work with TruthSeekers like you to publish fact-checks, explainers, ground reports and media literacy content. Much of this work involves using investigative methods and forensic tools. Our work is resource-intensive, and we rely on our readers to fund our work. Support us so we can continue our work of decluttering the information landscape. BECOME A MEMBER
📧 Subscribe to our newsletter here. 📣You can also follow us on Twitter, Facebook, Instagram, Youtube, Linkedin and Google News 📝Stay updated with all our latest fact check stories.