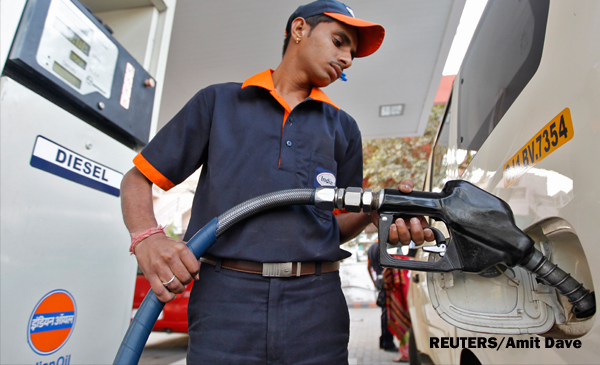 Soaring fuel prices have been in the headlines over the past few weeks as the Narendra Modi led BJP government came under fire on social media for failing to rein in prices . In 2012, when crude oil prices were at $111.9 per barrel, petrol prices were at Rs 70 per litre. Today with crude oil prices having fallen more than 50%, retail selling prices of petrol and diesel remains the same or even higher.

In this fact file, we answer some of the commonly asked questions about fuel prices and why they continue to remain high despite fall in international crude oil prices.

1) How has oil prices changed with crude oil prices? 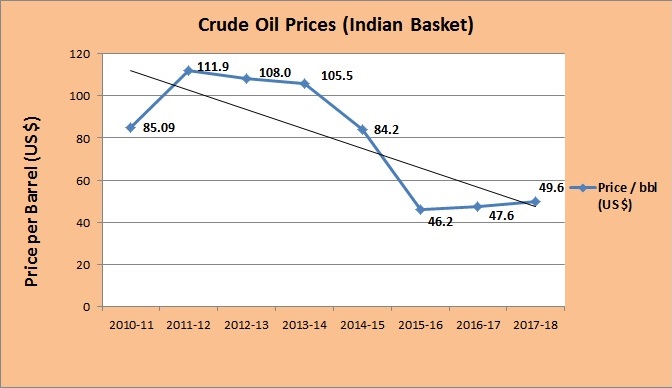 Now, let us look at Retail Selling Prices (RSP) of petrol and diesel since 2012.

The drop in crude oil prices by half is not reflected in retail selling prices (RSP) of petrol and diesel. RSP of petrol has crossed Rs 70/ L and RSP of diesel is around Rs 60 / L in Delhi and Mumbai.

And more so, after the implementation of dynamic fuel pricing since June 2017, we see a steady increase in retail selling prices of petrol and diesel. Dynamic pricing refers to revision of fuel prices based on international prices on a daily basis.

2) Why are we still paying more for petrol if crude oil prices have gone down?

We see that taxes form a major part of retail selling prices. Therefore, the reason for high oil prices is the high taxes levied on petrol / diesel.

3) How has tax share in oil prices changed over time?

It is a fact that both central and state taxes have increased over time. And, the increase in the rate of taxes has clearly increased the share of taxes in the prices we pay for petrol and diesel at the pump. 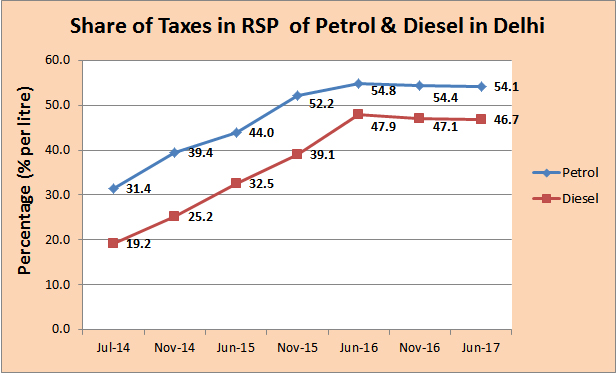 4) Of the tax we pay, what goes to the centre and to the state?

In the recent times central taxes have increased steeply owing to a large share in oil retail selling prices. And, if we are to compare the increase in tax rates, the centre gets more than the states. 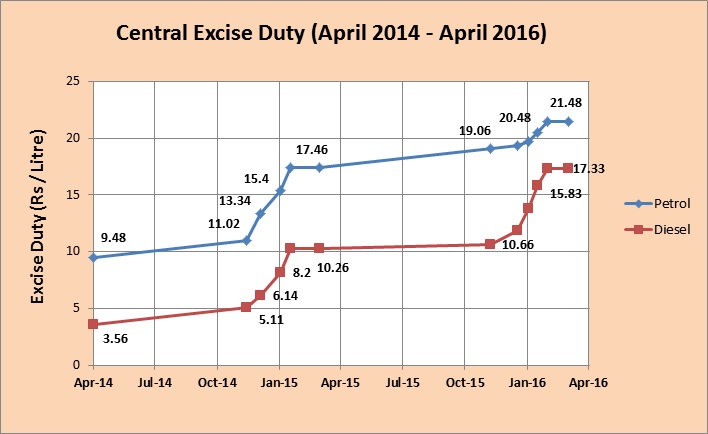 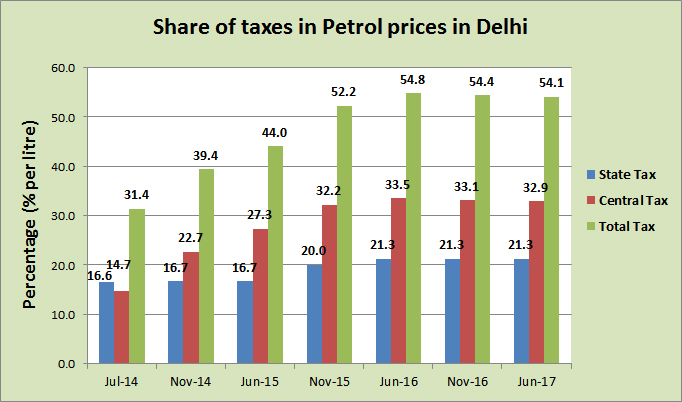 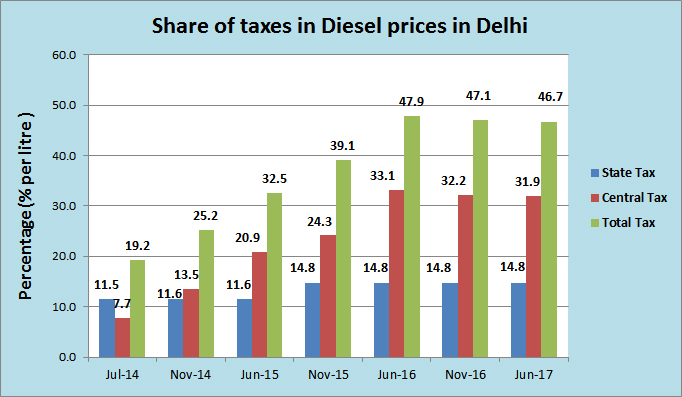 5) What about VAT rates in other states?

Like Delhi, other states have also increased rates of state VAT. Effective state VAT on petrol and diesel in top 10 states (as of March 2017) are as below:

The states in their bid to increase revenue have indeed increased the effective VAT rates. However, it has not been as steep as the increase in central taxes.

Though data on exact tax revenue from the sale of petrol and diesel are not available, data on total tax revenue on Petroleum products (POL products) are available. It includes revenue collected from the sale of petrol, diesel, PDS kerosene and LPG. While state VAT rates on petrol and diesel are mostly above 20%, VAT rates on PDS kerosene and LPG have not crossed 8% in any of the states / UTs.

The graph below places central and state tax revenues side by side. 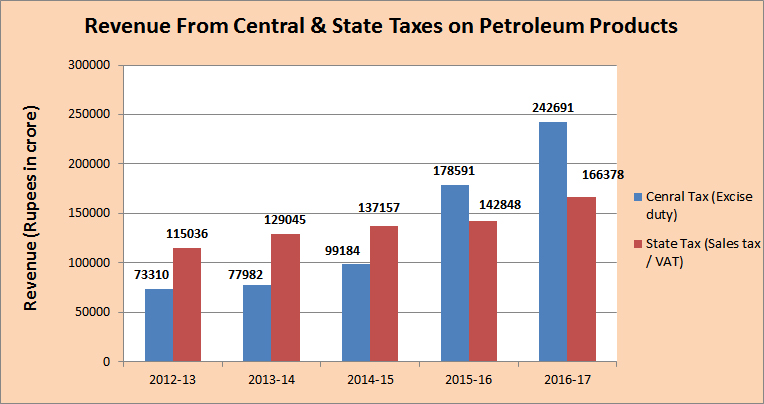 What we see in the graph is a stark difference in the increase in sales tax revenue and central tax revenue.

But what could explain the increase in central tax rates which has led to exorbitant petrol prices?

“One part of the fall in oil prices as a part of proper economic and fiscal planning goes to the consumer; the second part is going to developmental activities, particularly national highways and rural roads, because those who consume petrol and diesel drive vehicles on these roads, and they must pay for it. The third part is being consumed by the states by way of VAT. Of what the central government gets, 42% is being passed on to the states. And the fourth part, let me tell you, goes to the oil companies for the reason that when oil companies make international purchases against future purchases, they suffer a huge loss. They buy at 80 dollars; by the time they sell, the price has become 60 dollars. At one stage, the loss of the oil companies was as high as Rs 40,000 crore.” - said Finance Minister Arun Jaitley, in Rajya Sabha on December 16, 2015.

‘The government cannot change fuel pricing on a knee-jerk basis’, said Dharmendra Pradhan, the Petroleum Minister. “The government will not interfere in the day-to-day functioning of the OMCs… for the last three years, the pricing mechanism has been linked to the market,” he said.

While the BJP took a strong economic position as they defended the prices, people have pointed out that it is doublespeak on their part.

8) How did the BJP’s stance differ on the issue of high petrol prices before coming to power?

An old tweet and video by Narendra Modi during his term as Gujarat chief minister were revived on social media to remind him of his pre-election promise to reduce the burden on the aam aadmi. 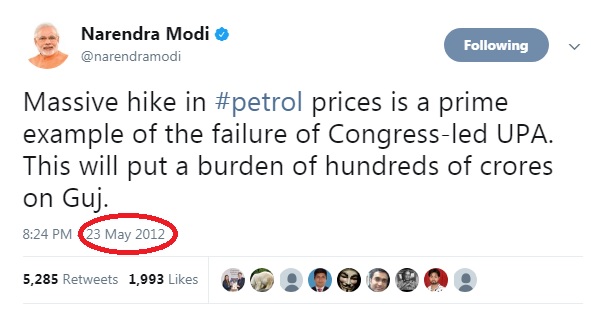 While Taxes stood on 34%

BJP central excise Crude oil Delhi diesel diesel price featured fuel price India Mumbai Narendra Modi NDA petrol petrol price Petroleum Sales tax Tax UPA VAT
If you value our work, we have an ask: Our journalists work with TruthSeekers like you to publish fact-checks, explainers, ground reports and media literacy content. Much of this work involves using investigative methods and forensic tools. Our work is resource-intensive, and we rely on our readers to fund our work. Support us so we can continue our work of decluttering the information landscape. BECOME A MEMBER
📧 Subscribe to our newsletter here. 📣You can also follow us on Twitter, Facebook, Instagram, Youtube, Linkedin and Google News