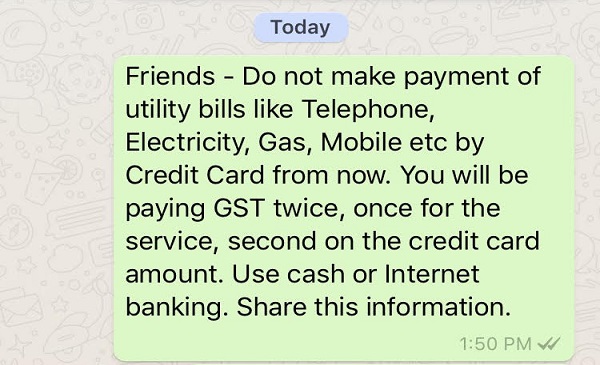 As the country moves to a one nation, one tax regime, social media is on fire with various messages about its actual impact on consumers. One such message that has gone viral since the last few days claims that a consumer will be subjected to double taxation under GST when he chooses to make his utility bill payments via credit card. The inference being that you will be charged GST on your utility bill and on the credit card billed amount as well. The message urges people to avoid double taxation by paying cash for utility bills.

The scare created by this viral message forced Revenue Secretary Dr Hasmukh Adhia to clarify through a tweet on Sunday. Adhia tweeted that there will not be any case of double taxation and urged people not to circulate such messages without confirming with the relevant authorities.

1/2 A wrong message is doing rounds on social media that if u make payment of utility bills by credit cards,you will be paying GST twice.

2/2 This is completely untrue. Please do not recirculate such message without checking it with authority.

The fear of double taxation is unfounded due to multiple reasons. If you check your past credit card bills, you will find that if you have managed to pay your bills on time, there was no service tax. The tax was only applicable on annual charges, interest payment, processing fees of EMIs and not on the billed amount. This service tax was charged at 15% which will now be replaced by GST at 18%.

Both these examples show that there were no taxes applied on the billed amount but only the additional charges levied by the bank which were seen as an additional service offered to the consumer. This will now be charged as GST. Banks have sent messages to their customers informing them about the change in taxation. 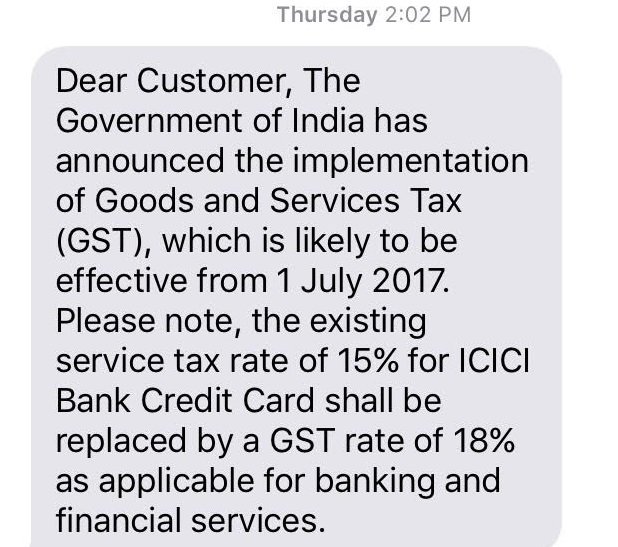 Dr Hasmukh Adhia Goods and Services Tax GST ICICI Bank Kotak Mahindra Bank Service Tax Twitter utility bills WhatsApp
If you value our work, we have an ask: Our journalists work with TruthSeekers like you to publish fact-checks, explainers, ground reports and media literacy content. Much of this work involves using investigative methods and forensic tools. Our work is resource-intensive, and we rely on our readers to fund our work. Support us so we can continue our work of decluttering the information landscape. BECOME A MEMBER
📧 Subscribe to our newsletter here. 📣You can also follow us on Twitter, Facebook, Instagram, Youtube, Linkedin and Google News