A fake message warning people about government monitoring of phone calls, Facebook, Twitter and WhatsApp has made a comeback. But this time the message is going around in Bengali.

The message claims that a government ministry is monitoring all our social media activities. The message even claimed that if you are a group admin, you can get in trouble and even be arrested if forwards in the group include messages on any political and religious debates as it is a punishable offence. To add more credibility to the warning, the message also gives the url of the Kolkata police Facebook page and requests people to post questionable links to their inbox on the social media platform. 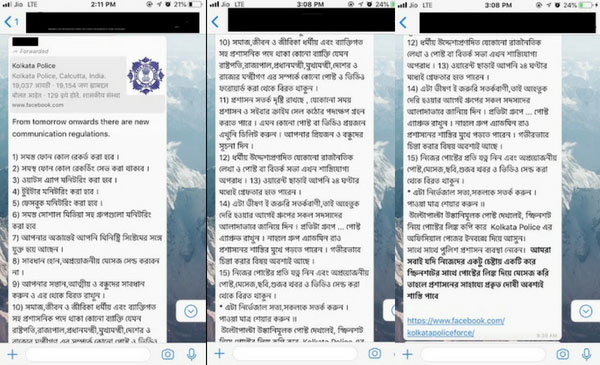 While concerns about government snooping on citizens is a persistent worry, the message is fake on multiple levels. Firstly, WhatsApp is encrypted end-to-end which makes it impossible for anyone to actually monitor or track it unless your device is hacked. Secondly, there is no such Ministry of Internal Regulation as mentioned in some of the messages.

The message is a rehash of a viral forward that went around on social media in English sometime back. BOOM debunked the message in July, 2018. Read the full story here. Earlier this year, Bloomberg had reported about a tender posted online by the Ministry of Information and Broadcasting,Vir seeking the services of a company to provide analytical software and a team of at least 20 professionals to power a real time New Media Command Room. The company had to display its abilities to monitor social media feeds and analyse sentiment and also build a 'Predictive Analytics' tool that could help the government intervene in social media and internet news/discussions to give a 'positive slant for India'.

The move met huge resistance from opposition parties and civil rights activists who called the Social Media Command Room a mass surveillance exercise. In August, the government informed the Supreme Court that they have withdrawn the tender after judges hearing an ongoing case about privacy expressed their concerns about the command room resulting in creation of a surveillance society, reported The Financial Times.