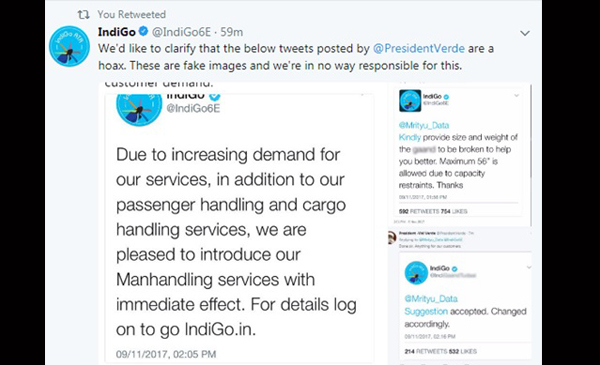 Here's a round-up of fake news this week.

We begin with airlines in India, which seem to be having a forgettable week, after a video emerged of two IndiGo ground staff getting into a fist fight with a passenger on the tarmac. The incident which took place in October has created a PR storm for the company and provided the Internet a chance to troll IndiGo. Understandably the airline is leaving nothing to chance but on Thursday it went out of its way to debunk what was very obviously photoshopped tweets that claimed the airline offered ‘manhandling’ services. Read BOOM's factcheck here - Under Fire IndiGo Says Tweet Offering ‘Manhandling’ Services Is A Hoax 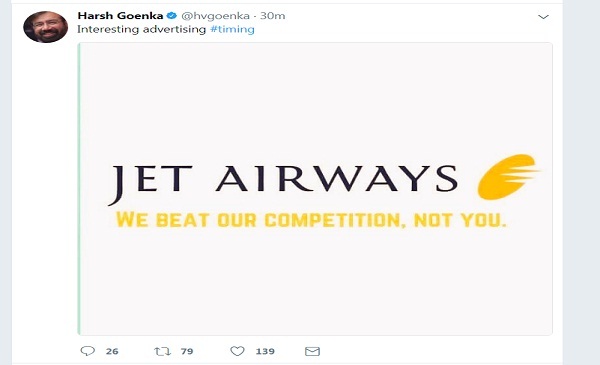 A cheeky ad sporting a Jet Airways logo and taking aim at Indigo after a video of Indigo’s staff manhandling a passenger emerged on Tuesday, has not been created by Jet Airways. In fact the airline published a statement on Twitter distancing itself from the online ad and said that it was in bad taste. Read BOOM's factcheck here - Fake: Jet Airways Did Not Create This Ad To Ambush IndiGo 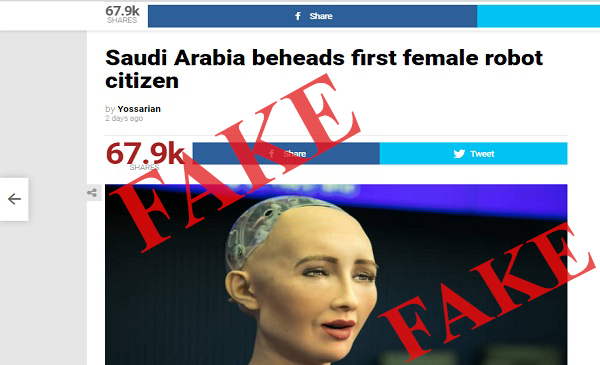 Did Saudi Arabia 'behead' a female robot because it appeared in public without its head covered and was not accompanied by a male guardian? False. The story has been created by US satirical website Duffel Blog. Earlier this week Duffel Blog conjured a story about how Sophia, who was recently granted Saudi citizenship, the world’s first robot to attain such legal status, was beheaded at a public square in Riyadh. Read BOOM's factcheck here - FAKE NEWS: Saudi Arabia Did Not Behead Its First Female Robot Citizen

And you can catch all these stories and more with BOOM's Jency Jacob and Suyash Barve on our new show Fact Vs. Fiction.

fake news featured Indigo Jet Airways Saudi Arabia Sophia the robot
If you value our work, we have an ask: Our journalists work with TruthSeekers like you to publish fact-checks, explainers, ground reports and media literacy content. Much of this work involves using investigative methods and forensic tools. Our work is resource-intensive, and we rely on our readers to fund our work. Support us so we can continue our work of decluttering the information landscape. BECOME A MEMBER
📧 Subscribe to our newsletter here. 📣You can also follow us on Twitter, Facebook, Instagram, Youtube, Linkedin and Google News 📝Stay updated with all our latest fact check stories.