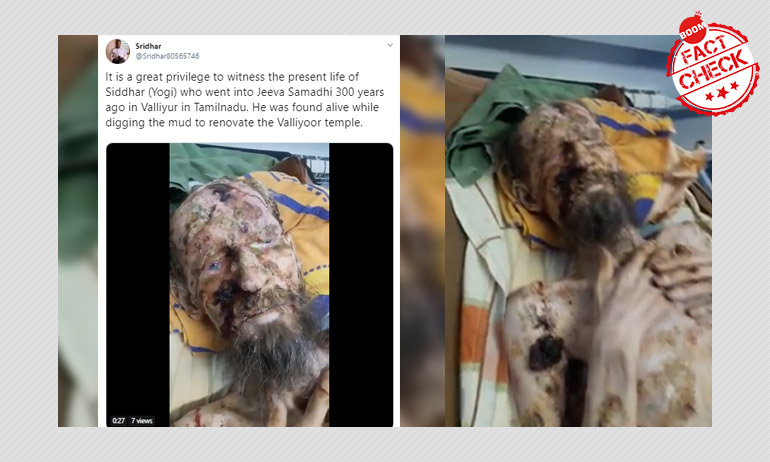 A video of a man with an aggravated case of psoriasis from Kazakhstan is being shared over WhatsApp and social media in India as a yogi in a transcendent, meditative state for 300 years who was found alive after digging around a temple.

The graphic video shows a man in a haggard state covered with mud, blood and several sores oozing with fluid, laying in a hospital bed. The age or ethnicity of the man is barely identifiable from the video, however when asked his name in aa foreign language his answer of 'Alexander' is audible.

The context with which this same video is being shared with in India recently, is of a yogi being found alive in Valliyay, Tamil Nadu after his meditating for 300 years.

The caption states: "It is a great privilege to witness the present life of Siddhar (Yogi) who went into Jeeva Samadhi 300 years ago in Valliyur in Tamilnadu. He was found alive while digging the mud to renovate the Valliyoor temple. Siddhar is seen sitting in Yogasana. Om Namah Shivaaya 🙏"

The message is particularly being shared over messaging application WhatsApp, and BOOM received the same video requesting for its verification on our helpline number (+91 77009 06111).

Across social media it is similarly captioned.

The 'Jeeva Samadhi' being referred to in all the falsely captioned messages and posts is a practice of ancient Hindu sages or 'holy men' which is a state of deep meditative contemplation. It is a means to attain a higher consciousness and implies advanced spiritual power.

BOOM found that this video has previously been viral with false contexts and was fact-checked internationally. Reverse image searches and video analysis tools, lead us back to the fake news stories arising from the same video. Originally captured in June 2019, the video was filmed by a surgeon in Aktobe Medical Centre, Kazakhstan of 'Alexander' with an acute case of the skin disease, psoriasis. The surgeon shared the footage with his friends which led to the varied false and viral contexts it was posted with and reported in the media.

Earlier reports in Russia claimed that the man had survived over a month trapped in a bear den in Serbia, and was rescued by hunting dogs. These rumours were rubbished by news sources like The Independent later. Another narrative viral in Russia was a montage of images of the man with a voice over stating that 'Alexander' had emerged from a tomb in a cemetery in the Russian city of Sochi.

Most of the false narratives originated from YouTube and syndication service, EADAily, also ran the fake miraculous bear escape story. The story also reached overseas and was reported in the UK and Europe. The news agency ran a story 2 days later clarifying their innacuracy in publishing the earlier report. The language heard being spoken by a man and woman in the video who are not captured in the frame, was identified as not Russian but possibly the one spoken in Kazakhstan.

As being shared in India, the video claims the yogi is sitting in 'yogasana' which are the varied postures in the Indian aerobic discipline of Yoga. While yogsana identifies about 84 postures, not any of the laying down 'asanas' even remotely correspond with the posture of the man in the hospital; who is merely lying down.

AFP spoke with the director of Aktobe Medical Centre – Rustem Isayev – in July 2019 who confirmed that the man in the viral video was his patient and was not attacked by a bear. Isayev said the man's name was Alexader P and was suffering from psoarisis. "He came to us 15 days ago and we treated him. When his condition improved we discharged him. He is a citizen of Kazakhstan and a resident of Aktobe," Isayev told AFP.