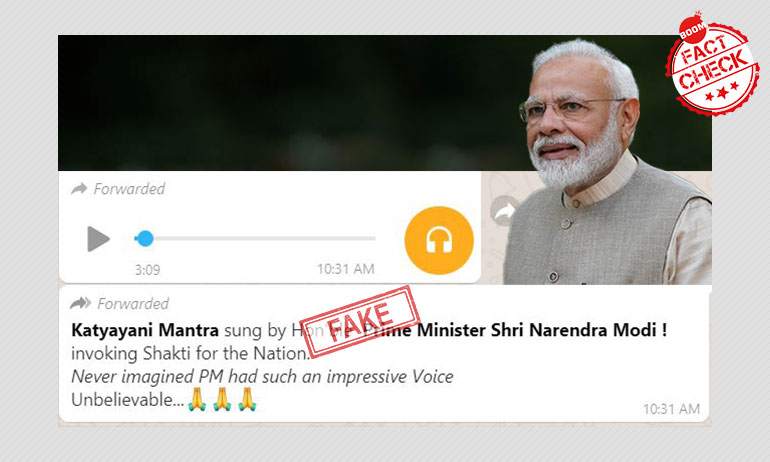 An audio message of a person singing the Katyayani Mantra is being shared with a false claim that it was sung by Prime Minister Narendra Modi.

BOOM received the viral audio on its WhatsApp helpline number (7700906111) inquiring about it.

We searched with the viral caption on YouTube and found that a video uploaded on February 4, 2019, with the same audio falsely claiming that PM Modi had sung the Katyayani Mantra.

On scanning the comments, we found users pointing out that the mantra was not chanted by the prime minister but was sung by an All India Radio (AIR) artist Jithendra Singh.

We searched with the keywords 'Jithendra Singh' and 'Katyayani Mantra' on YouTube and found the original clip uploaded by All India Radio with the title - 'Mata Kaatayayani Stuti - Navratri Day-6' uploaded on September 25, 2017.

The description of the video states that it was sung by Jitendra Singh. AIR had recorded a compilation of Nava Durga Stotra on PM Modi's special request, in which Jitendra Singh was roped in to record nine different pieces along with other artists reported India Today on September 25, 2017.

PM Modi had also tweeted the mantra with a link on the sixth day of the Navratri week on October 15, 2018. However, nowhere it is stated that it was sung by PM Modi.

Maa Katyayani, give us the strength to always work towards empowering the poor and marginalised. With your blessings, may good always prevail, may there be justice for all. https://t.co/sz4vQDSua2