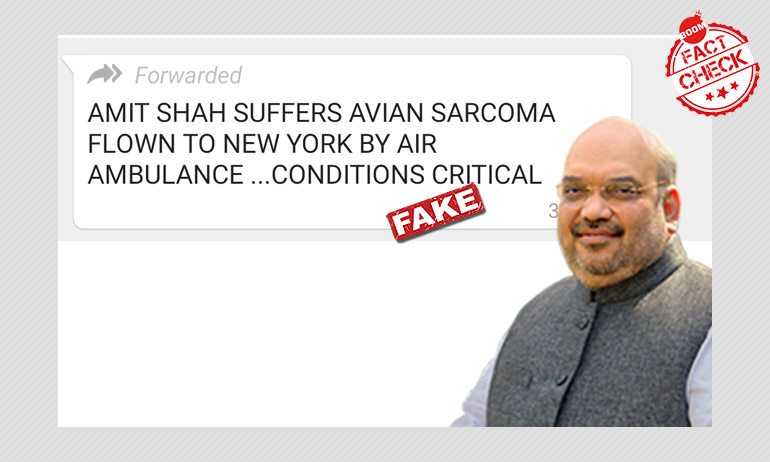 A viral message circulating on social media falsely claims that Indian Home Minister Amit Shah was flown to New York by an air ambulance for receiving treatment for a cancer called Avian Sarcoma.

BOOM found that both the claims are false. Firstly, Shah is in India as he attended an event in Delhi through video-conferencing on September 30. Secondly, there is no scientific evidence suggesting that avian sarcoma is found in humans.

On performing a keyword and date-wise search, BOOM found a tweet by the Home Minister's office announcing Amit Shah's presence at a video conferencing event for 200 potters from Gandhinagar, Gujarat his constituency.

Shah shared images from the event on his Facebook profile on September 30 showing him interacting with these members from the community. In the Facebook post, Shah shared that the Modi government is supporting the potters' union through the Kumhar Sashaktikaran Yojana, an initiative of the Khadi and Village Industries Commission (KVIC)

Shah's health has been under the spotlight since he was hospitalised twice after recovering from COVID-19. The Home Minister tested positive on August 2 and was admitted to Medanta Hospital in Gurgaon. After testing negative, he was taken to AIIMS on August 17 as he felt uneasy. He was discharged on August 31 but re-admitted on September 13 for regular check-up according the hospital's bulletin.

Moving to the second claim in the message, BOOM found that avian sarcoma is a type of cancer that affects chickens. This disease is caused by avian sarcoma virus. There is no scientific evidence supporting that this virus transmits to humans from chickens.

Sarcoma is a type of cancer caused due to unregulated proliferation of the connective tissue leading to the formation of a tumor. Studies show that when injected into rats, hamsters, guinea pigs, cats, dogs, and sub-human primates, this avian sarcoma virus could induce brain tumor.