A video showing police officials apprehending a burqa-clad person is viral with false captions claiming that the arrested man is a Rashtriya Swayamsewak Sangh member and was waving a Pakistani flag.

BOOM found that the claim was false and the man, along with his partners, was arrested for allegedly smuggling illegal liquor in Kurnool, Andhra Pradesh. Chief Inspector (Excise) Lakshmi Durgaiah, who led the arrest, told BOOM that the accused were neither hoisting any flag nor did they have any known RSS connection.

The viral video shows a police officer asking a burqa-clad person to remove the cloth. The person turns out to be a man who then squats along with other men apprehended by the cops.

A Hindi caption with the viral post (archive) translates to 'This RSS pimp was waving a Pakistani flag while dressed in a burqa. Muslims, be alert. This seems to be a new ploy to defame the community'. 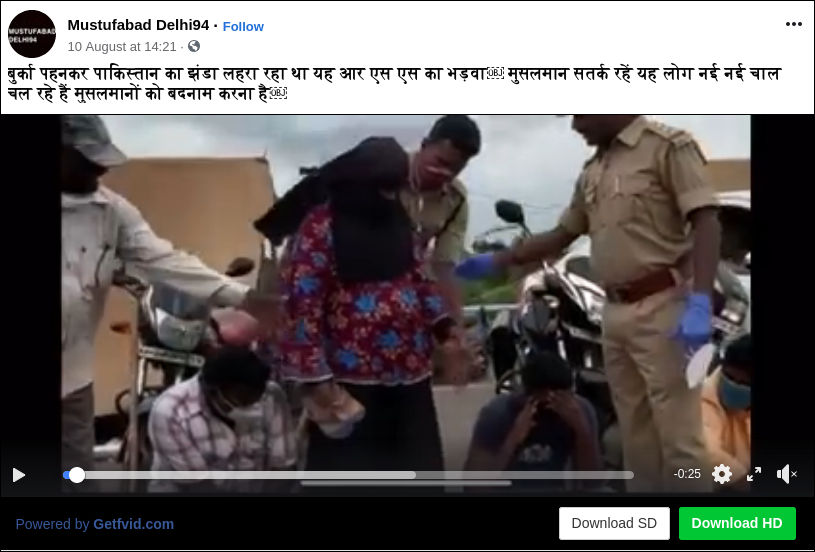 Another post (archive) with the same video has a Hindi caption which translates to 'An innocent bhakt caught in burqa. He was trying to defame Muslims'.

View the archives here and here. 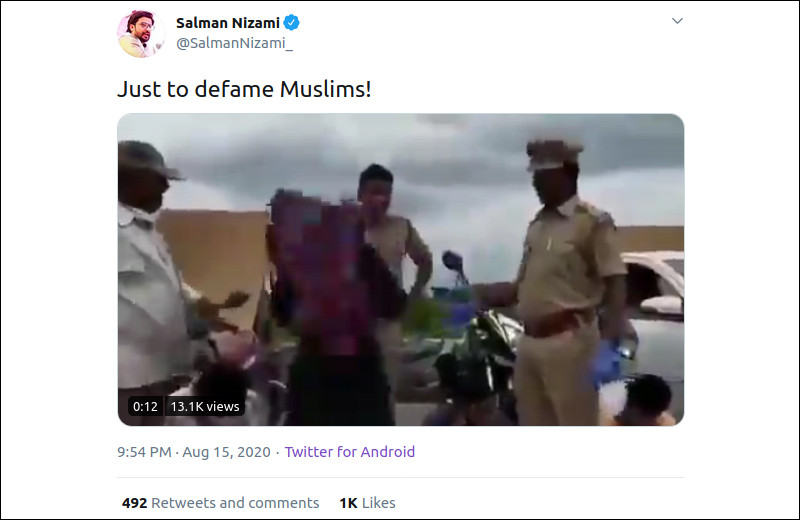 Also Read: Video Of Bahrain King's Robot Bodyguard? Not Quite

While going through the comments section of the posts, BOOM found that some users had claimed that the video was from Kurnool, Andhra Pradesh and was concerned with liquor smugglers.

Taking cue from the comments, we did a keyword search with 'transporting liquor wearing burqa in kurnool' and found the same video uploaded on YouTube channel of ETV Andhra Pradesh on August 7, 2020.

The headline of the video reads 'Several Arrested | for Transfer Illegal Liquor with Wearing Burqa | at Kurnool Dist.' Watch the video below.

We also found a report published in Telugu news portal NTV that had carried screenshots from the same video.

The report mentions that the police had arrested burqa-clad men who bought liquor at cheaper price in Telangana and sold them at higher prices in Andhra Pradesh.

BOOM then contacted a local reporter in Kurnool who confirmed to us that the incident shown in the video did happen in the district, and sent us an extended version of the clip. The longer version of the video shows the apprehended men squatting in front of the confiscated liquor bottles.

BOOM also contacted Chief Inspector (Excise), Kurnool district, Lakshmi Durgaiah who had led the arrests. The inspector denied any communal angle in the the crime.

"These men are liquor smugglers, and they were wearing burqas to hide themselves. They have no known connections to the RSS, and were not hoisting any kind of flag," he told BOOM.

Also read Tokyo 2020 Olympics Fireworks Show? No, It Is A Simulated Video