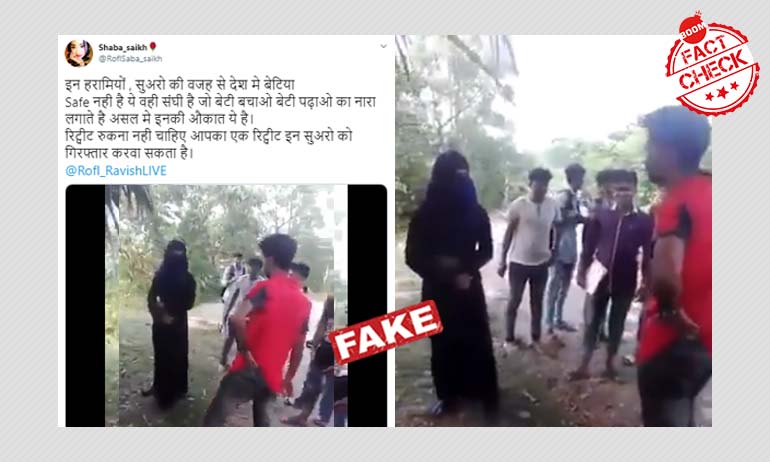 A video from Bangladesh of a group of men harassing a woman is being shared with false claims that it is from India.

The video is doing the rounds with people asking for the men to be arrested and also linking the incident to safety of women in India. The clip, filmed in a deserted road, show the men moral policing and abusing the woman for allegedly being caught hanging around with her male friend.

Below is the viral clip, which has been viewed more than 1.6 lakh times, at the time of writing this article. Click here for the archive of the tweet.

This is one of the reasons why poll ranks #India the world's most dangerous country for #women.
pic.twitter.com/mLmI6kETKq

The same footage is also doing the rounds on Facebook with the same caption.

BOOM was able to ascertain that the video is from Bangladesh as the men could be heard speaking in a dialect of the language familiar to the country..

At 42 second mark in the viral footage, one of the men can be heard asking the woman about her residence and says, "Where is your house, tell me. (Basha kothay, amar kachhe bol?)" A few moments later into the footage, the man again interrogates her about her name and address.

At 1.45 minutes he again asks the woman, "What is your name? Where do you stay? (Tomar naam ki? Basha kothay?)... Is your home at Tekerhat? (Basha ki Tekerhate)" . When the woman affirms that she is from Tekerhat, the harasser asks, "Where in Tekerhat?" (Kon jaygay Tekerhat?") An individual from the group of harassers can be heard saying, "Whatever place it is, it is within Tekerhat. (Jei jaygay houk, Tekerhat to.)"

A search for Tekerhat showed us that it is an area in Bangladesh's Rajoir Upazilla - under the Madaripur District in the Division of Dhaka. The same was confirmed with the BOOM Bangladesh team.

Additionally, we broke the video into its key frames and ran a reverse image search. We came across a longer footage of the same incident, which was uploaded on a Facebook page Arian Apon Bahar in July, last year.

According to the conversation in the longer footage, the woman was with a male friend when they were stopped and questioned by a group of men about why they were alone in the area. By the parlance among the men, the woman's friend had fled the area and they can be heard schooling the woman for roaming around with a man in public. They further ask for her father's number and rummage through her belongings to find her contact details to inform her residence, about her "immoral activities".

The same video was uploaded to YouTube in November, 2018 with the caption, "See what hijab clad woman has done".

While BOOM could not independently verify the year when the video was shot, it is certain that it is from Bangladesh and an old footage.

Video From Bangladesh Shared As Distressed Muslims In Bengal