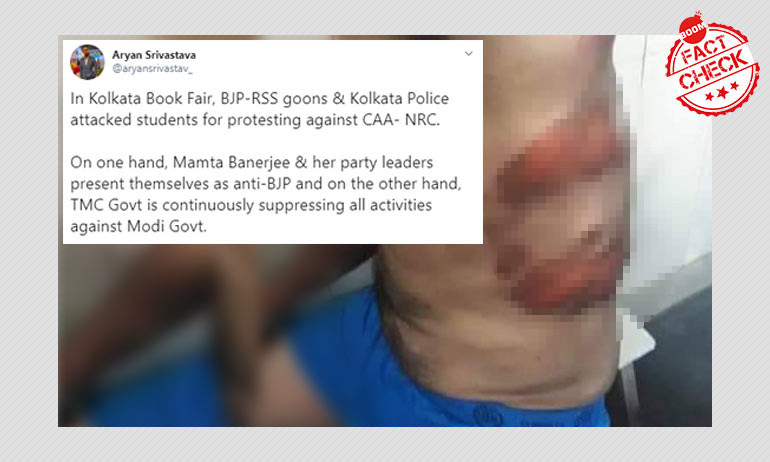 A disturbing image of deep lacerations on the side of a man's rib cage is doing the rounds on Twitter with claims that it is from the ongoing International Kolkata Book Fair, where a student was attacked for protesting against the Citizenship Amendment Act (CAA) and National Register for Citizens (NRC).

The photo shows a side view of a bare bodied torso, which is badly bruised.

The tweet claims that a student was injured after members of the Bharatiya Janata Party (BJP) and Rashtriya Swayam Sevak (RSS) attacked the former in the premises of the Book Fair for raising slogans against the new Citizenship Act. It further adds that the Kolkata Police backed the assailants.

According to reports, scuffle broke out between anti-CAA protesters and BJP supporters at the International Kolkata Book Fair on Saturday. This was triggered when senior BJP leader Rahul Sinha visited stalls of a BJP mouthpiece at the fair and a section of Left-backed students' body (Students Federation Of India) surrounded him and raised slogans against the CAA. The Bidhannagar Police confirmed the incident and said five protesters were detained.

BOOM found that the image is originally from June, 2019, after a scuffle broke out between a Sikh driver and the cops in Delhi's Mukherjee Nagar. The former's vehicle grazed past a Police Control Room (PCR) van after which he attacked a cop with a sword.

The tweet reads: In Kolkata Book Fair, BJP-RSS goons & Kolkata Police attacked students for protesting against CAA- NRC. On one hand, Mamata Banerjee & her party leaders present themselves as anti-BJP and on the other hand, TMC Govt is continuously suppressing all activities against Modi Govt.

On one hand, Mamta Banerjee & her party leaders present themselves as anti-BJP and on the other hand, TMC Govt is continuously suppressing all activities against Modi Govt. pic.twitter.com/NY1UkTuUqK

The image was shared on Facebook in a now deleted post, with a similar narrative. The user has since then issued a clarification for sharing an unrelated image.

BOOM ran a reverse image search and found that the photo is originally from Delhi's Mukherjee Nagar area, where a scuffle broke out between a commercial vehicle driver and cops of Delhi after the latter grazed past a police van. The cops reportedly thrashed the driver and his son, who had threatened them with a sword.

The incident was followed by members of the Sikh community protesting outside the Mukherjee Nagar police station against alleged excesses.

The image of the injury was also published in a news report by Daily Post and DailySikh.

Screenshot of the report published by Daily Post on June 2019.

The same image was a tweeted by Ankit Lal, the social media strategist of Aam Aadmi Party.

These injury marks on the body of Gramin Seva driver beaten by @DelhiPolice clearly show how the lawmakers broke laws in broad daylight in the National capital.@JarnailSinghAAP visited the victims in hospital and also went to Mukherjee Nagar P.S. to talk to the police officers. pic.twitter.com/GNcn1ZLqP5

An excerpt from the Hindustan Times reads, "The police said the driver and his juvenile associates, both from the Sikh community started arguing with a PCR personnel on the spot. They added that the argument escalated, the man drew a sword and the personnel asked for backup. According to the police, the man then tried to attack the dozen or so policemen who came out to back up their colleague with his colleague, while his associate allegedly attempted to flee in the Gramin Sewa vehicle and, in the process, ran the vehicle over a policeman's leg. He was later detained by the police. One of the policemen suffered a deep cut in the head after being allegedly attacked with the sword."

Delhi Police issued a statement later saying, "The alleged incident followed an accident caused by a Gramin Sewa tempo to a police vehicle. Thereafter, a police officer was also assaulted on the head by the tempo driver with a sword. Further, the tempo was driven dangerously and caused injuries to a policeman in the leg."

The video of the incident which documented cops thrashing the Sikh driver was also viral.

A report of the incident by NDTV can be seen below.