An old photoshopped caricature taking a swipe at Prime Minister Narendra Modi has been revived with the same false claim that it was created by Ben Garrison, an American conservative cartoonist.

BOOM found that the cartoon, which has been online since 2017, has been created by photoshopping two separate political cartoons made by Ben Garrison and Indian cartoonist Satish Acharya.

The cartoon titled 'Lipstick on a pig,' showcases a mother pig, whoU has a caricatured face of Prime Minister Modi, has several piglets, with logos of several news outlets feeding from it. In the background, there is what seems to be a crazed dog, that has the name 'Bhagwat,' to depict Rashtriya Swayamsevak Sangh chief Mohan Bhagwat, hanging on top of it.

The phrase 'lipstick on a pig' is used to describe cosmetic or superfluous changes that do not change an unpleasant fact.

Social media users are sharing it with a context that the Indian media narrative is controlled by Modi.

A user shared it with a caption, 'American Cartoonist Ben Garrison Sees Indian PM Modi like lipstick on a pig and India's media sucking up to him, (sic)'.
An archive of the post is available here.

Users were sharing it with the claim that, 'Now even American cartoonists are confirming that the media in India is fed by Modi.' An archive of the post is available here.

A Chinese user had tweeted it giving it the angle of the Galwan valley face-off between India and China. An archive of the tweet is available here.

MK Venu, the founding editor of the publication The Wire, also tweeted it. MK Venu contacted BOOM and said that he deleted the tweet when it was brought to his notice that the image is photoshopped. An archive of the tweet is available here. 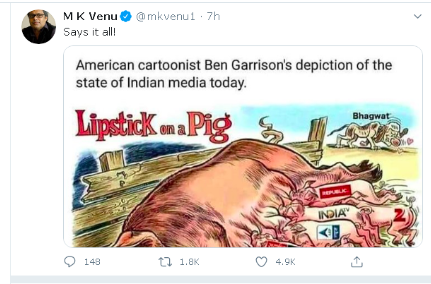 Reverse image search on the image led us to the original cartoon by Ben Harrison, published on March 8, 2016. Titled 'Lipstick on a pig,' the satirical cartoon showed Hillary Clinton as a mother pig, and pigs that were labelled 'fraud,' 'crony capitalism,' 'lobbyists' and 'lies,' feeding off her, to show a metaphorical meaning. The cartoon was made at the time when Hillary Clinton was contesting in the US Presidential Elections.

Garrison also put up a blogpost on the same cartoon, titled, 'Lipstick on a Pig, New Ben Garrison Cartoon.' A look into the 'About Me' section of the cartoonist's website shows that Garrison is has been a supporter of Trump before he was elected, and is one of the few political cartoonists who depicts Trump in a positive light.

BOOM reached out to Garrison, who confirmed that the cartoon was not created by him. "My work is often vandalized and changed by anonymous trolls and that's the case here," he said. 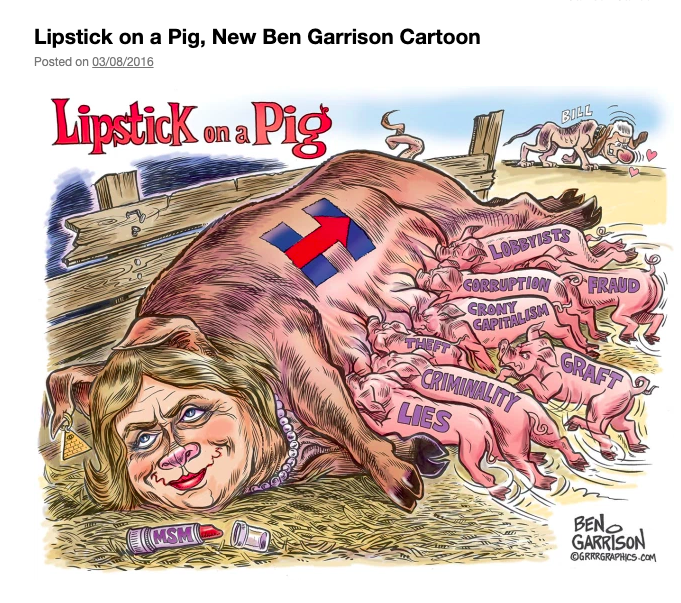 A search with the keywords Ben Garrison and Modi shows that the version where Modi has been photoshopped is not a new image and it has existed since 2017. Cartoonist Satish Acharya clarified that the image of Modi had been photoshopped from his 2010 caricature of then Gujarat CM Narendra Modi on his 60th birthday. BOOM reached out to Acharya, who told us that, "Someone took the face of Modi from my caricature to use it on Garrison's cartoon."

As for who the question of who had morphed the image, Acharya says that "it is difficult to trace the source of modifications done to cartoons. Cartoons go viral regularly and once it's on the web, we cartoonists lose control over it."

This is not the first time Ben Garrison's signature has been morphed on a cartoon satire on Indian politics though. BOOM had fact-checked a viral cartoon in March 2019 which was morphed and falsely credited to Ben Garrison. Since the morphed image had been on the internet since a while, Garrison had issued a clarification in 2017 that the cartoon had been falsely credited to him.

Claim :   American cartoonist comments on Modi and Indian media
Claimed By :  Social Media Posts
Fact Check :  False
fake news FAKE NEWS FactCheck Morphed Image Photoshopped Image cartoon political satire political cartoon bjp Narendra Modi Indian Media RSS MOHAN BHAGWAT Lipstick on a pig Satish Acharya piglets indian media American cartoonist pig cartoon
If you value our work, we have an ask: Our journalists work with TruthSeekers like you to publish fact-checks, explainers, ground reports and media literacy content. Much of this work involves using investigative methods and forensic tools. Our work is resource-intensive, and we rely on our readers to fund our work. Support us so we can continue our work of decluttering the information landscape. BECOME A MEMBER
📧 Subscribe to our newsletter here. 📣You can also follow us on Twitter, Facebook, Instagram, Youtube, Linkedin and Google News 📝Stay updated with all our latest fact check stories.