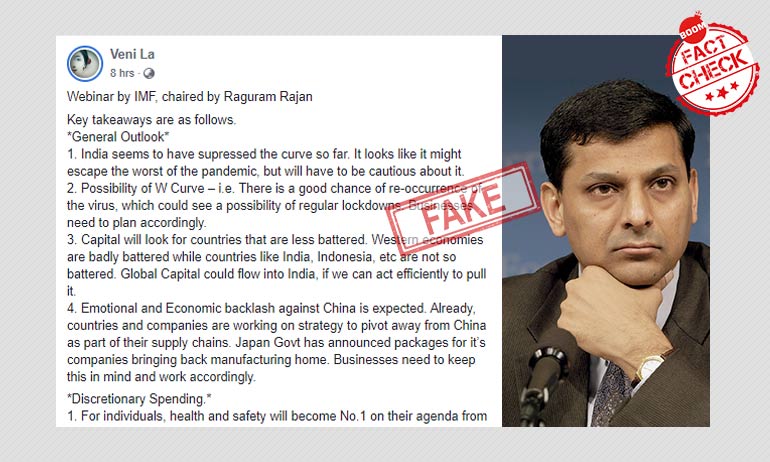 Former Reserve Bank Of India (RBI) governor Raghuram Rajan dismissed a viral post circulating on social media that falsely claimed to list the key takeaways from a webinar addressed by him. The social media message claimed that Rajan chaired a meeting organised by the International Monetary Fund (IMF), where he said that India might escape the worst of the Coronavirus pandemic and suggested steps that could be taken to plan for businesses accordingly.

The viral message was also picked up by Business news website Business World, attributing the quotes to Rajan.

Read on to know the key takeaways from the #webinar by the #IMF chaired #RaghuramRanjan.#business #finance #Covid_19india https://t.co/eeYjdUNGNu

Webinar by IMF, Chaired by Raghuram Rajan, this morning. Key takeaways are as follows:*
*General Outlook*
1.India seems to have supressed the curve so far. It looks like it might escape the worst of the pandemic, but will have to be cautious about it.

BOOM found that no IMF webinar was chaired by Raghuram Rajan and the points being attributed were not stated by him as being claimed. Rajan in a Linkedin post dismissed the quotes saying, "I have not participated in any such webinar."

We searched with the keywords from the viral message and found that the webinar and the key points were also being attributed to Darshan Mehta, CEO of Reliance Brands Limited.

BOOM contacted Darshan Mehta, who confirmed that he had addressed a webinar in the first week of April 2020 organised by Jain International Trade Organization (JITO). "I had addressed a webinar by JITO two Sundays back, but there was no recording or transcription of the webinar. Someone seems to have written down some points and made it viral."

Mehta confirmed to BOOM the first part of the viral post. However, he did not confirm all the points made in the long viral message. BOOM could not independently verify if all the points were made by Mehta during his webinar

Additionally, we did not find any update on the IMF website regarding a webinar chaired by Rajan. BOOM had also reached out to Rajan and IMF via email for a response before the former governor issued a clarification.

The post is viral in the backdrop of the lockdown imposed to tackle the Coronavirus outbreak and the potential impact of it on the economy. Follow BOOM's LIVE blog for recent updates: Coronavirus LIVE Update: India Reports 18985 Cases, 603 Deaths