A compilation of clips of Chinese President Xi Jinping visiting the Northwest region Ningxia Hui in 2016 is viral with bizarre claims that the former made a trip to Muslim majority areas to understand why COVID-19 virus has not affected them.

The 3 minute 30 second long video has been mischievously edited, with a narration in Bengali that states that the Chinese president dropped in at multiple Muslim houses to adapt their lifestyle in a bid to combat the spread of COVID-19. COVID-19 has claimed 3305 lives worldwide so far. Thirty cases have been reported from India.

The narrator of the video states in Bengali how Xi Jinping has been impressed by the Muslim ways of living, as footage of him walking around in the northwest region of China plays. The narrator can be heard saying, "At a time entire China is affected by Coronavirus, Muslims are leading a fit life, devoid of any infections. Nobody has been affected by the aforementioned virus yet. To put an end to speculation why Muslims are safe and why they have not been infected by the virus, president Xi Jinping visited Muslim households on foot to see what they eat, and what habits they practise. He has held a few meetings with Muslim representatives to know what they eat, and what they do. He has been surprised after knowing the same. He has also gone around and observed the halal practises of Muslims, and found their way of eating healthier than others."

The narrator then puts words in Jinping's mouth, and claims that the latter was quoted as asking residents how they cut and eat their meat. He then states how Jinping visited the area the next day and observed the Muslim way of eating non-vegetarian food. In the later half, where Jinping interacts with Muslims, the narrator claims that he was praising their halaal eating habits. 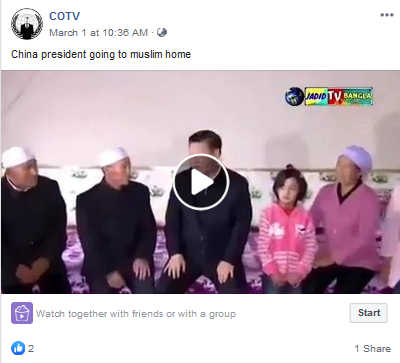 The edited footage can be viewed below.

BOOM received the video on its helpline number for verification as well. 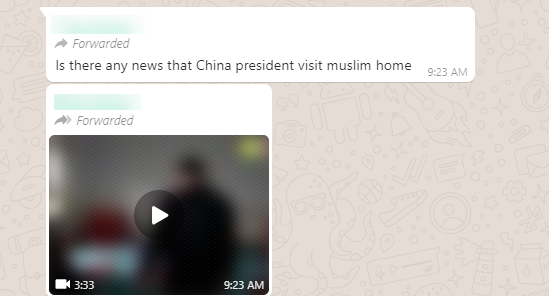 BOOM observed a logo of, JADIDTVBANGLA on the right corner of the video. The same video was uploaded to YouTube by the channel on February 20, 2020.

The video is headlined in Bengali as, "Now China will follow Islam, inshallah. Watch how China's president is going to Muslim houses to seek suggestions."

BOOM found that the viral video is a combination of footage of Jinping's visit to Ningxia province. In July, 2016 China's president visited the autonomous Northwest region Ningxia Hui and stressed on poverty alleviation efforts by protecting religious harmony and environment.

Upon relevant keyword searches, we found that the first part (from 0:12 to 0:26) of the footage was from a video uploaded on July 21, 2016 to YouTube, by China's Global Television Network or CGTN, a national broadcaster. The video documents Jinping's visit to China's northwestern region. It has been described as, "President Xi Jinping urges inclusive development on Ningxia tour."

The second part of the footage (from 0:16 to 0:50) where the president can be seen interacting with representatives of the Muslim community, was uploaded to YouTube on July 21, 2016. President was visiting the Xinxheng Mosque in Yinchuan City in Ningxia Hui region.

The third part of the footage (1:27 onwards) where the president interacts with farmers and vegetable growers of the Muslim community was uploaded to YouTube on 20 July 2016.

BOOM has earlier fact-checked claims about Jinping visiting mosques to offer prayers to protect China from the deadly Coronavirus outbreak.

Several videos are viral on social media with claims that people of a certain faith do not get infected by the novel Coronavirus. The fake viral clips show Chinese or Asians allegedly converting to Islam after realising that Muslims were not being affected with the virus. The same narrative has been debunked by multiple fact-checkers worldwide.