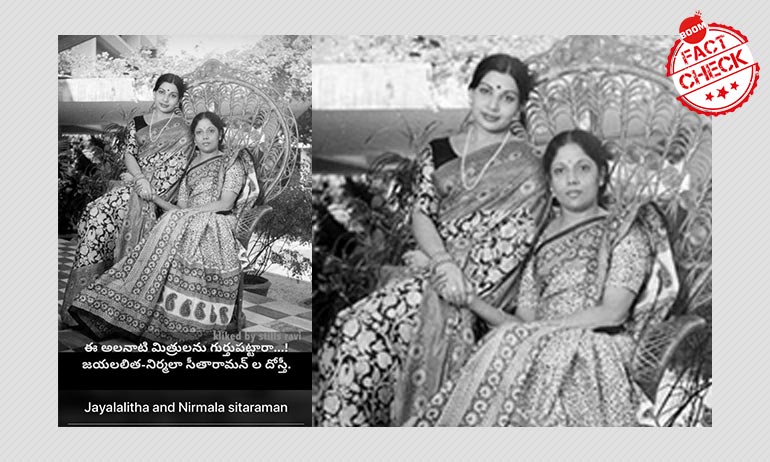 A black and white photo of two women sitting together is being shared with the claim that it shows late Tamil Nadu Chief Minister J Jayalalitha and current Finance Minister Nirmala Sitharaman.

Since Jayalalitha and Nirmala Sitharaman both hail from Tamil Nadu, the image is being circulated with the speculation that the two knew each other long before they pursued politics.

Many such Facebook posts can be found. The text on the photo, when translated from Tamil, reads, 'A Maharani who shook India..A Maharani who is shaking India..Who is beautiful..' with the claim it is a photo of Jayalalitha and Nirmala Sitharaman.

Jayalalitha and Nirmala sitaraman in the same frame. pic.twitter.com/eHPhDTJWWV

Lots of Twitter users had put up posts with similar claims.

BOOM looked for the photographer mentioned on the photo which was mentioned at the bottom right of the page, Stills Ravi, and found out he had issued a clarification about the photo on his page that the image is of Jayalalitha and the famous Tamil writer Sivasankari.
The photographer, Ravi Verma V, who goes by the name Still Ravi professionally, also confirmed with BOOM that it was a photo of Jayalalitha and Sivasankari that he had taken for a Tamil magazine.

Sivasankari is a popular Tamil writer whose work spans more than 4 decades, and some of her notable works include a biography of biographies of Indira Gandhi, and Sri. G.D. Naidu. A search on Google reveals that Jayalalitha and Sivasankari were friends. An article in DT Next, a local news website, which talks about an episode from Thanthi TV's Jayalalitha Enum Naan documentary has a few snippets illustrating Jayalalitha's friendship with Sivasankari.

An old photograph of Nirmala Sitharaman from AsiaNet News clearly indicates that she is not the woman in the viral photograph.