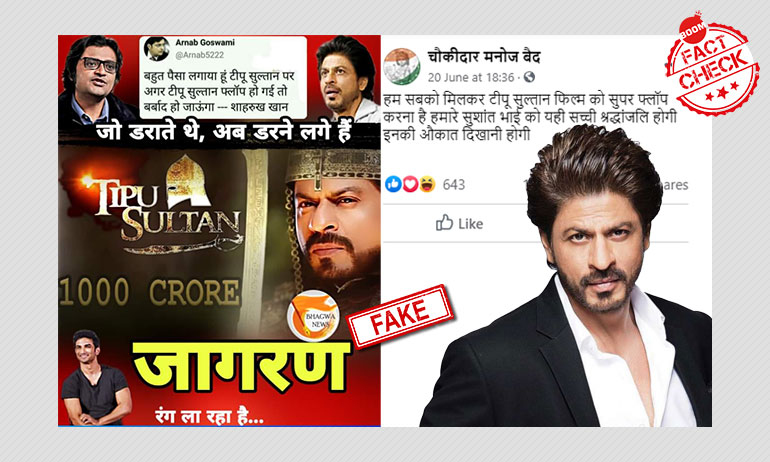 A debunked fake photo claiming to show Shah Rukh Khan will star in the role of Tipu Sultan has been revived on Facebook following the death of actor of Sushant Singh Rajput and a raging debate on nepotism in the Indian film industry.

BOOM debunked the same claim in May this year after photos showing Khan in ancient armour went viral with calls to boycott the 'film'. We found that were was no unreleased film in the works about Tipu Sultan that starred Shah Rukh Khan and that the 'poster' was created as fan art.

The misleading image is being shared on Facebook with a caption that translates, "we all have to make Tipu Sultan a super flop movie. This is the true tribute to our brother Sushant. We will have to show them their position." (Translated from Hindi: हम सबको मिलकर टीपू सुल्तान फिल्म को सुपर फ्लॉप करना है हमारे सुशांत भाई को यही सच्ची श्रद्धांजलि होगी इनकी औकात दिखानी होगी )

Actor Sushant Singh Rajput was found dead in his apartment in Bandra, Mumbai on June 14, 2020. The Mumbai police have prima facie ruled the death as a case of suicide.


The viral photo also includes a tweet from a Twitter handle @Arnab5222. The handle is a fake account with over one lakh followers, impersonating Republic TV's Editor-in-Chief Arnab Goswami. The quote attributed to Shah Rukh Khan about investing a lot of money in the film 'Tipu Sultan' and going bankrupt if it flops, is also fake.

The misleading image has been shared over 9,600 times on Facebook.

The photo is viral on Twitter with similar fake claims.

BOOM found that the image was created by a fan and does not represent a commonly released film poster, as it has no credits and cast mentioned. The original poster was uploaded to YouTube as a thumbnail to a fan-made trailer. The trailer, titled 'Tipu Sultan Trailer Shah Rukh Khan New movie', was uploaded to YouTube in September, 2018. The footage, which was made compiling shots from historical films, features the morphed images of Khan wearing head gears. A disclaimer at the beginning of the trailer rules out any speculation of Khan playing Tipu Sultan on screen.

The video was uploaded on September 20, 2020, on the platform and had a disclaimer, "this is a fanmade trailer for entertainment purpose only" written on the opening frame of the video.