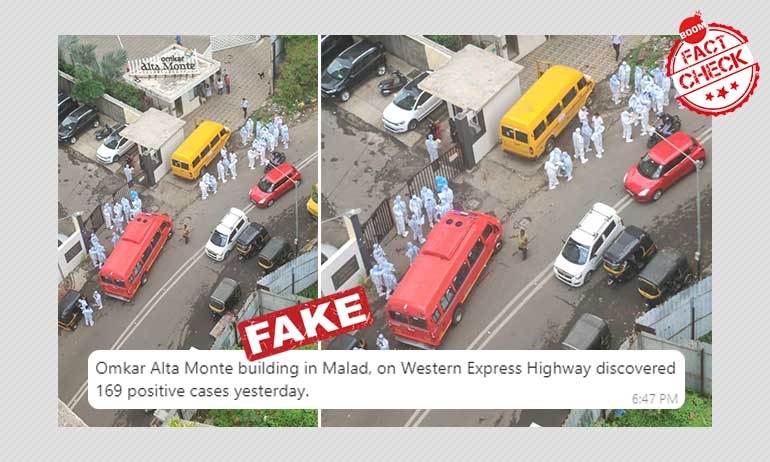 A viral message claiming 169 patients have tested positive in a residential Complex in Malad, Mumbai is false. The message is doing the rounds on WhatsApp and shows a group of people standing outside the building wearing protective gear.

BOOM reached out to officials at the Brihanmumbai Municipal Corporation (BMC), Mumbai's civic body who rejected the claim and said that the photo shows health officials visiting the building for a routine screening camp.

We received the message on our helpline asking if 169 people had tested positive for COVID-19 in the building.

Mumbai has reported over 70,000 coronavirus positive cases with 4,463 recorded deaths. The number of active cases in Mumbai stands at 28,749 with 43,545 patients having recovered. The rising cases has led the government to extend the lockdown in Maharashtra till July 31.

BOOM reached out to BMC's Sanjog Kabare, Assistant Municipal Commissioner, P North Ward who dispelled these rumours and called it routine check. "We are carrying out house to house surveys in SRA buildings just the way we did it in slums. On June 27, we conducted a house to house check in this building," he said. He further dismissed the message and said, "the news that 169 people tested positive in this building is fake."

We also found tweets from residents of Alta Monte from June 27, praising BMC for the screening. A user Leeya Mitra De, resident of Alta Monte apartments, had on June 27, tweeted a photo of health officials wearing PPE kits.

Thanks to @mybmcWardPN @mybmc for conducting the screening in our society at Omkar Alta Monte,Malad east. Kudos to the govt to be so proactive with the pandemic @AUThackeray @CMOMaharashtra pic.twitter.com/UgRmF4VeIR

Following the viral fake message, some residents of Alta Monte, took to social media to rubbish the rumours.

Hi this is a fake news. I stay in Omkar Altamonte. This was a proactive chk which BMC did last Saturday.

The official Twitter account of BMC, also tweeted calling the message fake and asking people to not panic.

This image from Omkar Alta Monte, Malad (E) making rounds on social media claims that 169 residents have tested positive for COVID19. We would like to inform that the said news is false. The image is of a screening camp organised at the premises. We urge citizens to not panic. pic.twitter.com/528OH2uRmb