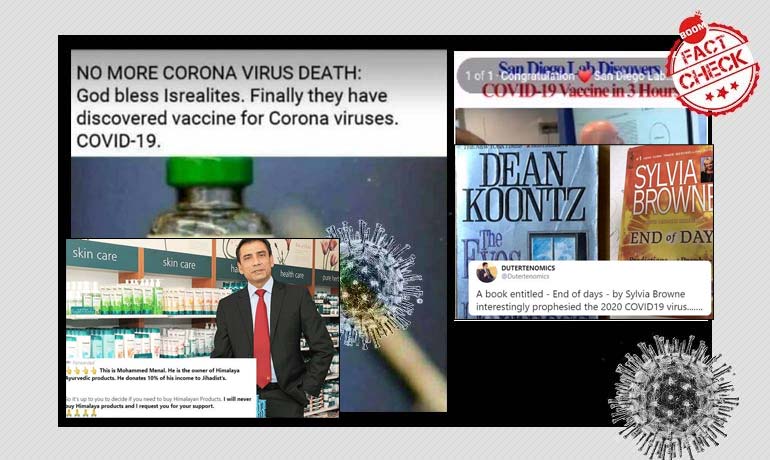 1. Did These Books Predict The Coronavirus Outbreak?

In the past few weeks, social media has been rife with claims that the recent COVID-19 outbreak was predicted by two different books – The Eyes of Darkness (1981) by Dean Koontz and End Of Days (2008) by Sylvia Browne. These claims were made using screenshots, that highlighted excerpts from the books where similar outbreaks are being discussed. BOOM found that these predictions are not entirely precise, and made on the basis of educated guesses using observations on other similar contagious diseases such as the SARS coronavirus.

An image of Philipe Haydon, CEO of Himalaya Drug Company went viral with false claims that he is the owner of the company and donates 10 per cent of his annual income to fund terrorism against India. The posts further misidentified Haydon as Mohammed Menal, the founder of the company, and called for boycott of the Himalaya products. Himalaya Drug Company took to Twitter to rubbish the false claims in an official statement.

3. Viral Posts Claiming Vaccines For Coronavirus Have Been Developed Are False

A recent spate of posts on social media made the claim that Israel and the United States have already developed vaccines to fight the ongoing COVID-19 pandemic. However, the World Health Organisation (WHO) stated that there is no vaccine for the virus yet and a new vaccine could take around 18 months to be publicly available.

Two old and unrelated videos of individuals shouting "Jai Shree Ram" went viral on social media with false claims that they show these individuals preventing anti-Citizenship Amendment Act sit down protests, similar to the one in Delhi's Shaheen Bagh. The videos have been spliced together and shared with a caption in Hindi which reads 'Hindu brother prevented another Shaheen Bagh from coming up. Hail Modi'. BOOM traced both the videos back to April 2018 and July 2015, long before the protests against CAA began.

Two graphics claiming Hindi news channel Aaj Tak reported drinking tulsi and noni juice as preventive measures for the COVID-19 coronavirus is going viral on social media. These claims are false; BOOM found that these graphics have been doctored with multiple discrepancies in the fonts, timestamp, ticker of the viral screenshots as compared to those used by the channel.

Furthermore, the World Health Organisation has made no mention of tulsi or noni juice in fighting the virus.