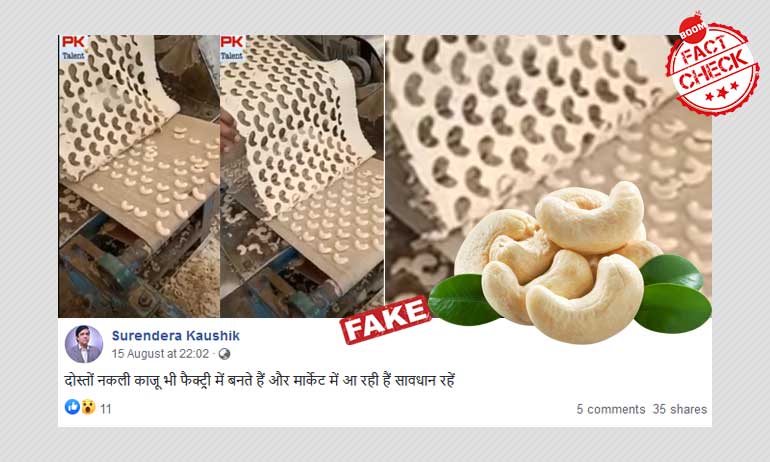 An edited video of the production of cashew-shaped biscuits is doing the rounds on social media with false claims that it shows how artificial cashew nuts are produced with the help of Chinese made machines and thus should be avoided. The video has been overlaid with a voiceover which states that a particular kind of machine produces these chemically laden adulterated cashew nuts which are harmful for the health.

The 42 second long video shows unbaked cashew-shaped biscuits being separated from a sheet of rolled dough with the help of stencils.

The viral video is circulating on Facebook with the caption: ''Friends, fake cashews are also made in the factory and they are coming in the market. Be careful.'' (Original caption in Hindi: ''दोस्तों नकली काजू भी फैक्ट्री में बनते हैं और मार्केट में आ रही हैं सावधान रहें'') 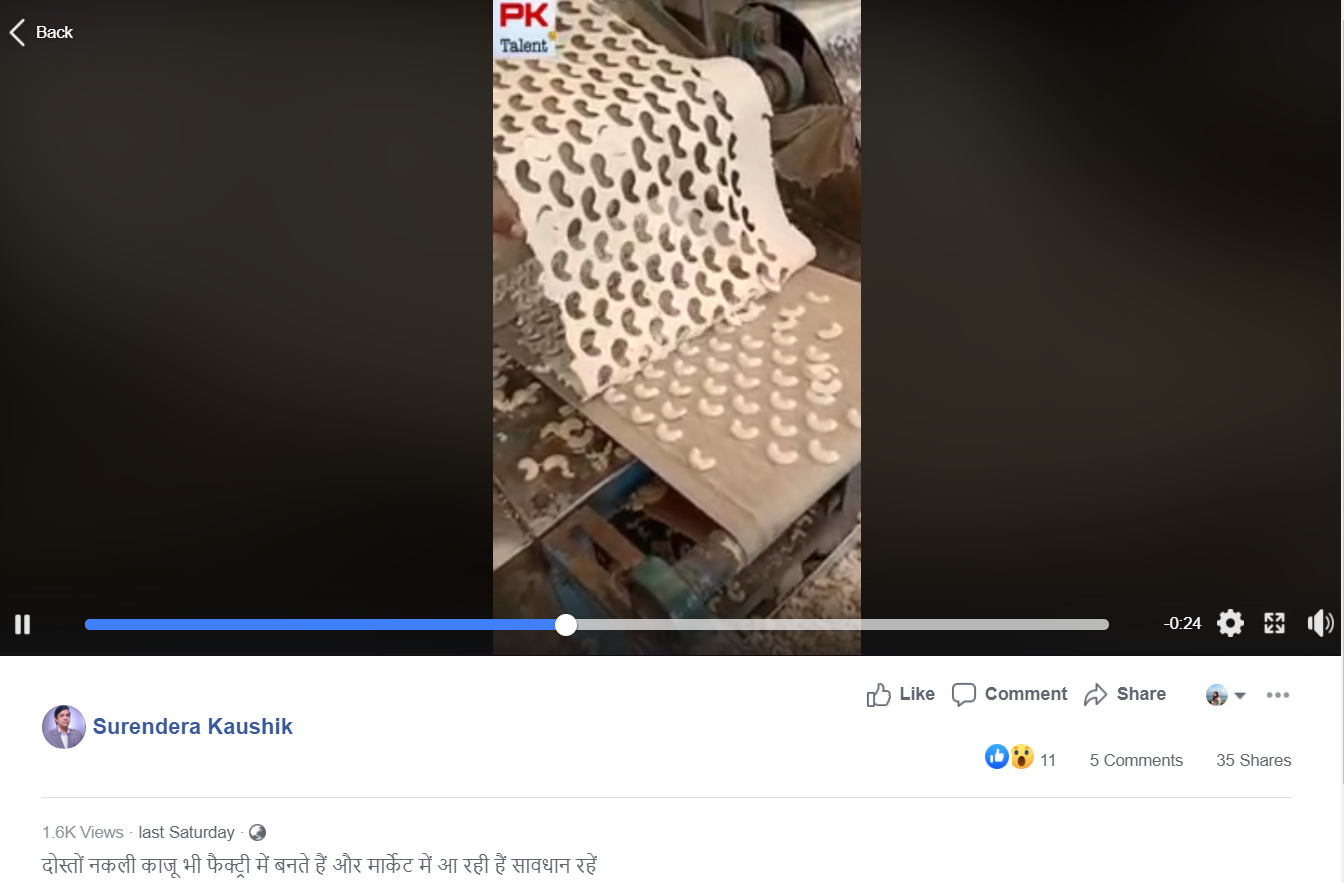 The video is also viral on Facebook with claims that it shows artificial cashews being made out of tamarind seeds and widely used in local hotels. 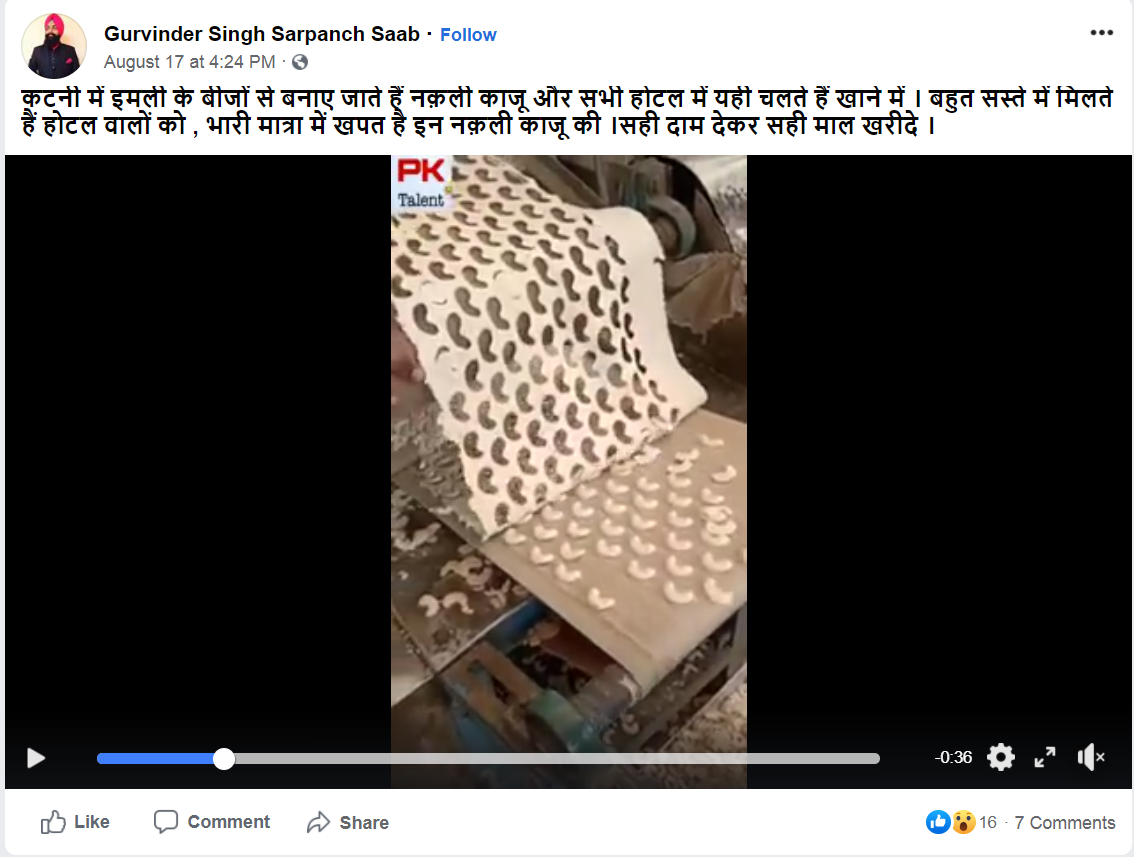 The video is doing the rounds on Twitter with a similar narrative in Hindi. The archived version of the tweet can be seen here.

A friend of mine sent this video to have it posted. Now we have one more added problem, please check the cashews before buying. Lesson: nothing to be taken for granted. pic.twitter.com/3F9i7McA4t

We also received the video in our tipline number with the claim that a chemical cashew making machine manufactured in China is being widely used in India. 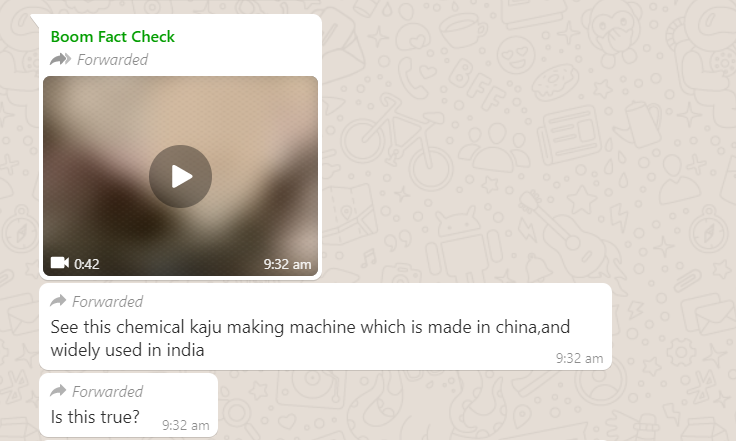 Several netizens pointed out that the video is of a 'kaju nimki' producing machine. The Kaju Nimki is a popular Indian bite sized biscuit, available in the shape of a cashew nut.

dont spread panik with wrong videos sir. This is called Kaju Nimki Machine which makes kaju shaped sweets.....see youtube video and if you want you can buy from manufacturer of machine. this is not artificial cashew....https://t.co/bepPt1UIdS

Taking cue, BOOM ran a keyword search on Youtube with 'kaju nimki machine' and found several videos which show cashew-shaped biscuits made using the same process as shown in the viral video.

We found one Tushar Pandya, a Mumbai-based enterprenuer who owns several of these snack producing machines. Pandya identifies himself as a manufacturer of food processing machinery on Twitter. His account has other such videos of manufacturing food products with similar machines.

In a telephonic conversation with BOOM, Pandya said, "The video is fake and you cannot make cashews in machines artificially. It clearly shows kaju nimki biscuits made out of flour.'' He identified the machine showed in the video as an automatic 'kaju nimki' making machine similar to the one used in his factory. He also added, ''You mix water and flour and blend the dough into that shape, to cut out cashew nut shaped biscuits. They are then baked or roasted.''

BOOM found similar videos on Youtube of cashew and other shaped snacks being manufactured with such automatic snack-making machines.

BOOM however could not independently verify the origin of the video.