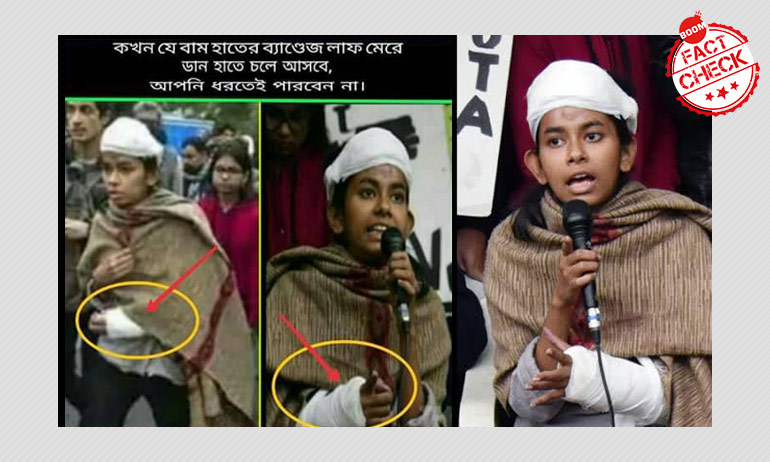 A set of two images purported to show that Jawaharlal Nehru University (JNU) Students' Union president Aishe Ghosh was faking a hand injury, is false. BOOM found that one of the images had been flipped to falsely claim that Ghosh was photographed with different hands being bandaged on two different occasions.

JNU students came under an attack by a mob of masked men and women on January 5 evening. Several students, teachers and staff of the varsity were injured as the unidentified mob went about ransacking the premises and beating them.

Netizens have also called out Ghosh, for "such an error." One such post has been captioned as, "To err is to human. You all blame her for no reason."
ALSO READ: JNU Violence: With WhatsApp, Planning An Assault Was Never This Easy
The same set of images is viral on Twitter, with a similar narrative.

#LeftBehindJNUViolence
Aishe Gosh is bigger actor then our Bollywood diva

Another comedy of error by the left thugs

Plaster/Bandage with a sling is shifting arms faster than the Main Stream Media can come with sham-confession tapes. pic.twitter.com/NW7ReZTlsB

Swarajya columnist Shefali Vaidya tweeted the same mirror image of Aishe Ghosh, along with another, where she can be seen wearing a bandage on her left forearm. Vaidya took a dig at filmmaker Anurag Kashyap for not 'coaching students on continuity.'

Alhamleninallah! It is a miracle. Aishee Ghosh's broken hand got healed in a day and got broken again! @anuragkashyap72 couldn't you coach these dingbats in continuity? pic.twitter.com/oVbgftyLCM

Kashyap in turn hit back with a mirrored image of Vaidya.

BOOM was able to ascertain that one of the images in the collage had been flipped in a 180 degree angle and is a mirror image of the original. We were able to find the original image, where Ghosh can be seen addressing students, a day after the attack. The image was clicked by photojournalist Vipin Kumar, of Hindustan Times for Getty Images.

Below is a comparison of both the images, which shows that they are the same. The text in the background has been inverted in the flipped photograph.

BOOM also found a Facebook Live video from January 6, when Ghosh was addressing the varsity students. At 0.28 second mark onward, Ghosh can be seen speaking with a left arm injury.