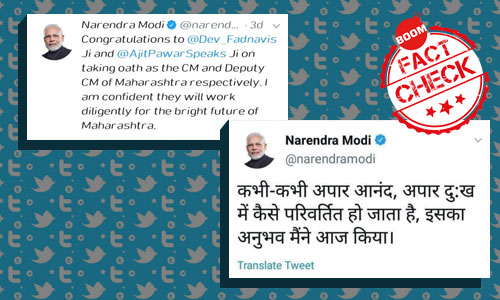 A three year old tweet of Prime Minister Narendra Modi after the passing away of his old associate and senior Rashtriya Swayamsevak Sangh (RSS) leader Prafulbhai Doshi, is being falsely shared as his first reaction after the resignation of former Maharashtra Chief Minister Devendra Fadnavis on November 27, 2019.

A collage with screenshots of two tweets by the prime minister is being shared on Facebook with the caption, "Prime Minister Modi's first reaction after the resignation of Chief Minister Fadnavis". (In Hindi - "मुख्यमंत्री फडणवीस के इस्तीफे के बाद प्रधानमंत्री मोदी की पहली प्रतिक्रिया")

We searched for the second tweet attributed to PM Modi on Twitter using Twitter keyword search and the initial words from the viral tweet, - (from:narendramodi 'कभी-कभी अपार आनंद"). The result showed that he had tweeted it on July 13, 2016, and not recently as being claimed in the viral post.

PM Modi had tweeted this after the death of his old associate and senior RSS leader Prafulbhai Doshi, who he had a meeting with on the same day in the morning reported Press Trust of India on July 14, 2016.

"We met at 5' o clock in the evening and after sometime I heard that the meeting was the last one with him," Modi had also tweeted.

Fadnavis and Nationalist Congress Party (NCP) leader Ajit Pawar, had taken oath on November 23, 2019 as the CM and deputy CM in a quiet ceremony in the early hours of Saturday, but latter had to resign on November 26, 2019, as the BJP did not have the numbers to form the government.

Congratulations to @Dev_Fadnavis Ji and @AjitPawarSpeaks Ji on taking oath as the CM and Deputy CM of Maharashtra respectively. I am confident they will work diligently for the bright future of Maharashtra.

The first tweet in the collage by PM Modi was after Fadnavis and Ajit Pawar had taken oath, after which he tweeted congratulated them. But after the resignation of Fadnavis, we did not find any tweet by the prime minister.