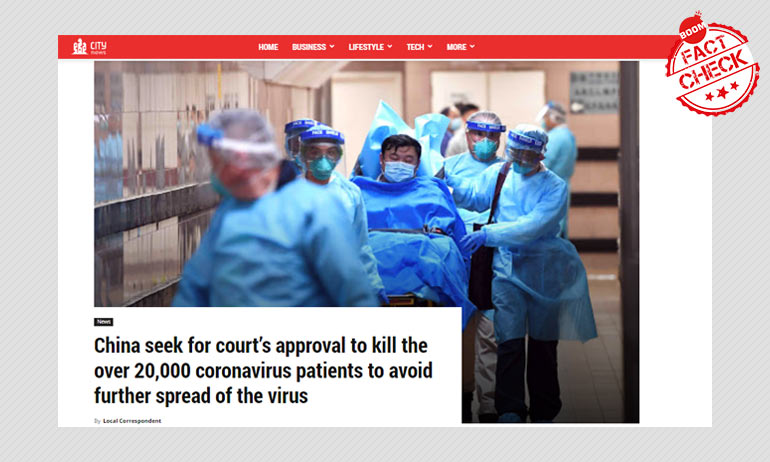 An article claiming China sought court approval to kill over 20,000 patients who were infected by the deadly novel Coronavirus, is false and originates from a dubious website that has a history of peddling misinformation.

The article by the website AB-TC ,also known as City News, claimed that China's highest court was expected to give a nod on Friday for the mass killing of Coronavirus patients in the country to halt the spread of the virus.

The website, which did not cite a single official Chinese source, claimed China had mentioned in a document that it may 'lose its entire citizens if the few affected patients do not sacrifice their lives to save health workers and a billion others.'

BOOM received the message on its WhatsApp helpline from readers asking if the article was true.

The story was also viral on other social media. (Click here)

The story flew around the Internet as the death toll from the virus climbed past 600 on Friday and amid growing speculation that China was not being open about the scale of casualties.

However, we could not find a single reliable news website that corroborated AB-TC's claim. The claim appears to have originated on the website.

﻿The website AB-TC (City News) has no details on the site mentioning who is behind the website. The articles on the website do not have authors and are claimed to be written by 'Local Correspondents'.

Although the site is registered in Guangdong, its content is in English and is US-centric aimed at readers in the United States.

The site also has other telltales signs of being a fake site with a stack of click-bait links.

We also ran a key word search ("ab-tc.com" AND "hoax" OR "fake" OR "fact-check") to see if the website was fact-checked earlier and found stories from US fact-checking website Snopes and Lead Stories.

Snopes, which also debunked the same claim said, there was no mention of this supposed court case on the The Supreme People's Court of the People's Republic of China website.

Fact-checker Lead Stories has even detailed a list of its stories that feature ab-tc.com.

Coronavirus: Battling a pandemic and misinformation

The first case of the virus was reported by China to the WHO in December, 2019. China claims that this virus emerged from a seafood market in Wuhan but the exact source of the virus has not yet been identified.The World Health Organization declared the 2019-nCoV as a public health emergency of international concern (PHEIC) on January 30, 2020.

BOOM has actively debunked misinformation ranging from various methods of prevention and treatment of the virus, unrelated images linked to the outbreak, misrepresented sources of the Coronavirus, to the Chinese prime minister and president being dragged into the circulation of fake news.