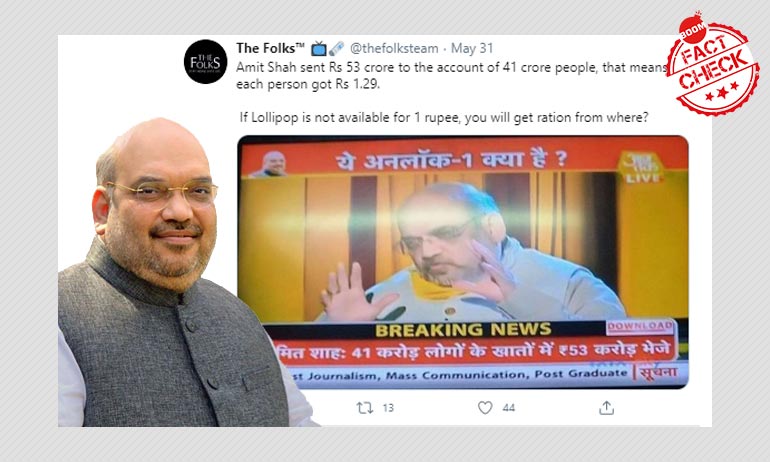 A viral screenshot of Aaj Tak's ticker claiming Amit Shah said 41 crore people have received ₹53 crores in their bank accounts, is incorrect as the channel misquoted the home minister and later admitted it had erred.

In the viral photo, a screen grab from Shah's interview to AajTak's Executive Editor Anjana Om Kashyap shows Shah in the frame and a news ticker in Hindi, which translates to, ''Breaking News. Amit Shah: In the accounts of 41 crore people,₹53 crore has been transferred"

The screenshot went viral on Twitter with netizens pointing out that if one were to calculate the amount transferred to each account then each person would have only received ₹1.29 in their accounts.

Amit Shah sent Rs 53 crore to the account of 41 crore people, that means each person got Rs 1.29.

If Lollipop is not available for 1 rupee, you will get ration from where? pic.twitter.com/ncKAKP0U9L

Each one these got Rs1.29 pic.twitter.com/Q2ZCRF32yF

We searched with the same caption and found that the screenshot of the ticker misquoting Amit Shah was viral on Facebook too.

BOOM checked the interview and found that Home Minister Amit Shah said ₹53,000 crores and not ₹53 crores, which was incorrectly attributed to him in the news ticker.

The interview was held in the backdrop of Prime Minister Narendra Modi's government completing a year in office into his second term and also about the ongoing COVID-19 pandemic. (Read more)

During the interview, Anjana Om Kashyap, Executive Editor of AajTak, asks Shah a question on states raising the issue of not receiving adequate funds during the COVID-19 crisis, to which Shah cites the figure of ₹53,000 crores being transferred directly to 41 crore people in their bank accounts from every state in the country.

Anjana Om Kashyap: West Bengal government, Mamata Banerjee, who said we are not receiving help, now Shramik Special train, we'll have a separate discussion on that, but they have continuously said that how much relief should have got, the money sates should have got, Punjab government has also complained, or the Maharashtra government, these differences that have come up, what would you say about that?

Amit Shah: I don't think these are major differences, ₹1,70,000 cores Graib Kalyan Package, and besides that also,₹12,000 crores NDRF fund was sent, from the Finance Ministry also ₹22,000 crore was sent, a lot of assistance has been given, but there are limitations of the central government. I will tell you, a total of 41 crore people have got ₹53,000 crores into their bank account directly. Now, this has gone to all the states, not only BJP states, In Bengal, In Punjab also it has gone, In Maharashtra also it has gone....

In the interview at the 16.37 timestamp, one can clearly hear Shah say ₹53,000 crores and not ₹53 core as stated in the news ticker.