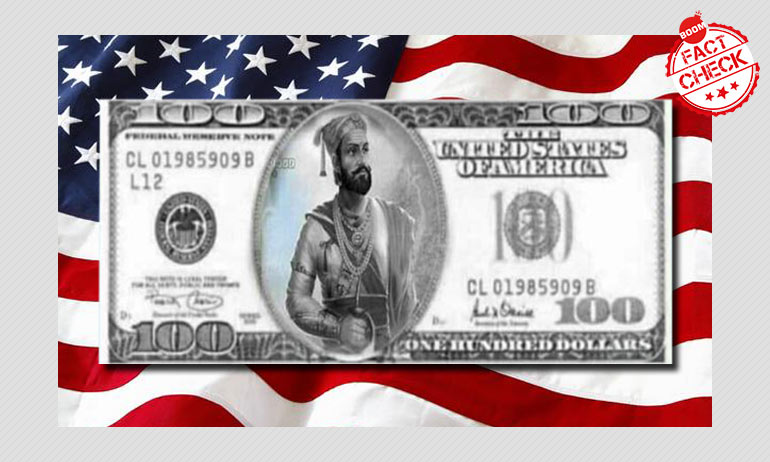 February 19 is listed as the birthday of Shivaji Maharaj by the Maharashtra government and is observed as a holiday commemorating Shivaji's birth, however scholars have disagreed on the date.

The message with the fake bill is accompanied by text in Marathi which translates to the following.

Also Read: New Rs 1000 Note Released By RBI? Not Quite

We searched for coverage on the United States declaring February 19 as 'World Chhatrapati Day' and did not find any news reports that backs the claim in the viral WhatsApp forward.

We searched a list of Commemorative Days observed in the US, and did not find 'World Chhatrapati Day' on it.

On searching for methods to insert faces on a $100 bill, we found that the image of Shivaji Maharaj has been added using the website Pho.to.

On the website, under the money template / US Dollar, one can upload an image with a face that be replaced on the bill which originally has the American founding father Benjamin Franklin on it. (Click here to view the original 100 dollar bill.)

We uploaded a photo of Bollywood actor Shahrukh Khan as an example and found that the numbers on the top left of the bill and the bottom right match with the fake $100 Shivaji bill. Even the signature on both the bills match each other.

We cropped the photo of Shivaji Maharaj used on the fake note and found that it had been mirrored and given a black and white color as the original image can be found online.

This piece of misinformation was earlier debunked by Fact Crescendo. The same fake note has been shared on Facebook since 2018.