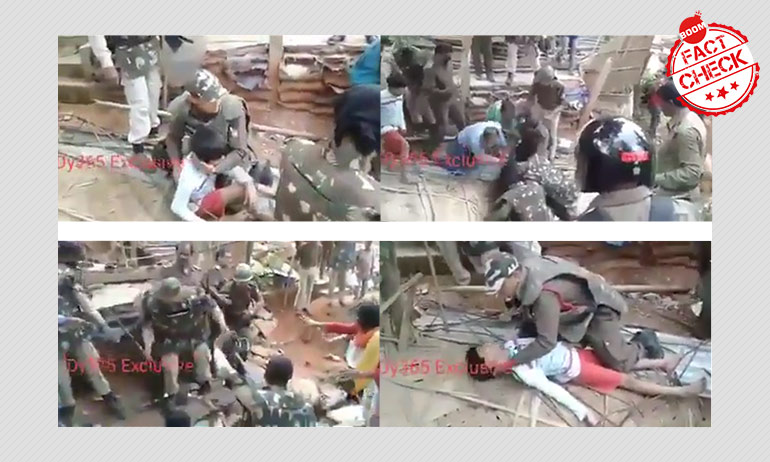 Assam Police Beating Up People Not Included In The NRC

A 2017 video showing a police crackdown during an eviction drive in Assam is being shared with a false claim that it shows police rounding up people whose names are not included in the National Register of Citizens (NRC) in the state.

The video shows police dragging people out from their houses that have been broken. Cries of help can be heard in the background, as armed policemen pull men and women away.

The clip has been revived in the wake of nation-wide protests against the Citizenship Amendment Act (CAA) and the NRC.

The National Register Of Citizens is a government registration document that contains names and relevant information of Indian citizens of Assam. The NRC further seeks to categorise minorities as illegal immigrants, causing many to be worried, after its implementation in Assam.

The viral video has been captioned as: "People are being picked up for not being included in the NRC list. #Assam. If today your protests stop, then tomorrow your fate will be like this." (Original text in Hindi: #NRC में नाम नहीं है इसलिए घर से उठाया जा रहा है #Assam; आज आपका विरोध बंद हो जाए तो कल आपका हाल ऐसा ही होगा ।)

The clip has been viewed more than 2.1 lakh times at time time of writing this article.

The same video is viral on another Facebook page with a similar narrative. It has garnered more than 2.6 lakh views.

Also Read: School Bus Attacked During Padmaavat Protests Passed Off As Recent
FACT CHECK
BOOM found that the video is originally from a forest eviction drive by Assam police that has resurfaced with the fake narrative. We broke the video in its keyframes and ran a reverse image search on a few of its frames. We were directed to a longer version of the video from YouTube, which was uploaded in May this year.
We were then able to ascertain that the footage is from a news bulletin from a local Assamese news channel DY 365 through the watermark.
The same video is uploaded on DY 365 channel's official Facebook page with the following caption. "As the second day of eviction drive continues at Amchang Wildlife Sanctuary, an appalling incident took place at Kangkan Nagar. An angry protestor identified as Ismail Haque attacked a forest official with a sharp weapon amid the eviction. Security personnel jumped at him immediately and what followed next is..."
Also Read: Did Amitabh Bachchan Criticise Delhi Police For Crackdown On Jamia Students?

The incident happened in the Amchang forest area of Assam in December 2017.

BOOM also reached out to a desk editor from the news channel, who corroborated the events.

An excerpt from The Wire states the following.

"Amchang, situated in the state's Kamrup district, was declared a wildlife sanctuary by the state government in 2004 by putting together the Amchang reserve forest, South Amchang forest reserve and Khanapara reserve forest. The area which has seen the eviction drive for three days in a row was declared an ECZ this past June by an expert committee set up by the Union Ministry of Environment and Forests (MoEF)."