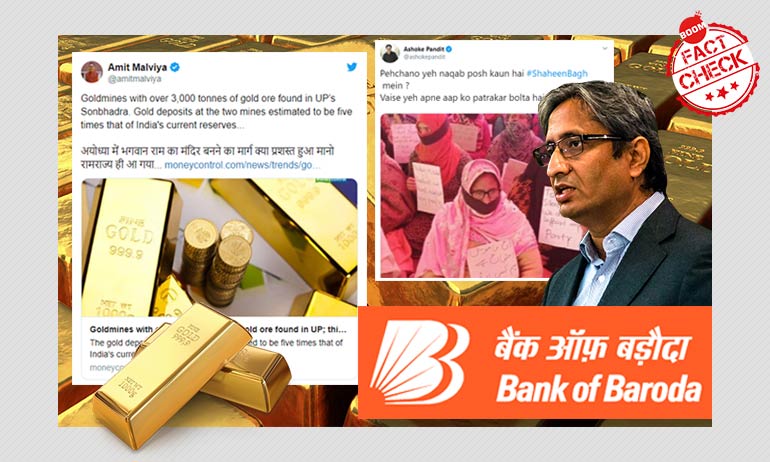 On February 20 major news outlets across the country reported on the discovery of 3350 tonnes of gold deposit, in mines in Uttar Pradesh's Sonbhadra district. According to the news reports, this is five times the amount of India's gold reserve, which is currently at 618 tonnes. However, the Geological Survey of India (GSI) later clarified that the amount of gold that could be extracted from the mines stood at 160 kilos, and not at 3350 tonnes. Read our story here.

Rashtriya Swayamsevak Sangh (RSS) chief Mohan Bhagwat's speech in Ranchi in which he recalled an anecdote of an RSS worker in the UK urging the former to avoid using the word 'nationalism' has been misquoted by a host of prominent Indian news outlets by attributing the statement to Bhagwat. The misreporting was amplified by Asian News International (ANI), who likened the concept of nationalism to Hitler and Nazism, and attributed the statement to Bhagwat, who was, in fact, narrating what an RSS worker in the UK had told him. Read the fact check here.

3. A Yogi who went into meditative state 300 years ago, found alive

A video on WhatsApp is viral with claims that it shows a 300-year old Yogi in a transcendent and meditative state and was found alive in Valliyay, Tamil Nadu, after digging around a temple. However, BOOM found that the video is of a man with an aggravated case of psoriasis from Kazakhstan. Read our debunk here.

An alarmist message, which misinterprets a Calcutta High Court ruling that the Bank of Baroda is under imminent danger of losing its banking licence, is viral on WhatsApp. The HC directed the RBI to consider revoking its licence as one of the many steps that it could take against the bank for it reportedly did not honour a bank guarantee issued by it. Read our story here.

5. Ravish Kumar disguised as a protester in Shaheen Bagh

A photograph of a female protester at Shaheen Bagh is being shared with a false claim that journalist Ravish Kumar disguised himself as a woman to protest. However, Kumar, in a post, clarified that the person in the photo claiming to be him is a woman named Shakeela Begum. Read more here.