A nearly three-year-old photo from a protest rally by farmers in Rajasthan is being falsely shared as recent from the Haryana farmer protests against the Centre over agriculture-related ordinances.

The photo shows a huge gathering of people on the road protesting. It is being shared in the backdrop of police lathi-charge on farmers at Pipli Chowk near Kurukshetra in Haryana on September 10, 2020, for defying prohibitory orders as they were headed to the grain market to take part in a rally reported the Hindustan Times.

The farmers were protesting against three ordinances passed by the Union cabinet in June 2020. (Read more)

The viral image is being shared with the caption, "What the Media didn't show you. Haryana. Farmers struggling for their rights and existence. Guess what Media did show you : Kangana Ranaut and JCB(2)"

A reverse image search showed that the photo is from a protest held by farmers in Sikar, Rajasthan in September 2017 against the then Bharatiya Janata Party (BJP) led Vasundhara Raje government.

Thousands of farmers had come out on the streets demanding a full loan waiver and other demands, including providing fair prices for their crops and took out a funeral procession of the chief minister's effigy throughout the city reported Patrika on September 4, 2017.

One can spot the same viral image that is being shared now in the Patrika article below. 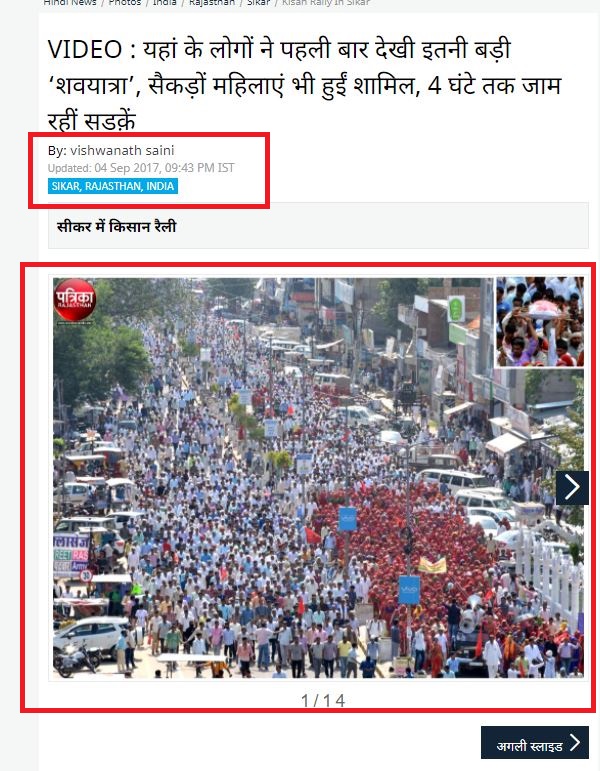 Additionally, the first photo shared by Kirti Azad of a young girl screaming is unrelated and old which is in several memes and has been taken from a still in an old video which states that she is getting an injection.

India Today had previously fact-checked the viral photo on September 12, 2020.

One can view other photos from the Haryana farmer protest held on September 10, 2020, in the Gaon Connection article below.