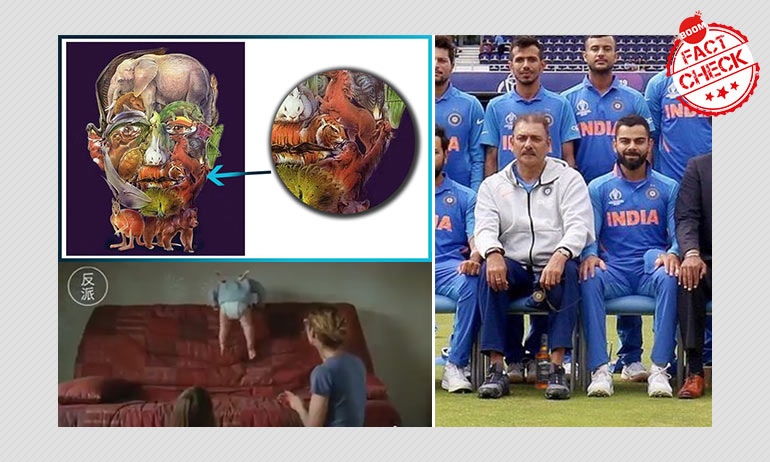 From Pulwama to elections, bank shutdowns to protests, 2019 has been filled with many dark phases - with fact checkers constantly drowning in disturbing content to fact check. Amidst all this, BOOM reporters came across some truly bizarre and absurd claims, being shared with equally bizarre photos or videos.

1. Will Finding A Camel In An Image Help In Diagnosing Risk Of Alzheimer's? 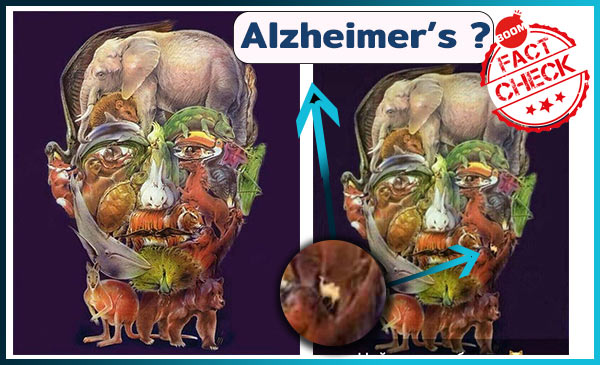 In September, we received an optical illusion on our helpline number of a face of a man made with pictures of animals. The photo was shared with a truly weird claim - "if you cannot find a small pixelated camel in the picture, then you have Alzheimer's".

Our fact check revealed that a complicated cognitive disease like Alzheimer's cannot be diagnosed using a simple test like this.

2. Cars Melting Due To High Temperature In Kuwait? A FactCheck 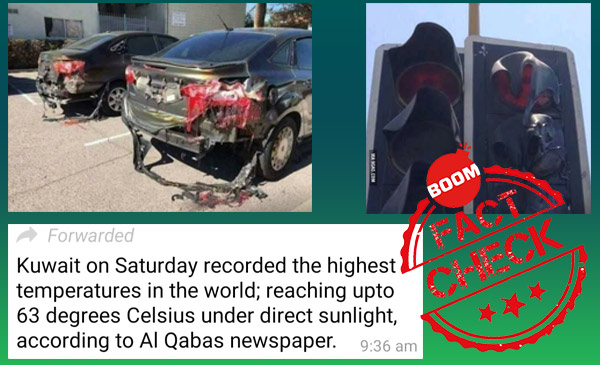 With global warming and climate change, it sure has been getting warmer every year. But did the temperatures rise so high that it literally melted cars and streetlights along the way? That is yet another claim that went viral in June, with the above image filling social media and WhatsApp. The claims suggested that it happened in Kuwait.

We found out that the cars in the photo melted due to a fire at a construction site in Arizona, US, while photo of the streetlights is actually from Kuwait which started melting after catching fire from an accident.

3. No, This Is Not A Video Of Madonna Singing The Hanuman Chalisa 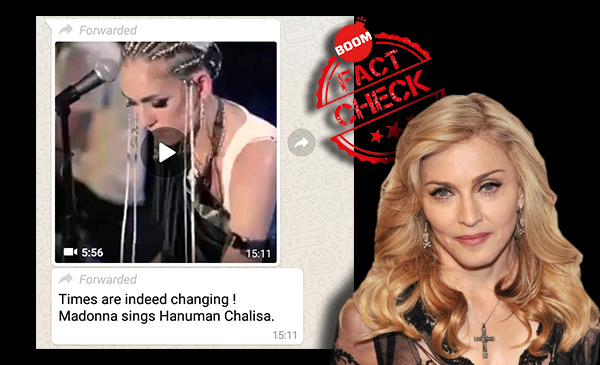 But alas, not every Caucasian woman is Madonna - this song happened to be sung by a singer from Kyiv called Uma Devi. Devi is part of a band called Shanti people, which mixes Vedic mantras with contemporary electronic dance music.

4. 'Making Out In The Backseat To Be Fined': iDiva Publishes Misleading Article 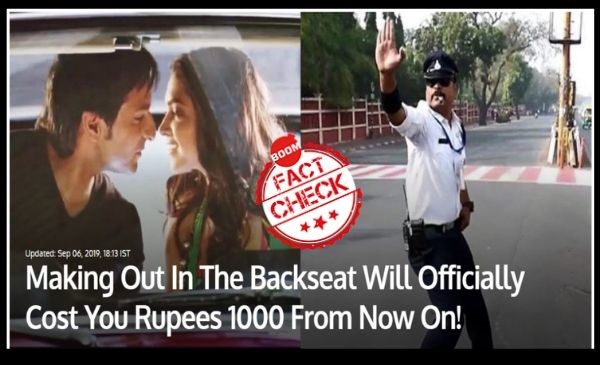 Public display of affection is highly frowned upon in India. It can get you in a lot of trouble, with a possibility of police officials or random strangers threatening you with "We'll tell your parents". But can making out in the backseat of a car get you officially fined now?

Women's lifestyle website posted an article in September with a headline which claimed the same. It also carried a photo of Deepika Padukone and Saif Ali Khan from Love Aaj Kal, where they are about to kiss in the backseat of a car. But upon reading the article closely, we found that it wasn't a fine for making out at all - it was for not wearing the seat belt in the backseat.

5. No, Modi Apples Are Not Named After PM Narendra Modi

Prime Minister Narendra Modi does enjoy immense popularity in certain sections of the society in India and abroad. But are companies capitalizing on this popularity by naming their products after him?

In March, we came across multiple posts on social media claiming that an Australian businessman has named a new type of apple after Modi - the Modi Apple. But alas, we found out that the inspiration behind the name was another Modi - Armedeo Clemente Modigliani, a 19th century Italian painter.

6. Ravi Shastri With A Bottle Of Jack During World Cup 2019? No, That's Bad Photoshop 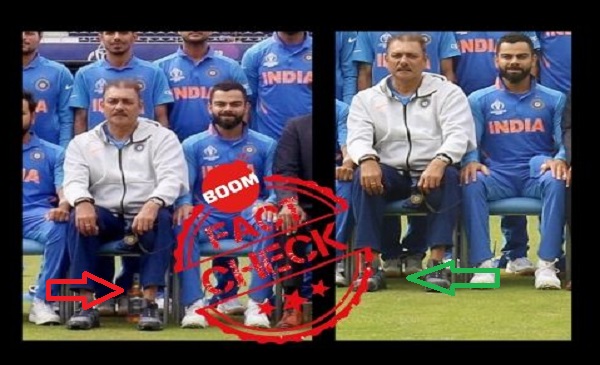 Did Indian cricket team coach Ravi Shastri try to hide a bottle of Jack Daniel's under his seat, while taking an official photo with the team? As bizarre as this claim sounds, many people fell for it during the World Cup 2019 with the photo above going viral on the internet.

However, fact remains that the bottle of Jack has been placed there using photoshop, and Shastri had no hand in that.

7. Fake News Gives You Wings: Movie Clip Shared As 'Boy Who Can Fly' 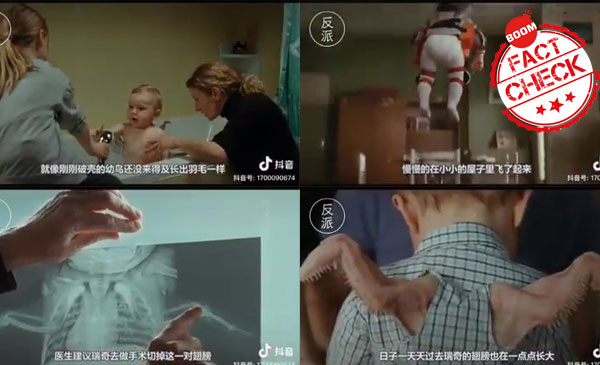 Have you ever wondered if there are humans on this planet who have wings and can fly? Then you may have probably fallen for this viral message which claimed the same.

In October, we received a video which looked straight out of a film. It documents the growing up of a young boy who's born with wings and slowly learns to fly as he grows - all this with an obscure Mandarin commentary running in the background. Many people shared this on our helpline, genuinely interested in finding out if this is true.

However, we still are not living in an X-Men universe, and the video is definitely from a fictional movie called Ricky by French director Francois Ozon. 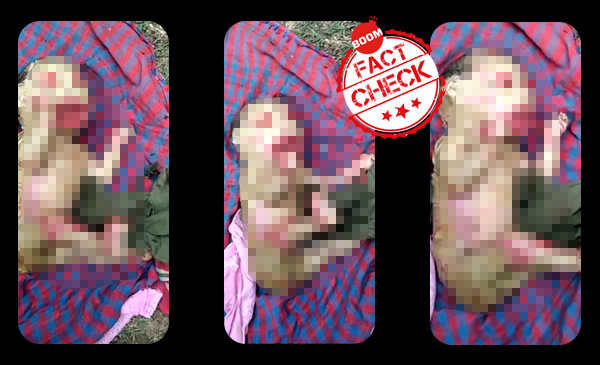 This one is bizarre and disturbing, and an unforgettable fact check in the darkest ways possible. In November, we received an extremely strange video of a toddler with thick white and scaly skin, bulging red eyes and swollen lips. The toddler was crying away in pain in the video, while surrounded by a group of people.

The caption shared with the video claimed that it is a "demon baby" who "consumed the intestines of the mother" at childbirth, and also mysteriously ended up killing one of the nurses.

While the condition of the baby does look strange and unknown - it is anything but a "demon". The unfortunate toddler in the video is suffering from a rare skin disease called Harlequin Ichthyosis. 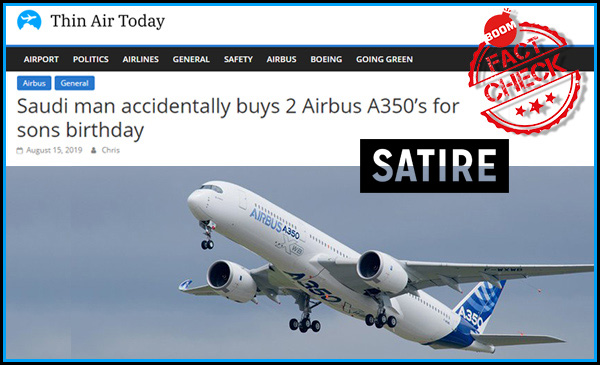 There are many a-stories about Saudis and their immense wealth - so it is easy to have fallen for this one. In August, social media went berserk over a story about a Saudi man who was looking to buy some model airplanes for his kid - but he ended up buying two actual Airbus for more than 300€ million. The story made it seem like an honest mistake - just things Saudis do.

However, this story originated from an aviation related satire website Thin Air Today - and the writer confirmed that it definitely is not a true story.

10. Viral Alert: This Is Not IAF Pilot Abhinandan Dancing With Pakistani Soldiers

You cannot possibly forget one most shocking events of the year - Wing Commander Abhinandan crashing in Pakistan and getting captured during the aerial skirmish with Pakistan after the Balakot airstrike.

Just after Pakistan stated that they would return the pilot back to India, a video cropped up on social media claiming to show Abhinandan dancing with Pakistani soldiers. As bizarre as this sounds - many people fell for it.

However, upon closer look you'll notice that none of the men in uniform bear any resemblance to the Indian pilot. Moreover, this video existed online before Abhinandan crashed in Pakistan.