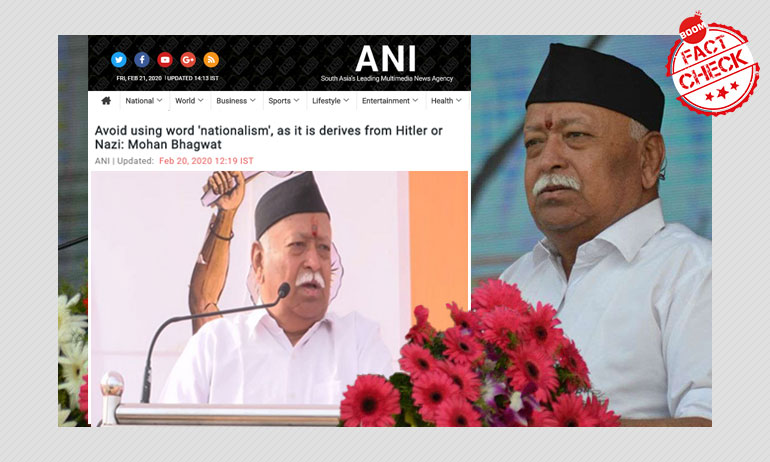 Rashtriya Swayamsevak Sangh (RSS) chief Mohan Bhagwat's speech in Ranchi in which he recalled an anecdote of an RSS worker in the UK urging the former to avoid using the word 'nationalism' has been misquoted by a host of prominent Indian news outlets by attributing the statement to Bhagwat.

BOOM found that the misreporting was amplified by Asian News International (ANI) in its article titled 'Avoid using word 'nationalism', as it is derives from Hitler or Nazi.' The headline of the story likened the concept of nationalism to Nazism and Hitler and attributed the statement to Bhagwat who was was narrating what an RSS worker in the UK had told him.

ANI's story was picked up namely by NDTV and Economic Times while Times of India and The Hindu used a Press Trust of India report.

India Today, Hindustan Times, Quint were among several other media outlets to misquote Bhagwat. The misleading quote was also widely shared on Twitter.

NDTV incorrectly attributed the statement to Bhagwat in this video.

Word 'nationalism' can be likened to 'Nazism' by some: RSS chief Mohan Bhagwat | India News - Times of India
If Mohan Bhagwat ji really believes in what he has said, why doesn't he order ModiShah to withdraw CAA,NPR and NRC? https://t.co/wiHsey3UE6

It is all right to say nation, national and nationality but not nationalism. Because it alludes to Hitler, Nazism and Fascism (in England), @RSSorg chief Mohan Bhagwat saidhttps://t.co/cSPOOa7aiI

Scroll was one of the few media outlets which attributed the statement correctly.

'It is all right to use words like nation, national, and nationality, but nationalism is always associated with Hitler.'

The now viral statement is from an RSS programme held at Dr Shyama Prasad Mukherjee University in Morabadi of Ranchi on February 20, 2020.

In his speech, Bhagwat spoke about the need of strengthening the Sangh (RSS). The RSS chief further equated the strengthening of RSS with that to India becoming a 'Vishwaguru' or world leader.

ANI had also tweeted a portion of Bhagwat's speech wherein the statement was correctly attributed to an RSS worker Bhagwat had met in the UK a few years ago.

In this clip, the RSS chief can be heard saying 'Several countries in the world rose to power and lost it too. Today, several countries have become powerful, we call them superpowers. What do they do after becoming superpowers? They influence other countries, use the resources of world for themselves. They have been doing it for long and will continue and therefore several intellectuals around the world think becoming a superpower is not a good thing. Nationalism, the word, is not viewed positively these days.'

He says, "A few years ago I had gone to the UK for some RSS work. I interacted with intellectuals there. One of the Sangh workers told me to be cautious about the usage of words as English is not our mother tongue. Words written in a book can differ from the spoken words. Hence, you should not use nationalism. Nation is fine, national is fine, even nationalist is fine but don't say nationalism. Because nationalism has roots in Hitler, Nazism, fascism. The word now has several connotations." He goes on to add, "But we know that every time India became a powerful nation, it has benefited the world. The world today needs India."

BOOM checked the two-part address of Bhagwat and found that in his hour-long speech, he talks about the need of unifying Hindus and making India a great country.

However, at no point does Bhagwat liken nationalism to Nazism or fascism.

You can watch the videos below