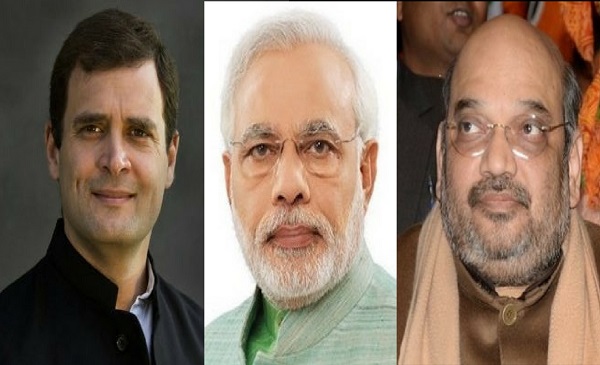 On August 15 as India celebrated its 72nd Independence Day, several people on social media called out politicians for their gaffes with the national anthem and the national flag. Not only ordinary citizens, political parties also used the opportunity to shame its rivals for allegedly disrespecting the national symbols.

But did the leaders really disrespect the national symbols as the tweets claim?

Video No.1: Did PM Narendra Modi disrespect the national anthem during the Independence Day event at the Red Fort?

A video of Prime Minister Narendra Modi from Independence Day event at the Red Fort showed him drinking water while the national anthem was being played in the background. Vikas Yogi from the AAP tweeted this particular video saying "look at the one who keeps giving knowledge about our national anthem. "

This clip posted on Twitter is a short clip of only five seconds and shows only a part of the entire event.

When we took a look at the whole video, we found out that just after PM Modi gave his 80-minute long speech, he went ahead to drink some water. This instantly coincided with the national anthem playing in the background. Modi can be seen standing still for the whole national anthem.

Video No. 2: Did BJP President Amit Shah disrespect the national flag while hoisting it on Independence day?

Another video that got a lot of hate for the Bharatiya Janata Party was from the BJP head office in Delhi when the party's National President, Amit Shah hoisted the flag there. The flag that was supposed to be hoisted touches the ground. Amit Shah on realising the gaffe immediately pulls the string and the flag goes up in the air. After this, he turns towards the members of the BJP and gives a salute.

But this is not the only reason why the video went viral. A DD News anchor's muffled reaction of disbelief, on seeing the flag being pulled down by Shah also helped the video go viral.

Wishing a healthy and long life for the DD news commentator who could not hold back his "tch tch tch... Disaster..." remark upon seeing this performance by BJP's national president: pic.twitter.com/dnbCOWNZZH

When Amit Shah lowered the flag instead of hoisting the flag, it was not done deliberately to disrespect the national flag but seemed more of an accident. But in the midst of all this embarrassment, Shah forgot to salute the flag and instead saluted the members of the BJP standing in front of the stage.

Section 6 of the Part three of the Flag Code of India, 2002 has laid down guidelines about saluting the national flag of India. It says, "During the ceremony of hoisting or lowering the Flag or when the Flag is passing in a parade or in a review, all persons present should face the Flag and stand at attention. Those present in uniform should render the appropriate salute. When the Flag is in a moving column, persons present will stand at attention or salute as the Flag passes them. A dignitary may take the salute without a head dress."

Video No.3: Did Rahul Gandhi disrespect the national anthem in one of the gatherings in Rajasthan?

The third video though not from Independence day, but falls in the same category. A short clip from Rahul Gandhi's recent visit to Rajasthan was tweeted by Amit Malviya from the BJP claiming that he doesn't respect any national institutions, symbols or protocols. The duration of the clip is 15 seconds.

Yesterday, in Rajasthan, Rahul Gandhi seen joking even while national anthem was being sung. He doesn’t respect any national institutions, symbols or protocols... Shame! #RahulInsultsNationalAnthem pic.twitter.com/z1frEz5tHE

This particular video is from a gathering in Jaipur where Rahul Gandhi had addressed the party workers and leaders on August 11. The video that Amit Malviya tweeted is true but is only a part of the entire meeting. The Congress party posted a live video of the gathering from Jaipur on their YouTube channel. One hour twelve minutes into the video, even as a male voice starts reciting the national anthem, Rahul Gandhi and the others can be seen joking and having an animated conversation. But on realising that the anthem has begun, they stand still in attention till it is concluded.