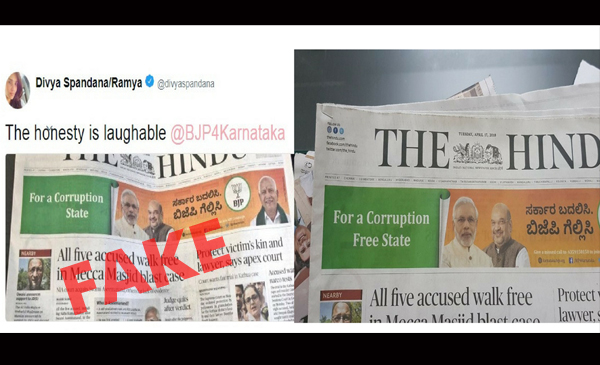 The actor turned politician, better known as Ramya, posted the picture with text which read 'The honesty is laughable'. The ad, which contained images of Prime Minister Narendra Modi, BJP President Amit Shah and BJP's Chief Ministerial candidate for Karnataka B.S. Yeddyurappa, had the line 'For a Corruption State.'

When contacted, Spandana admitted to knowing that the image was photoshopped and that her tweet was meant to be treated as sarcasm.

"I received it on WhatsApp and I know it is photoshopped. It was meant to be sarcasm as all three of them are corrupt," Divya Spandana told BOOM.

The text in Kannada roughly translates as 'Change the government. Bring in the BJP') Click here to view an archived version of the tweet.

Apart from the sentence being grammatically incorrect, the picture when magnified shows clear signs of being edited. Here the word 'free' after the word 'corruption' has been removed thus changing the meaning of the sentence. 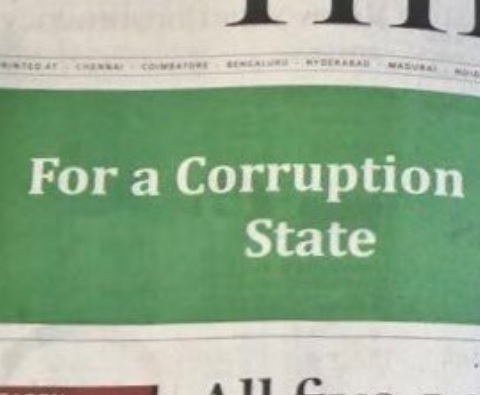 Below is an actual photo of the newspaper's April 17, 2018 edition from Bangalore. 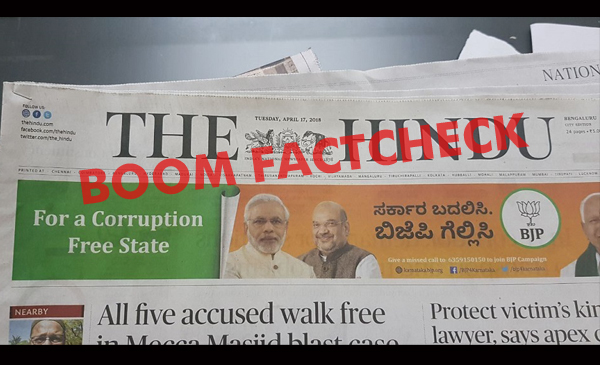 Amit Shah BJP Congress Divya Spandana fake news fake photo featured Karnataka Karnataka elections Narendra Modi phoshopped Photoshop Twitter Yeddyurappa
If you value our work, we have an ask: Our journalists work with TruthSeekers like you to publish fact-checks, explainers, ground reports and media literacy content. Much of this work involves using investigative methods and forensic tools. Our work is resource-intensive, and we rely on our readers to fund our work. Support us so we can continue our work of decluttering the information landscape. BECOME A MEMBER
📧 Subscribe to our newsletter here. 📣You can also follow us on Twitter, Facebook, Instagram, Youtube, Linkedin and Google News 📝Stay updated with all our latest fact check stories.