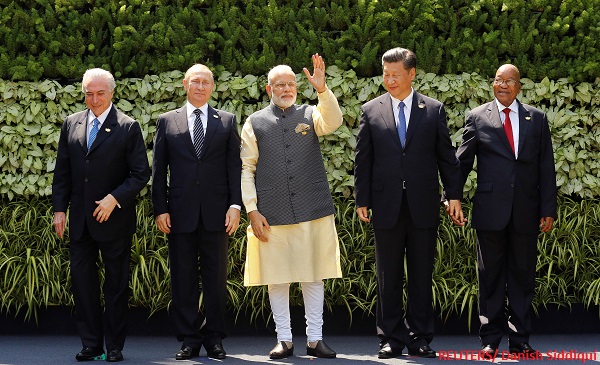 The idea of establishing an alternative credit rating agency led by the BRICS bloc of countries is gaining momentum. But there are questions as to whether it will prosper given the major challenges it’s bound to face.

Leaders from the bloc made of Brazil, Russia, India, China and South Africa are championing the idea. The idea formerly emerged during the 2015 BRICS summit in Ufa and was affirmed by the Goa Declaration at the 8th BRICS Summit. Most recently South Africa’s President Jacob Zuma said BRICS countries had taken the decision that they could rate themselves, and perhaps others too. The aim would be to ensure a more “balanced view” when ratings are made.

Both Brazil and Russia have recently been downgraded by Moody’s. And for over a year South Africa has lived with a possible downgrade by the “big three” Western credit rating agencies, Standard & Poor’s, Moody’s and Fitch.

The big three have faced increasing criticism. Critics claim that the frequent downgrades of developing countries are unjust and serve Western political interests.

BRICS has started engaging financial experts on a business model for the new rating agency as well as what methodology it would adopt.

This isn’t the first time there’s been an attempt to challenge the big three. China, Russia, India and Brazil have all established their own credit rating agencies. But none has ever come close to establishing itself as an alternative.

Will the BRICS initiative be the exception?

Critics of the big three were emboldened after the 2008 financial crisis. The rating agencies were forced to pay over $2.2 billion in fines relating to their complicity in the credit crisis. This further damaged their credibility and heightened accusations, particularly in emerging countries.

Critics have also attacked the rating agencies’ issuer pay model. Under this system credit rating agencies are paid by the institutions being rated (debt issuers) and not by the investors who use the information, creating a conflict of interest. Critics also argue that this entrenches geopolitical biases.

The hope is that a new agency would compensate for the perceived bias in the global financial architecture. It would also create competition and offer investors, issuers and other stakeholders a wider choice and a more diverse view on creditworthiness.

Weakness in the BRICS muscle

Given that BRICS is home to half the world’s population, accounts for more than a quarter of the world’s economic output and has recently set up a nascent New Development Bank, the countries under its banner have, between them, the capacity to establish an influential credit rating institution.

But questions have been raised about whether the new rating agency satisfies a financial need or is politically motivated. And if it will be competent to provide an independent, objective and credible credit rating service based on sound methodology.

China has already expressed concerns about the credibility of a new agency. Analysts have also strongly criticised the probable adoption of the existing “issuer-pay” model. This would mean that the current model is simply replicated.

Considering that the three major rating agencies control more than 90% of the world’s ratings business, establishing a new one wouldn’t be easy. It could take years, or even decades, to gel.

There have been previous attempts to launch new ratings agencies. All failed to take off. Examples include the Lisbon headquartered ARC Ratings which was launched in November 2013 as a consortium of five national ratings agencies from South Africa, Malaysia, India, Brazil and Portugal. It is yet to release its first sovereign rating.

The CARE Rating agency of India, started in April 1993, is still rating small to medium enterprises.

The Global Credit Ratings (GCR) was established in South Africa in 1995. It is only planning to start offering sovereign credit ratings from 2017.

Others that have been launched include:

None has established itself as an alternative credit rating agency of choice for emerging countries.

The biggest task for a new BRICS credit rating agency will be to convince investors, particularly those from the US and Europe, that the ratings assigned are politically impartial. One way of doing this would be to adopt the “investor-pays” model where investors subscribe to ratings released by the agencies, and the subscription revenues become its source of income. This would ensure transparency and credibility while avoiding conflicts of interests.

But adopting a new model might not fly given that main users of the credit rating information are global pension and mutual funds which currently use at least one of the “big three” rating agencies. They are therefore unlikely to trust any ratings from the new BRICS rating agency with a yet to be tested rating model.

Adopting a new model would also be tricky as the BRICS rating agency would need to wield enough influence to be able to attract sufficient subscriptions from international funds.

Finally, investors will be sceptical about the new BRICS rating agency’s ability to compensate for losses in the event that it issues false ratings as the “big three” did in the US.

The BRICS agency is likely to be another failed rating agency project unless it can overcome these three hurdles.

Misheck Mutize is Lecturer of Finance and Doctor of Philosophy Candidate, specializing in Finance, University of Cape Town.

This article first appeared on theconversation.com