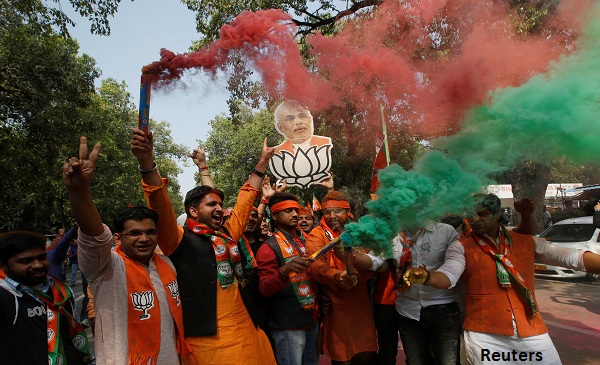 Supporters of BJP celebrate after learning of the initial poll results outside the party headquarters in New Delhi, India, March 11, 2017.

The BJP has once again surpassed all expectations emerging out of exit polls. In a massive sweep, BJP has captured 324 seats out of the total 403 on offer, thus making a strong statement from the country’s most populous state housing over 200 million people. The saffron party and its allies, Apna Dal and Suheldev Bhartiya Samaj Party (SBSP), in the process pushed rivals SP-Congress combine and the BSP far behind. The SP alliance that promised much has failed miserably with leads only in 54 seats and BSP barely managing to hold on to 20 seats.

So what are the key takeaways from these elections results

1) Prime Minister Narendra Modi has demolished all ‘doubting thomases’, both within and outside the party of his ability to connect with the voters. Like a pinch hitter who comes down the middle order when his team is falling weak, Modi supported by his man Friday and BJP President Amit Shah went for a blistering campaign. The top two had realized towards the end of the second phase polls that the party will need to go all out to reach the voters. Union Ministers, ranging from Arun Jaitley to Smriti Irani to Ravi Shankar Prasad to JP Nadda were seen going door to door, reaching out to various segments of voters addressing their concerns about the policies of the Modi led government at the centre. It also helped that Akhilesh Yadav positioned his campaign as a fight between a state chief minister and the Prime Minister of the country. For a state that has seen both the SP and the BSP at various intervals, Modi’s persistent claims to give the BJP a chance once again were too good to resist.

2) Demonetisation has failed to make a dent in the fortunes of the BJP. While the GDP for the quarter ended December 2016 grew at an astonishing 7%, critics of the note ban move were still waiting to see the reaction of the voters in UP. The remarkable victory by BJP has shown that Modi’s gamble at taking a huge risk in November last year, just months ahead of the 5-state polls, has worked in the party’s favour. Modi had also projected demonetisation as the government’s drive to flush out black money and a fight between the rich and the poor. Post this victory, there is no doubt that the voters in UP have not considered the negative impact of notebandi as reason enough to deny the BJP a chance to rule the state.

3) The grand old party of the country, Congress, has moved one more step closer to political irrelevance unless they decide to take some quick measures to galvanise their party workers and attract new voters to their fold. Congress leaders like Digvijaya Singh and Sandeep Dikshit have called for introspection and taking some important steps. Dikshit has gone ahead and challenged the senior leadership to take responsibility for this defeat. On being asked by Pallavi Ghosh of CNN News 18, if Rahul Gandhi is taking too much time to mature, Dikshit curtly replied,”There is no more time left to mature”. Gandhi has issued a statement saying that the party will ‘introspect’ the defeats in the two states of Uttar Pradesh and Uttarakhand.

But for the Congress, the writing on the wall is clear. Their victory in Punjab under the leadership of Captain Amarinder Singh has shown that the party can no longer ignore state leaders who have a much better understanding of their state. The fact that they are still in the running to form a government in Goa and Manipur should come as a big relief for the party.

4) Arvind Kejriwal’s AAP was supposed to give a tough fight to the Congress and BJP in Goa and in the running to form a government in Punjab. The party has cornered 22 seats, standing second in the tally but in the state of Goa, they have failed to win any seat. This should come as a rude wake-up call to Kejriwal’s national ambitions, considering that he has always fancied his chances against Narendra Modi – almost like a fight between David and Goliath. Kejriwal should realize that his party is too young and lacks the political base to take on a party that has built its cadre over several decades. The sooner he realizes, the better it is for him and his party.

5) With some of the key state elections done, what does this all mean for the Modi government at the centre? The victory in UP and Uttarakhand is expected to give the party some major numerical push in the Rajya Sabha, helping its legislative agenda for reforms without taking help of the opposition parties. UP sends 31 Rajya Sabha MPs out of which 10 comes up for re-election in 2018, boosting its tally further before the crucial 2019 general elections. Omar Abdullah of the National Conference tweeted today that post this massive victory; he does not see how anyone can stop Modi’s march to victory in the 2019 national elections unless a strong leader emerges from the opposition. For now, that seems to be a correct analysis considering that the principal opposition party, the Congress, has failed to provide any viable alternative to face Narendra Modi.