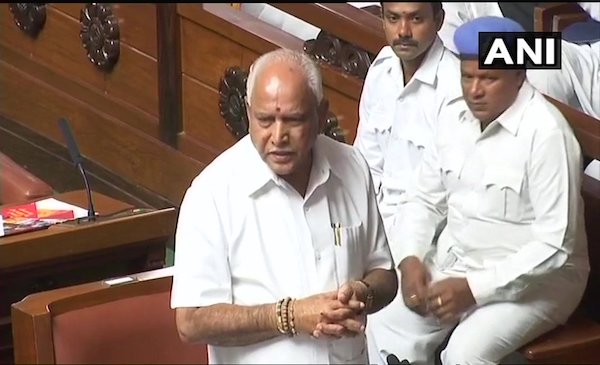 In a major victory for the Congress-JD(S) combine, BJP's 3-day Chief Minister BS Yeddyurappa resigned after delivering an emotional speech in the Karnataka assembly. Yeddyurappa who was expected to move the trust motion before 4 pm today took everyone present by surprise when he started delivering a speech addressed to the people of Karnataka.

Yeddyurappa thanked Prime Minister Narendra Modi, BJP President Amit Shah for putting their faith in him and then moved on to remind everyone that his only aim to form the government was to serve the farmers and dalits who he claimed are suffering in the state.

BS Yeddyurappa then now moved to the Raj Bhavan to submit his resignation to the Governor Vajubhai Vala.

I will travel across the state non stop. We have received tremendous love and support across the state. For 2019, I promise, we will win 28 out of all 28 Lok Sabha seats. I won't relent. I will continue to fight. I hereby resign as CM. I thak people of Karnataka : Sri @BSYBJP

While it was fairly clear closer to the trust vote that the BJP is likely to struggle to get the numbers, Yeddyurappa's resignation came as a big surprise to the opposition bench. The celebrations began in the assembly itself with victory signs being waved by leaders from the two parties and congratulatory messages on Twitter. "Democracy has won in Karnataka. The conspiracy made by the BJP has failed to authorize the anti-constitutional measures," tweeted former chief minister and Congress leader Siddaramaiah.

With the proceedings live and every citizen becoming a pro tem Speaker, democracy in Karnataka was saved -- for the time bring.

Yeddurappa disposed, Modi, Shah stand exposed. Saga of imposition of a government which lacked majority or popular vote was shameful and an insult to our democracy. The tactics of bribing, threatening and abducting MLAs to manufacture majority failed.

And in what could be seen as signs of a broader celebration among the non-BJP parties, the reactions came in quickly from other leaders as well.

The corrupt and criminal designs of the BJP have been defeated. This shows the Governor's decision to invite the BJP to form a government was malafide and against his constitutional mandate. #Karnataka

Reacting to the trust vote and Yeddyurappa's resignation, the Congress President Rahul Gandhi launched a frontal attack against Prime Minister Narendra Modi and said that he is not bigger than the country or the institutions. Gandhi also attacked Yeddyurappa and the BJP MLAs for exiting the house before the national anthem could be played.

The BJP disrespected the mandate of the people of Karnataka, Goa Manipur and it tried to subvert democracy in Karnataka. That's what we fought against: Congress President @RahulGandhi #CongressDefeatsBJP

With the attention on the BJP around the trust vote now coming to an end, all eyes will now be on the JD(S)-Congress combine who are expected to be called by the governor to form the government and prove their majority on the floor of the house. There are also doubts on whether the new post-poll combine will manage to stay together after fighting a bitter election where the Congress called the party the 'B-team' of the BJP.

While there is no confusion on Kumaraswamy taking over as the chief minister, it is not clear who will be the deputy chief minister from the Congress. D K Shivakumar, senior Congress leader who also played a major role in keeping the party flock together is reported to be in the running after he made his displeasure clear to the party post the alliance with JD(S) was announced. The Congress with double the seats of the JD(S) is also expected to extract its pound of flesh by seeking key ministerial berths which may test the continuation of the politically opportunistic alliance.