A video of Democratic vice presidential candidate Kamala Harris waving from a platform is circulating in Facebook posts claiming that virtually nobody showed up to her recent rally in Florida. The video is misleading; the rally was a drive-in event and the angle of the footage obscures from view the cars and people who attended.

"Harris had six people show up today in Florida," reads the caption on a video viewed more than 40,000 times in an October 19 Facebook post.

The footage shows Biden's running mate smiling and waving from a platform. Just a handful of people are visible behind her. 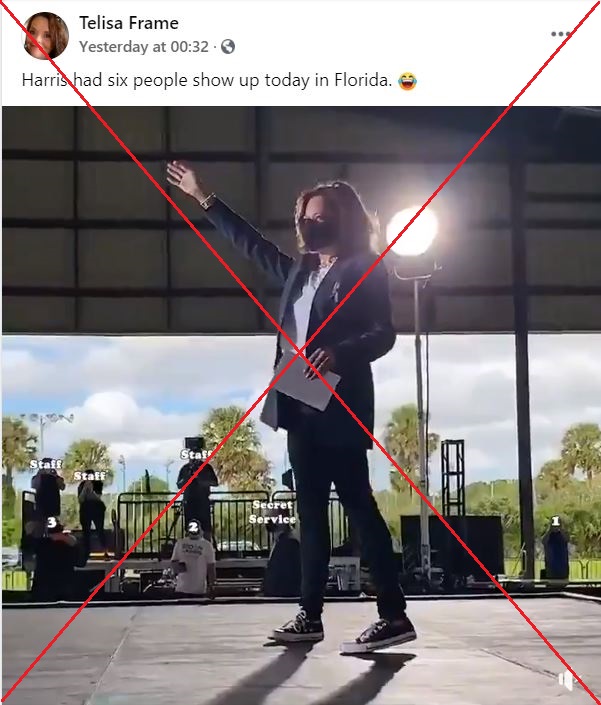 Similar posts have been shared by Facebook pages such as TRUMP POWER, which has almost 200,000 followers.

AFP ran a reverse image search of keyframes from the video and traced it to Harris's official Twitter account, where it was posted on October 19, 2020.

That day, Harris held two rallies in Florida -- visiting Orlando, then Jacksonville -- to mark the first day of in-person early voting in the swing state.

It was her first day back on the campaign trail after she suspended travel on October 15 due to her communications director testing positive for Covid-19.

Florida, it's great to be back! pic.twitter.com/eRNlu6RlFz

The background in the video indicates it shows the Orlando rally. This was held under a pavilion at the Central Florida Fairgrounds, whereas the Jacksonville event was in the open air, forcing Harris to shelter under an umbrella during her speech.

The Orlando rally was a drive-in event, with supporters asked to stay in their cars to limit the spread of the novel coronavirus. Cars can be seen at various points in the video posted to Harris's official YouTube page, such as at 13:40, 25:00 and 28:45.

Local reporter Rick Neale tweeted a video of people and cars gathered for the event.

A pavilion is packed with vehicles for this Kamala Harris "drive-in rally," and a chorus of honking horns is greeting the warm-up speakers @Florida_Today @USATODAY pic.twitter.com/ejdE5qIEJZ

Drive-in rallies and other smaller events have become a feature of Biden meetings during the pandemic, whereas Trump has been barnstorming the nation with rallies often criticised for lack of social distancing and masks, after his release from hospital where he was treated for Covid-19.