A video has been viewed tens of thousands of times on Facebook and Twitter alongside a claim it shows US police officers rounding up people on a beach in the city of Miami. The claim is false; the video has circulated in reports about a clash between police and people on a beach in Brazil over a football game.

The 58-second video shows uniformed police officers confronting a crowd of people on a beach. 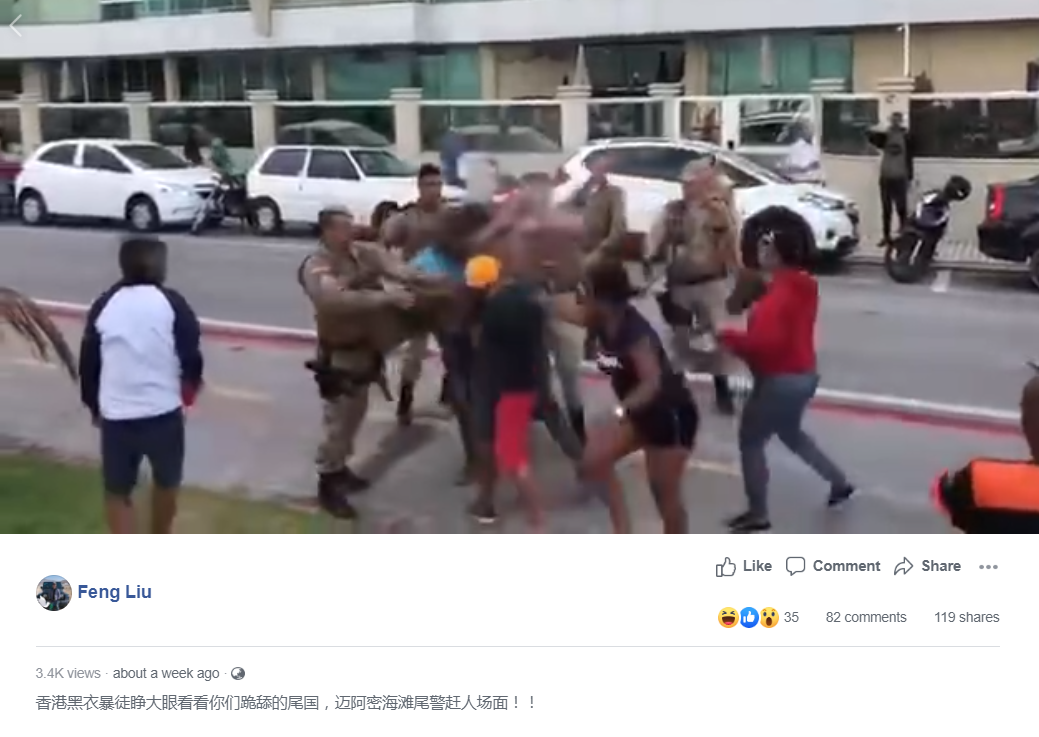 The video caption, written in simplified Chinese, translates to English as: "Hong Kong's black-clad rioters open your eyes widely and see the United States you flatter, the scene of US police driving away people on the Miami beach!"

Hong Kong has experienced months of violent pro-democracy protests since June 2019. Here is an AFP report about the unrest.

The video, and shorter versions of it, have also been shared here on Facebook, here and here on Twitter, alongside a similar claim.

It was also viewed tens of thousands of times here on Twitter and here and here on YouTube, published alongside a claim that it shows Brazilian police enforcing social distancing orders during the novel coronavirus pandemic.

A reverse image search and a subsequent keyword search found an identical video published in this March 11, 2019 article by the Brazilian news website topelegance.com.

The Portuguese headline translates to English as: "VIDEO: Game ends with a fight, shots and five injured police officers".

It was published alongside a longer version of the video in the misleading posts. The same clip can be seen from the nine-second mark to the one-minute eight-second mark.

Below is a screenshot of the topelegance.com report: 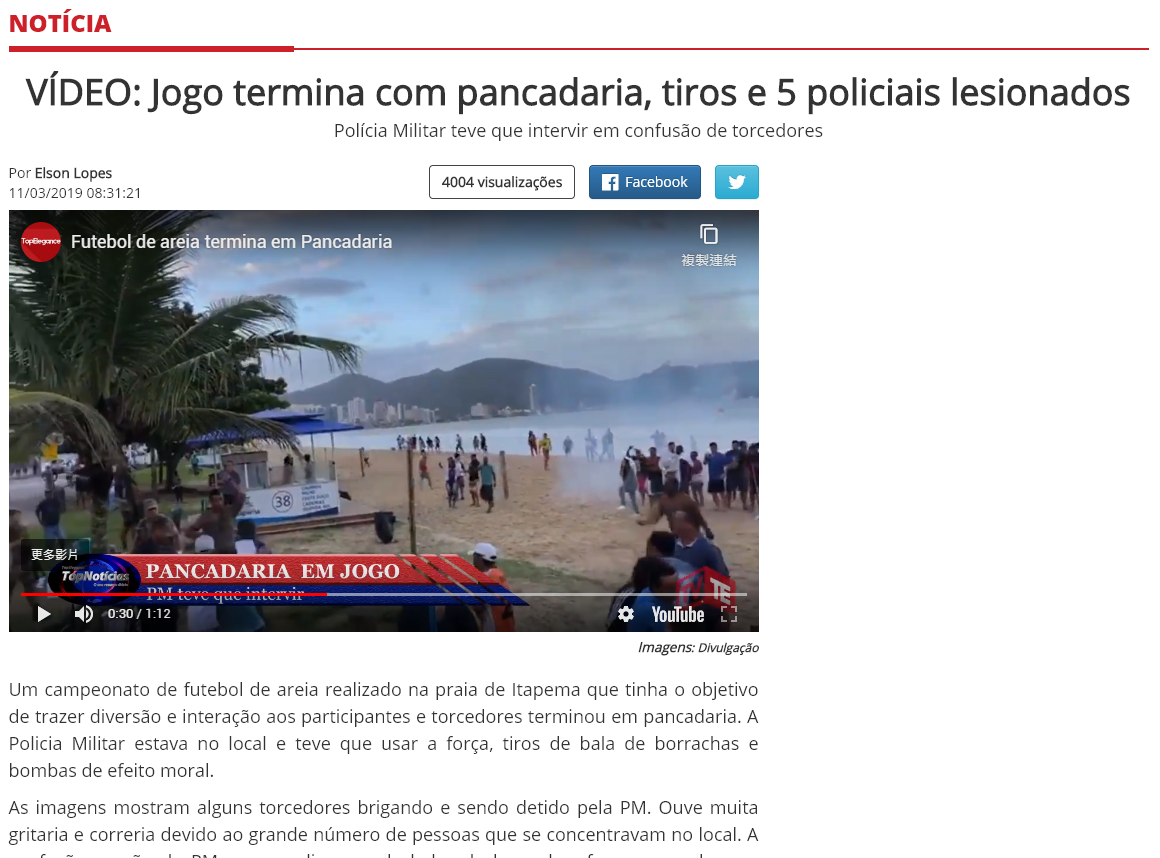 Screenshot of the topelegance.com report

The report reads, in part: "A beach soccer championship held at Itapema beach that aimed to bring fun and interaction to participants and fans ended in a fight. The Military Police were at the scene and had to use force, rubber bullets and stun grenades.

The incident was also reported by another local media, including the news websites Santa Catarina News, NSC Total and Diarinho.

Closer examination of the video also revealed an identifiable food stall. Below is a screenshot of the video, with the stall circled red by AFP. 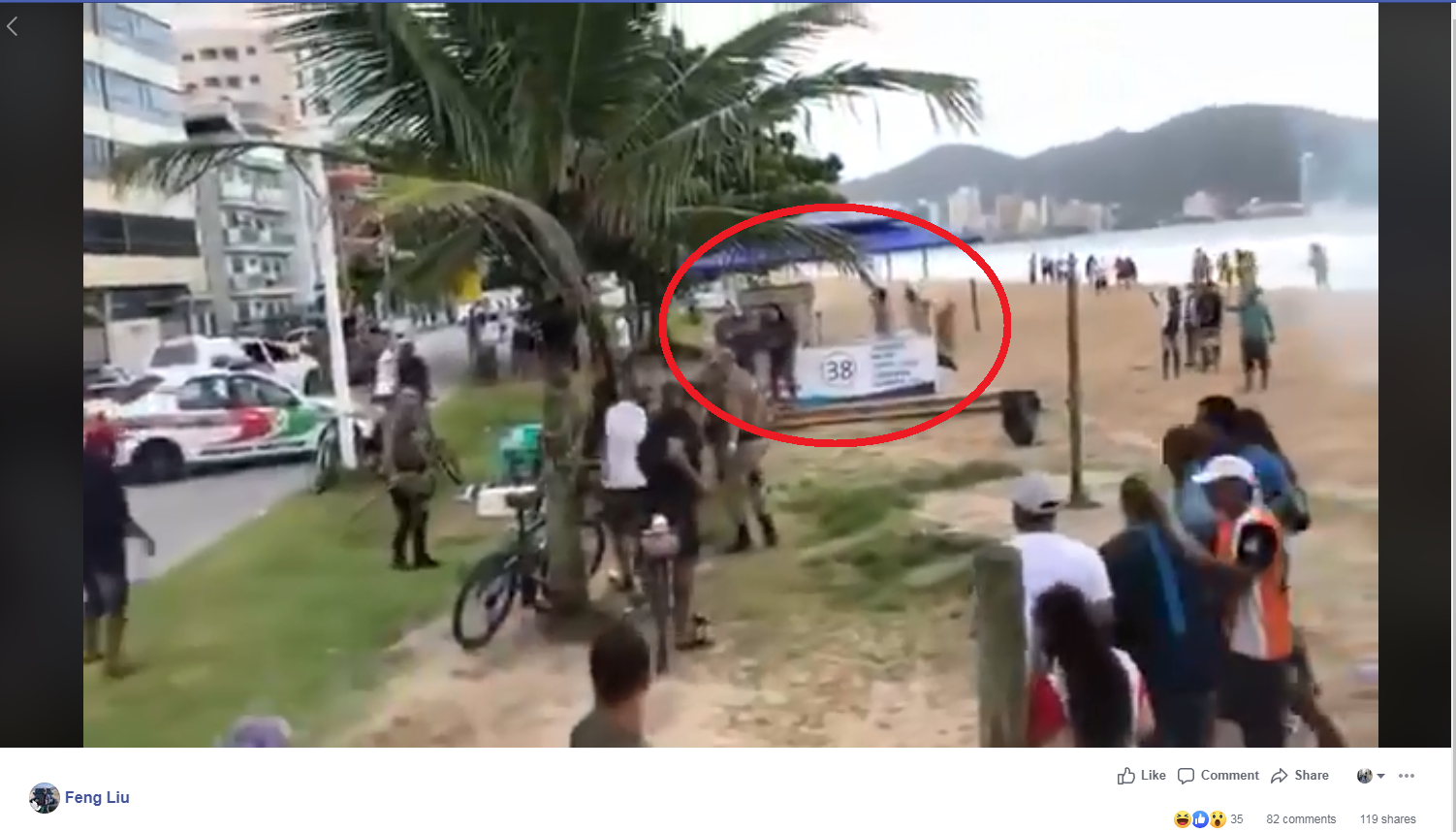 Screenshot of the video

The location of the incident can be seen on Google Maps in the Brazilian city of Itapema.

Claim :   Video shows US police officers rounding up people on a beach in the city of Miami, Florida.
Claimed By :  Social Media users in China
Fact Check :  False
Hong Kong protests Florida police brutality fake news facebook viral posts Brazil Miami FactCheck Viral video
If you value our work, we have an ask: Our journalists work with TruthSeekers like you to publish fact-checks, explainers, ground reports and media literacy content. Much of this work involves using investigative methods and forensic tools. Our work is resource-intensive, and we rely on our readers to fund our work. Support us so we can continue our work of decluttering the information landscape. BECOME A MEMBER
📧 Subscribe to our newsletter here. 📣You can also follow us on Twitter, Facebook, Instagram, Youtube, Linkedin and Google News