Images of an elephant with pink tusks and a rhino sporting a brightly coloured horn have resurfaced on social media as part of a viral meme. Purported to be examples of a new strategy to deter poachers using a special dye, the pictures were digitally altered to illustrate a proposed conservation initiative that was ultimately dismissed as impractical and pricey. 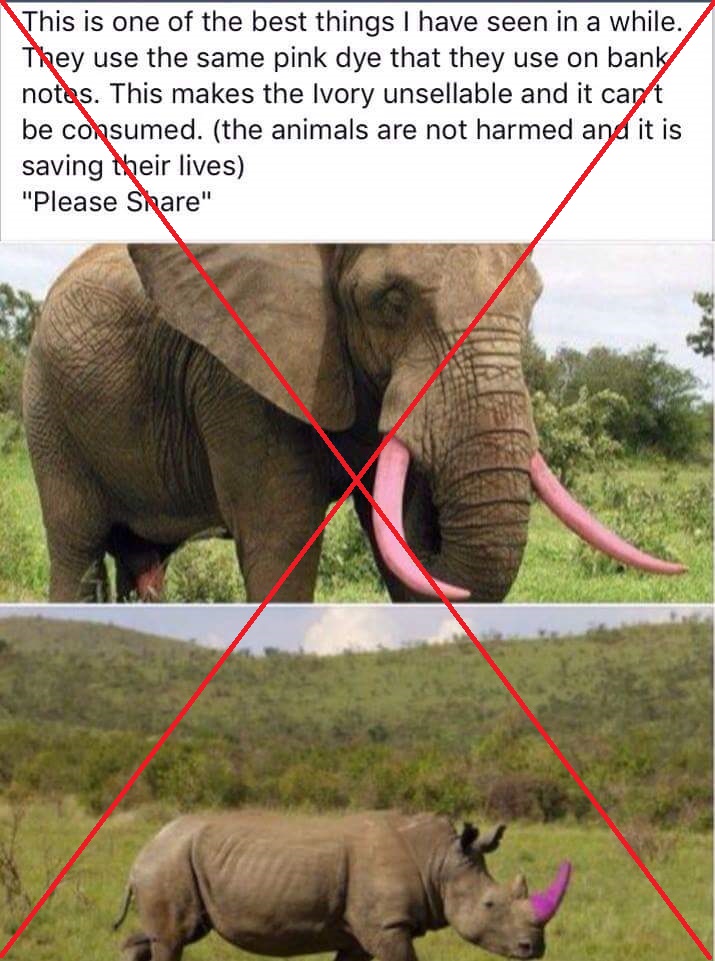 It claims that the dye makes the tusks and horn "unsellable" and unable to be consumed, while being perfectly harmless to the animal.

A reverse image search of the meme finds a 2015 article by Save The Rhino, titled "Dyeing rhino horn and elephant ivory".

It describes how in 2013 digital news and lifestyle magazine, Take Part, reported on efforts by a private game reserve in South Africa to deter poachers and devalue rhino horns by injecting a liquid pink dye -- toxic only to humans -- into the horns of 100 rhinos.

An archived version of the Take Part page shows an image of a rhino with a purple horn and a caption that reads: "This photo has been digitally altered and is not an actual photo of a rhino at Sabi Sand. (Photo: Heinrich van den Berg/Getty)". 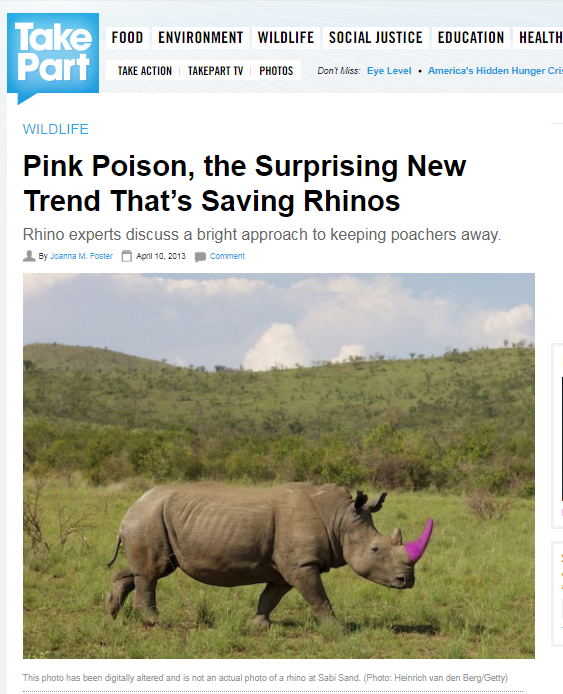 A screenshot taken on March 2, 2020 of the rhino image and its original caption on Take Part

Researchers looked into the efficacy of the horn infusions in this 2014 report and concluded the pink dye wasn't an efficient poaching deterrent.

According to their study, the dye did not permeate the entire horn, as shown in the digitally-altered image, and the exercise would be too costly and impractical.

"The infusion procedure takes at least 30 minutes per rhino (Rhino Rescue Project 2013). Together with searching, immobilizing, treating, reversing, and preparing drugs and equipment, a team can expect 90 minutes to complete treatment of one rhino, allowing a maximum of four rhinos a day if the area is large and finding rhinos is difficult," the report reads.

"In addition to such logistical requirements, a key challenge will be to identify and separate treated rhinos from untreated ones, extending the periods of operations in large areas and populations."

The original image by Heinrich van den Berg as seen on Getty Images does not show a purple horn as seen in the meme. 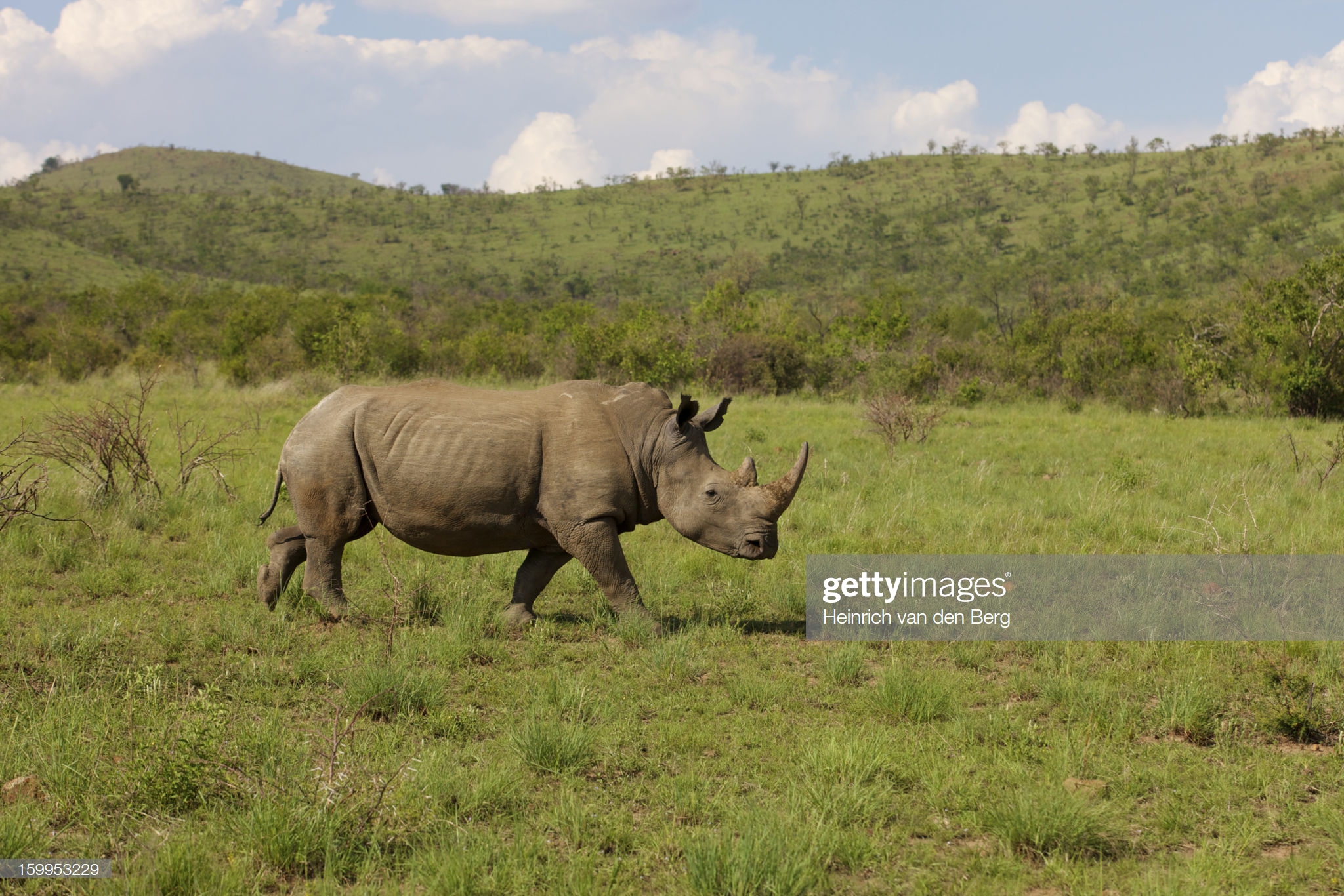 The same applies to the picture of the elephant -- a reverse image search on TinEye shows the image has been used at least as far back as 2009 (here and here) and the elephant's tusks are not pink. 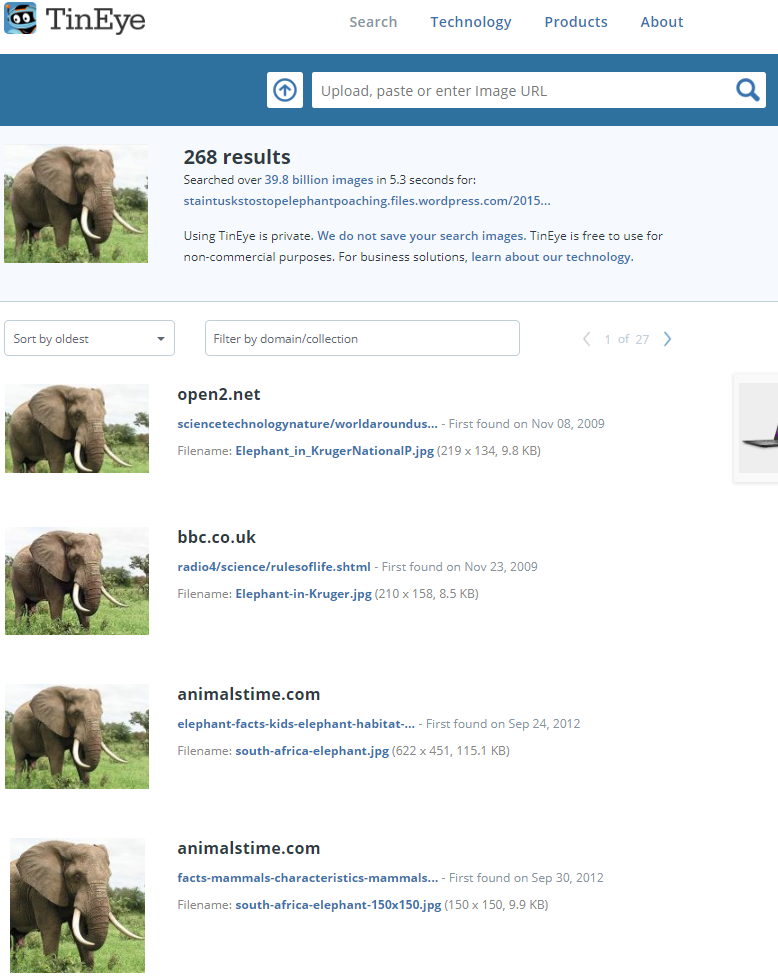 A screenshot taken on March 3, 2020 of the reverse image search results on TinEye

Claim Review :   Image shows rhino and elephant with horn and tusk dyed with pink colour, making them unsellable as the dye is toxic only to humans, while being perfectly harmless to the animal.
Claimed By :  Social Media users
Fact Check :  False
pink tusk theory anti poaching elephant ivory rhino horn elephant tusk pink dye Heinrich van den Berg Facebook Viral Viral Image South Africa wildlife poaching
If you value our work, we have an ask: Our journalists work with TruthSeekers like you to publish fact-checks, explainers, ground reports and media literacy content. Much of this work involves using investigative methods and forensic tools. Our work is resource-intensive, and we rely on our readers to fund our work. Support us so we can continue our work of decluttering the information landscape. BECOME A MEMBER
📧 Subscribe to our newsletter here. 📣You can also follow us on Twitter, Facebook, Instagram, Youtube, Linkedin and Google News