Claims of a plot by Antifa to attack white suburbs and the Gettysburg National Cemetery have proliferated on Facebook ahead of US Independence Day. Police, however, said they had no evidence that plans for such an attack exist, and a local official said the social media posts bear the hallmark of a similar claim from 2017 that proved to be false.

"ANTIFA To Desecrate Gettysburg National Cemetery on July 4 - Then MURDER & BURN White Suburbs under cover of 'Fireworks'," claims a lengthy Facebook post shared by many different users ahead of the US national holiday.

"This has been confirmed by the Gettysburg police department," a variant of the claim asserts. Similar theories were posted on YouTube and Twitter, while posters for the alleged event were shared to warn the local population.

Also Read: Is Establishing A One World Government A Part Of UN's 'mission goals'?

This prompted some online users to plan a counter protest, "Patriots Against Treason", encouraging people to gather in Gettysburg on the same day "in a show of patriotism against Antifa". 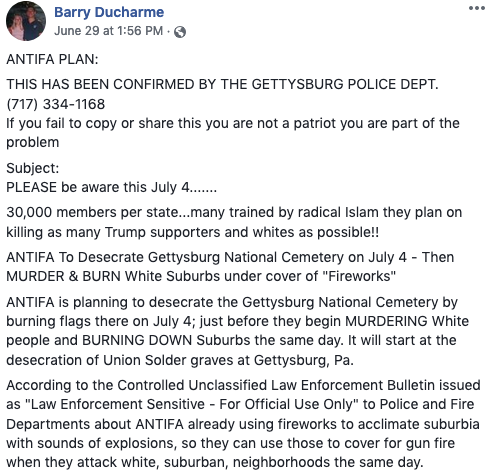 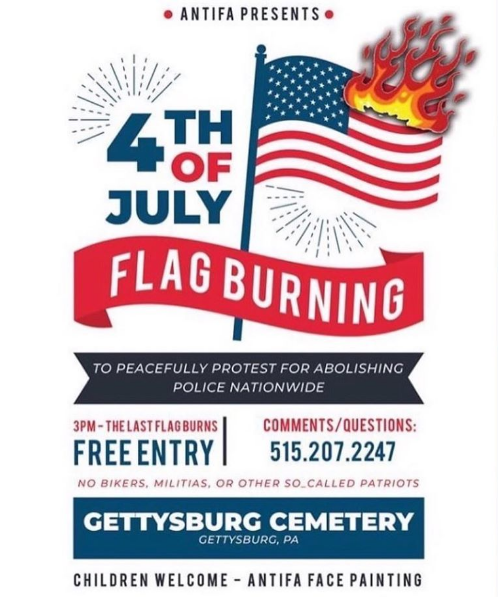 The posts appear to stem from a Facebook event for a "peaceful flag-burning... sponsored by Antifa" on July 4 to "protest police violence against unarmed civilians" at the Gettysburg National Cemetery, which commemorates casualties of the 1863 Battle of Gettysburg. The event was created by a now-deleted page, Left Behind USA, and caused outrage in the Gettysburg community.

The Twitter account associated with the Left Behind USA Facebook page was also permanently suspended for violating the platform's manipulation and spam policy, "specifically, operating multiple, overlapping accounts," a spokesperson for the social media company told AFP by email.

The information number advertised on Left Behind USA's Twitter account and on the event poster is disconnected.

"We've had PSP (Pennsylvania State Police) intelligence look into it and federal agencies as well and we haven't been able to validate the claim," Gettysburg Police Department officer William Orth told AFP by phone.

Orth said that his department has been "inundated with phone calls" about the Facebook posts, and added that "where it (the Facebook post) says Gettysburg police has confirmed the claim, there's no truth to that."

But the social media furor has left police having to plan for a possible disruption, regardless.

"No one from any of these groups associated with the social media posts or scheduled events have applied for a permit here at the park," Jason Martz, a spokesman for the Gettysburg National Military Park, told AFP by phone.

Antifa, short for anti-fascist, is a structureless movement dedicated to fighting fascism online and in public, and is organized into autonomous groups that do not coordinate large-scale events.

"Often anti-fascists will be the first ones to identify that these accounts are fake," Brian Friedberg, a researcher who focuses on far-right disinformation at Harvard's Shorenstein Center on Media, Politics, and Public Policy, told AFP by phone.

One Twitter account denounced the event as false, pointing out that a near identical situation unfolded in 2017. Mark Bray, a Rutgers University historian and author of "Antifa: An Anti Fascist Handbook," told AFP that this Twitter account has legitimate ties to the Antifa movement. 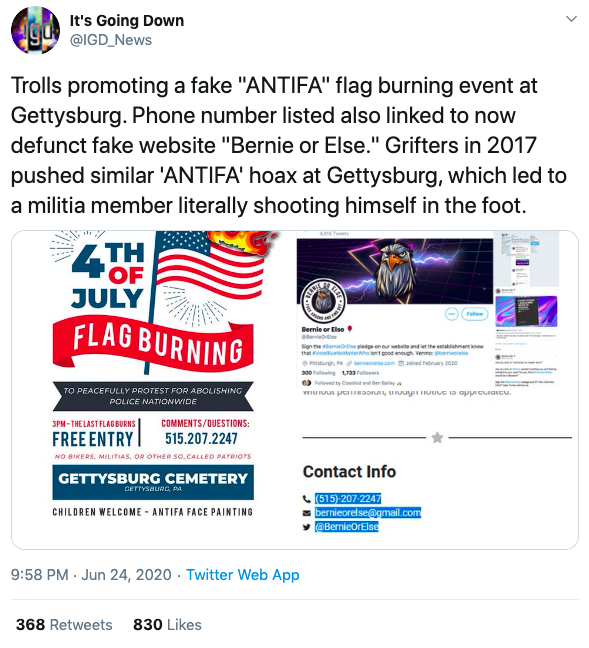 At that time local press reported that counter-protesters had planned to gather at the national cemetery after false reports of an activist group planning an event on the battlefield on July 1.

"The posts were made on Facebook, created a lot of fervour, a lot of people were very upset at this idea, lots of counter-protesters showed up, and very little happened," Martz recalled.

"I don't remember exactly which group it was but it had a very similar feel to it," he added.

The posts also allude to a recent conspiracy theory that says fireworks will be used to accustom the US population to war-like noises such as explosions. The theory was adapted to the Gettysburg context by claiming fireworks will provide cover for "Antifa" to carry out its plans in the area.

Also Read: No, Nazis Under Hermann Goering Did Not Defund German Police

Although a local news website Gothamist reported a 4,000 percent increase in complaints about fireworks in New York City in early June compared to the previous year, this does not seem to be the case in Gettysburg.

"We haven't received any complaints of fireworks, I haven't heard any fireworks in the area or in town," Orth told AFP.

Antifa has been the subject of several hoaxes in past weeks regarding its involvement in the protests against police violence and racism across the US that were spawned by the death of George Floyd, an unarmed black man from Minneapolis, who was arrested.

Over the past month, AFP Fact Check has debunked false reports of flyers seeking "professional Anarchists" and claims that Antifa was planning on marching in white neighborhoods.

Claim :   Antifa planning to attack white suburbs and the Gettysburg National Cemetery on July 4.
Claimed By :  Posts on Facebook, Twitter and YouTube
Fact Check :  False
George Floyd Black Lives Matter Black Lives Matter Protests Donald Trump US Protests USA US Independence Day Antifa Gettysburg Fact Check
If you value our work, we have an ask: Our journalists work with TruthSeekers like you to publish fact-checks, explainers, ground reports and media literacy content. Much of this work involves using investigative methods and forensic tools. Our work is resource-intensive, and we rely on our readers to fund our work. Support us so we can continue our work of decluttering the information landscape. BECOME A MEMBER
📧 Subscribe to our newsletter here. 📣You can also follow us on Twitter, Facebook, Instagram, Youtube, Linkedin and Google News