Social media posts claiming late Supreme Court justice Ruth Bader Ginsburg advocated lowering the age of sexual consent to 12 resurfaced after her death. The claim is false; it and can be traced to an altered quote taken from a 1977 report that Ginsburg co-authored on civil rights and sex bias in the US Code.

Some users mention "Pizzagate" in their post -- in reference to a discredited conspiracy theory that the hacked email of Hillary Clinton's staffers revealed a secret child sex ring -- while others directly accuse Ginsburg of being a pedophile.

"Now let's watch the left honor another pedo and all her work," one of the posts says.

Renewed interest in the claim coincides with the death of Ginsburg at age 87 on September 18 and a disinformation push under the hashtag #SaveTheChildren, which has been used to stoke fears about sexual predators across social media platforms.

A brilliant jurist and feminist icon, Ginsburg was named to the Supreme Court in 1993.

A keyword search in Google showed that two iterations of the claim can be found that same year in the Congressional record -- here on page 12 in the central column -- and in a testimony to the Senate Judiciary Committee -- here on page five in the first paragraph.

Conservative commentators Thomas L. Jipping and Susan Hirschmann, who opposed Ginsburg's nomination to the Supreme Court, attributed the quote to her.

A Google search for the quote attributed to Ginsburg did not lead to any evidence she advocated that position.​

The report aims to identify "sex-based references in the United States Code," and "eliminate sex-discriminatory provisions in the Code."

Page 102 is part of a chapter that aims to "eradicate sex-based discrimination in the catalogue of crimes." 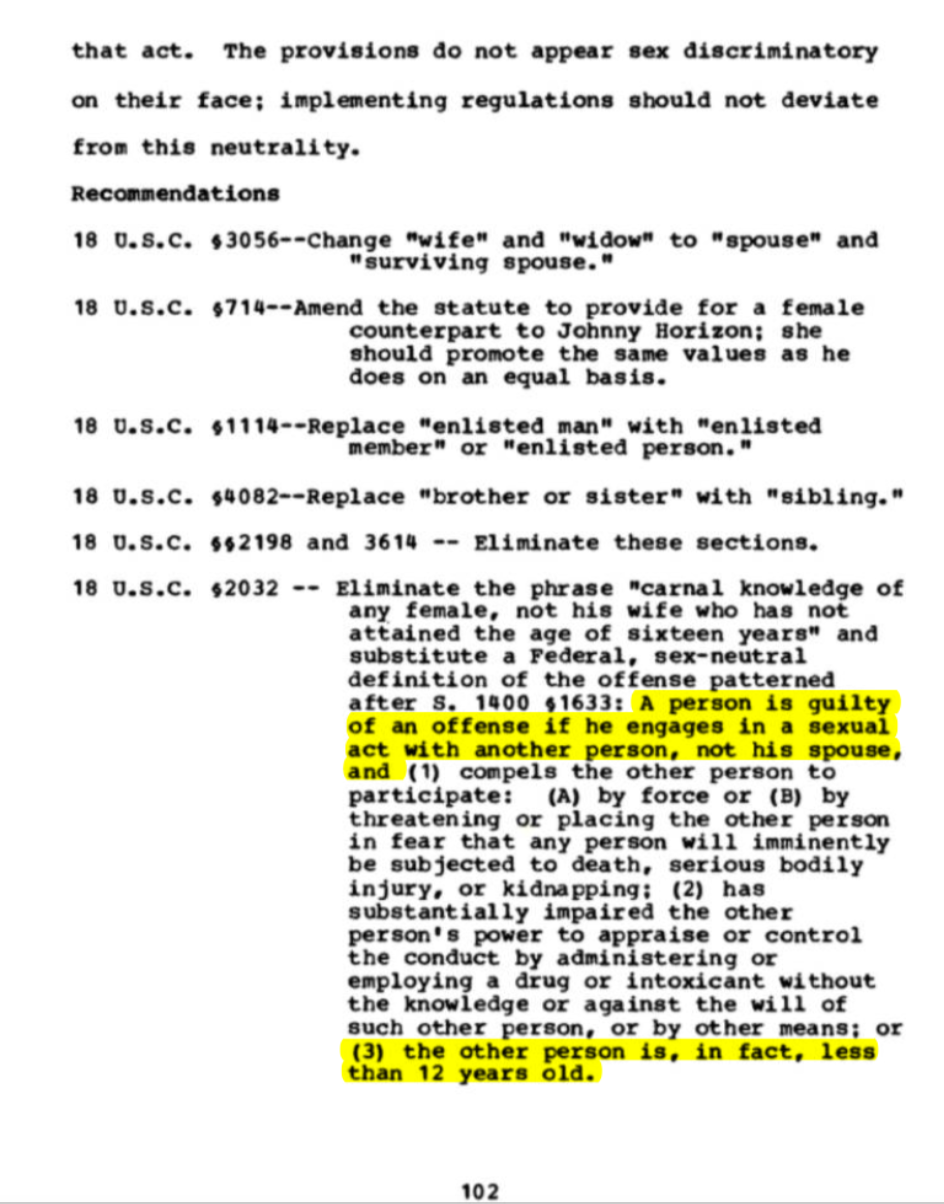 Looking at the bottom of the page, it is clear that the full quote is from a Senate measure introduced in 1973 (S. 1400) that never became law.

It was referenced to show how the language could be modified to avoid the assumption that the victim of a sexual assault will always be a woman. This passage of the report does not advocate lowering the age of sexual consent to 12.

Throughout her career, Ginsburg fought gender discrimination and advocated for equal rights to minorities. Her death stripped the Supreme Court, which was already tilted to the right, of one of its steadiest liberal votes.