Social media posts say that 5G technology creates coronavirus in human cells, but the false claim originated from a discredited paper later retracted by a scientific journal. The claims are not based on scientific evidence, experts say, and the paper was withdrawn after its publisher found "manipulation of the peer review" process.

"NIH Admits 5G Can Actually Create Coronavirus Within Human Cells," social media posts and blog articles say, based on a study first published on July 16, 2020 by scientific publisher Biolife. It was later added to the catalog of the National Library of Medicine's website, Pubmed.gov, part of the National Institutes of Health (NIH).

5G is the next generation of super-fast mobile network technology that will power self-driving cars, smart-home technology, streaming and other services. 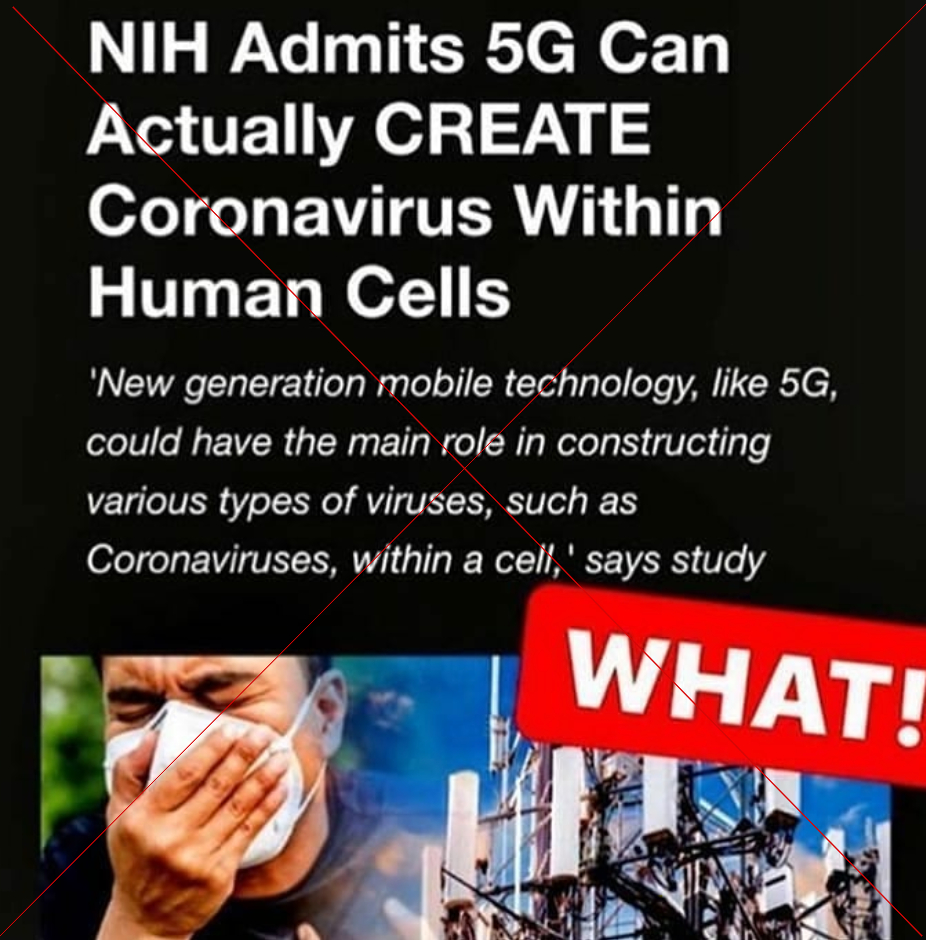 In some cases, like on this website and Infowars -- whose founder Alex Jones, a far-right conspiracy theorist, was banned from Facebook in 2019 and is known for calling the 9/11 attacks an inside job and describing the Sandy Hook school massacre as a hoax -- articles were later updated to claim that the study had been censored after it was withdrawn from both PubMed's and Biolife's websites. 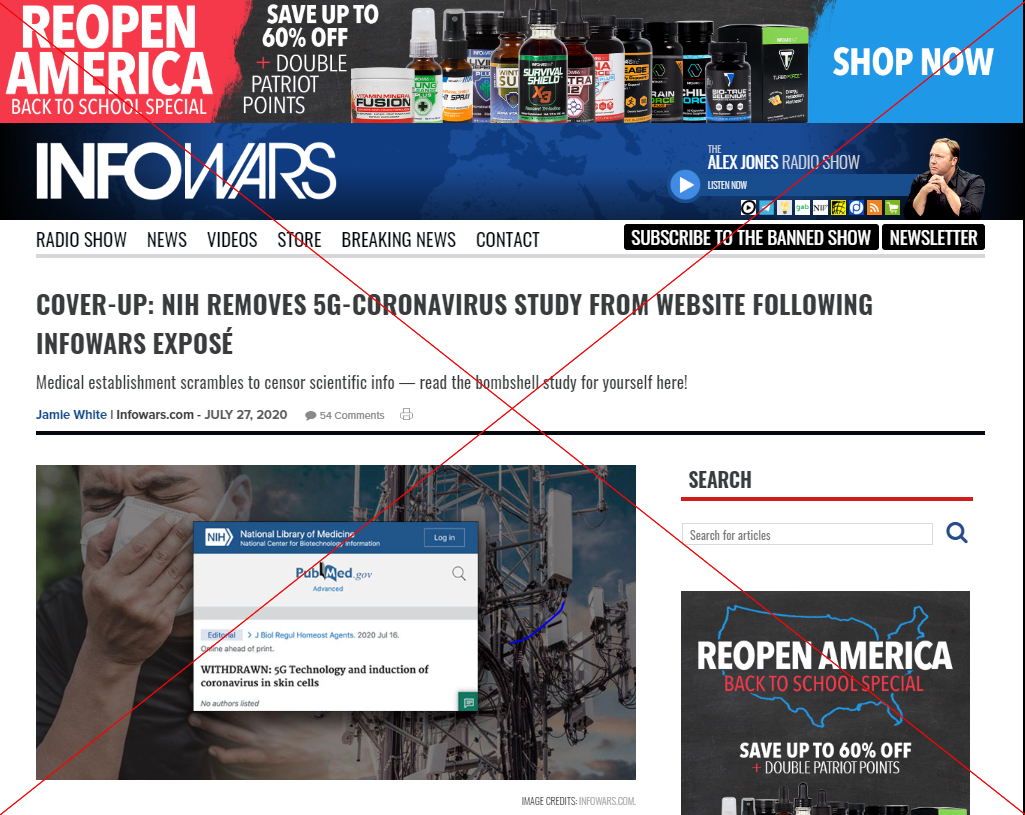 A screenshot of the Infowars blog post that shared the claim, taken on August 5, 2020

The study the posts are based on,"5G Technology and induction of coronavirus in skin cells," is labeled as "peer-reviewed" but is also marked as an "editorial" on the first page of the text.

AFP talked to scientists who agreed on the lack of evidence behind the claim and commented on the "predatory" nature of the journal that published the article, displaying obscure submission practices and a lack of transparency about what they pay for a publication.

The study claims that "5G millimeter waves could be absorbed by dermatological cells acting like antennas and play the main role in producing coronaviruses in biological cells."

"From a physics point of view, 5G does not make much of a difference in terms of the millimeter waves" than 4G, Mahadevappa Mahesh, professor of Radiology and Cardiology at the Johns Hopkins University School of Medicine and Chief Physicist for the Johns Hopkins Hospital in Baltimore, Maryland, told AFP by phone.

The World Health Organization (WHO) also says on its website that "viruses cannot travel on radio waves/mobile networks."

Mahesh added that the equations shown in the study did "not make any sense," an opinion also shared by Elisabeth Bik, a scientific consultant who specializes in researching scientific malpractice.

Bik wrote a full analysis of the now-retracted paper on her blog, Science Integrity Digest.

"I recognized some of the authors' names, and I already had a suspicion that it was going to be a sort of fantastic claim with no evidence at all behind it," she said. "If you make a very interesting hypothesis, like 'the earth is flat', you need to come up with proof, and they (the authors) didn't have that."

Their theory "is almost like saying that it (5G) generates new life (...) And why would it specifically form a coronavirus? They don't answer that," she added. The study also confuses the disease with the virus, throughout the study. "It's not technically correct to say it creates 'coronavirus,'" as this refers to the disease and not the virus "like with AIDS and HIV." A screenshot of the original abstract of the study taken on August 6, 2020

The validation process the study went through before being accepted by the Journal of Biological Regulators & Homeostatic Agents, described as a "peer-reviewed journal published every two months," remains unclear.

PubMed confirmed to AFP in a statement by email that the article was originally on their website because their citations come from MEDLINE -- a bibliographic database including "indexed journals, journals or manuscripts deposited in PubMed Central, and NCBI Bookshelf." The citations for articles from the Journal of Biological Regulators & Homeostatic Agents "are available through PubMed because the journal is currently indexed in MEDLINE."

Bik also reiterated that PubMed was not directly responsible for the content published by this particular journal. "But after that journal published this paper, they (PubMed) hopefully will realize that it's either a gullible journal or a journal that cannot be trusted anymore from this point on," Bik said. "They might want to reassess the inclusion of this particular journal in their index."

Instead of NIH "admitting" that "5G creates coronavirus in human cells," as the claims state, the content was automatically referenced on the site, and later withdrawn, after the publisher conducted an "investigation" which showed "substantial evidence of manipulation of the peer review."

Contacted by AFP, the editor-in-chief of Biolife, Pio Conti, refused to further elaborate on the paper's validation process and subsequent retraction.