A video has been viewed thousands of times in multiple posts on Facebook and Twitter alongside a claim that it shows Pakistani security forces apprehending three men after they escaped from a COVID-19 quarantine centre. The claim is misleading; the footage has circulated in reports about a joint training exercise by Pakistani security forces and police outside a COVID-19 quarantine facility.

The post's Urdu-language caption translates to English as: "Three patients ran away from quarantine in Chiniot. Then what happened is in front of you"

Chiniot is a city in Pakistan's Punjab province where the government set up quarantine facilities for COVID-19 patients at a university campus. 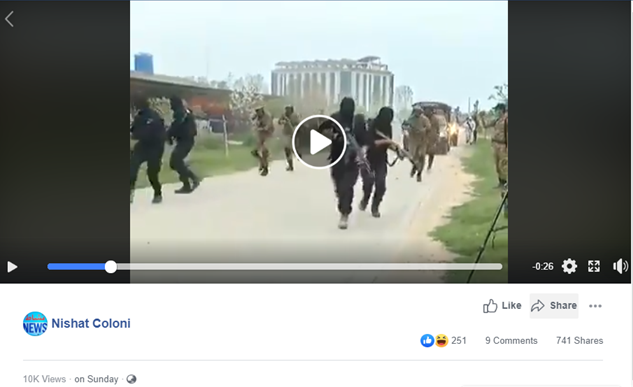 The same video was shared alongside a similar claim here, here and here on Facebook and here on Twitter.

ALSO READ: No, Canadian Army Is Not Deploying Tanks In Toronto Due To COVID-19

"This is a video of a mock exercise which was held on March 31, 2020 at the quarantine centre established at Fast University, Faisalabad Road," Mohsin Hasan, the sub-inspector of Chiniot Police told AFP by WhatsApp message.

Pakistani newspaper The Express Tribune published the video on its Facebook page here on April 11, 2020 in a post that described the footage as a "mock exercise".

"Police forces run a mock exercise at a university in Chiniot which is being turned into a quarantine centre. The mock exercise was conducted in case a patient quarantined in the centre tries to escape," the post's caption reads.

The Express Tribune stated on Facebook that "reports of many patients escaping from the centres have emerged" and that "the police force took it upon themselves to best prepare themselves if such a situation arises."

Below is a screenshot comparison of the video in the misleading Facebook post (L) and The Express Tribune video (R):