A Facebook post shared tens of thousands of times claims the United States Postal Service advises customers "never to send cash in the mail," and implies that voting by mail would also be unsafe. The claim about sending cash is partly false; a USPS spokesman said that the mailing of cash is not prohibited and can be insured, but using checks or money orders is safer because these methods are traceable. 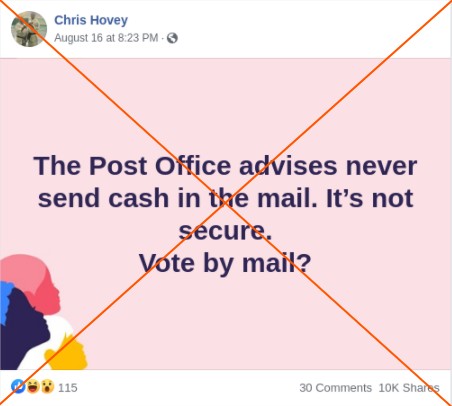 More examples of posts with the claim are available on Facebook here, here and here.

Also Read: Mail-in Voting In US Elections: How Secure Is It?

The post office scrutiny comes with millions of US voters expected to turn to mail-in ballots for the 2020 presidential election on November 3. It is a safer alternative to in-person voting for Americans fearful of the novel coronavirus, which has killed more than 173,000 people in the US, the highest toll of any country.

The president has also opposed efforts to give the cash-strapped agency more money as part of a new virus-related stimulus package, even as changes there have been blamed for causing delays in mail delivery.

David Partenheimer, a spokesman for USPS, told AFP by email: "Regarding sending cash in the mail, no, we do not prohibit it and continue to advise customers about the options they have."

He noted: "It is advisable to send money via a personal or certified check or money order, as these are traceable and a stop payment can be put on a check if it doesn't arrive at its destination."

Partenheimer also said that cash sent through the mail can be insured for up to $15, or up to $50,000 for Registered Mail.

Anyone sending significant amounts of cash should check with their local post office first, to make sure it is properly insured, and "verify that it is packaged securely enough to protect a high value item from being harmed during regular mail processing," he said.

AFP Fact Check has debunked other false claims related to the US Postal Service, including an image that appeared to show a postal union message against fascism.