Social media users claim a map showing a wave of wildfires in the US but none in neighboring countries proves climate change is not to blame, with some instead pointing to politically-motivated arson. This is false; fires have occurred in Canada and Mexico this year, and US law enforcement agencies say recent arson arrests are unrelated to political extremism.

"I guess the 'climate change fires' lack Canadian passports," wrote a Facebook user in a September 11, 2020 post. It features a map of North America showing wildfires in the US, yet none in Canada or Mexico.

Another user sharing the same map claimed: "ANTIFA DOES NOT OPERATE IN CANADA And that's why 'climate change fires' stop at the border," in reference to the uncoordinated political movement that opposes fascism online and in real life. 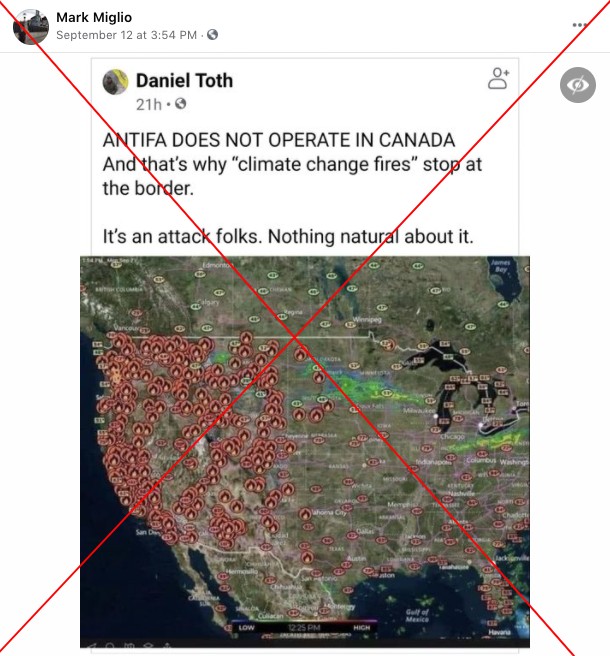 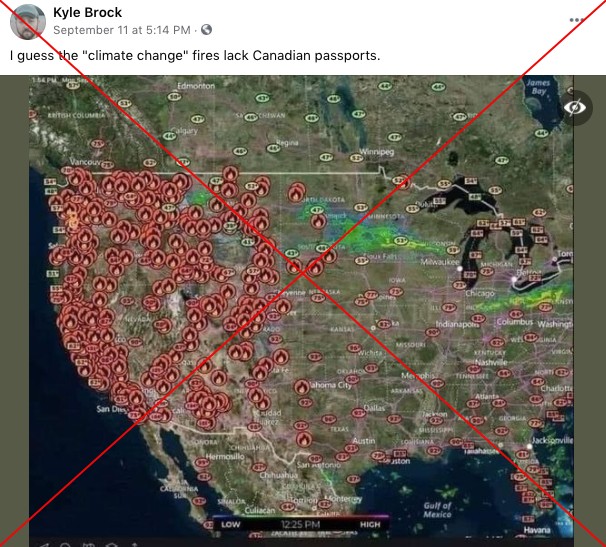 Antifa has come under increased scrutiny -- particularly from President Donald Trump -- during recent protests against police violence and racism across the US.

The unprecedented fire disaster has brought the issue of global warming to the forefront of the US presidential campaign, with Trump dismissing a climate change link to the fires.

Both the claim that fires stop at borders and the insinuation that they are the result of politically motivated criminal behavior are false.

Fires across the continent

It is unclear which specific map was used in the posts, but many databases offer US-only maps, such as the US interagency InciWeb.

A search in the Wildfire Dashboard for the western Canadian province of British Columbia, one of the country's most fire-prone regions, shows that 628 fires began during the 2020 season, starting on April 1. Twenty-three fires were still active as of September 17. This compares with 785 last year and 2,065 in 2018 over the April-September period. 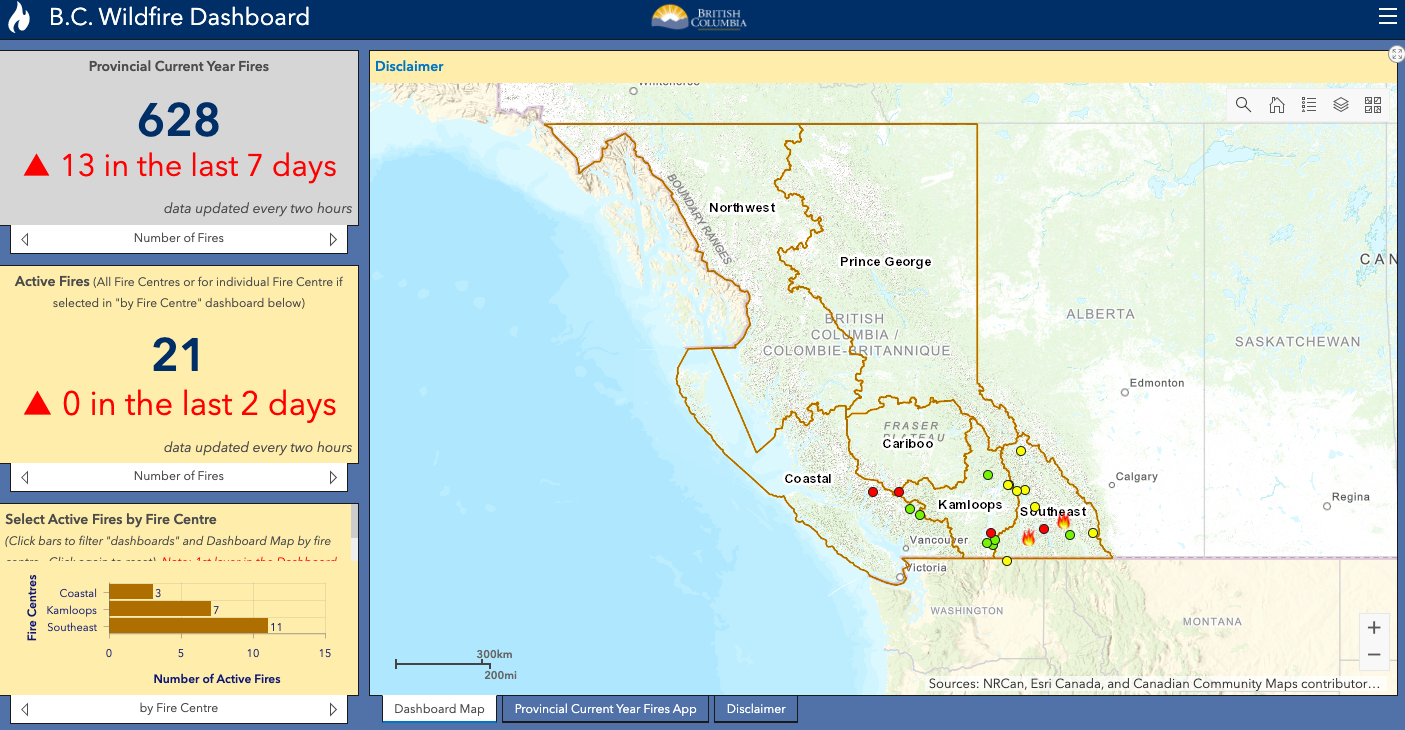 Screenshot of the BC Wildfire Dashboard taken on September 18, 2020

"BC's 2020 wildfire season has been comparatively quiet," Erika Berg, a spokeswoman for the BC Wildfire Service, told AFP by email.

"This is due in part to a slow start to the season, as our spring was rather wet and cool, which dampened fuels and lowered our wildfire risk substantially," Berg added.

In contrast with BC, the neighboring US state of Washington had an "unusually warm and dry" summer that led to "a steady trend upwards" in fires, Chris Loftis, director of communications for the Washington State Patrol, told AFP by email.

"This year, we are seeing increasing fire activity on the western and more populous side" of the state, he said.

Kaari Carpenter, spokeswoman for the US Forest Service (USFS), told AFP in an email that "None of the current US fires are burning across the US/Canadian border, but, as you know, wildfire knows no jurisdiction or border. It will burn wherever the fuel is available for it to burn."

In Mexico, where forest fire data is collected nationally and over different time periods, there were 5,579 fires between January 1 and September 10, 2020, according to the country's National Meteorological Service. The last available data show that five fires were active during the week of September 4-September 10, affecting Baja California and Quintana Roo, bordering Belize.

In the US, the National Interagency Fire Center counted 42,512 fires affecting nearly seven million acres between January 1 and September 17, 2020. This is below the 10-year average for this time period of 45,247 fires, but above the average of nearly six million affected acres.

According to the US National Park Service, nearly 85 percent of wildfires in the US are caused by humans, in cases such as unattended campfires, discarded cigarettes, or arson.

The American West is more prone to wildfires due to its distinct weather, according to Lynne Tolmachoff of the California Office of the State Fire Marshal.

"We have a Mediterranean-like climate, which is characterized by hot and dry summers and cool and wet winters. The lack of precipitation in the summer months, coupled with high temperatures and low humidity, dries out the fuels, or annual grasses and brush," she told AFP by email.

In California, 95 percent of fires are caused by human activity, but the Golden State experienced 14,000 lightings strikes in mid-August 2020, which "were the cause of most of the major fires we are still working to contain today," Tolmachoff said.

She added that "we do not have reason to believe that there is an unusual number of arson cases for any of the other fires."

In California's northern neighbor, "Reports that extremists are setting wildfires in Oregon are untrue," the FBI's Portland branch wrote on Twitter on September 11.

AFP Fact Check previously debunked claims that Antifa arsonists had been arrested in Oregon, where officers said calls about the false claims were hampering operations.

Reports that extremists are setting wildfires in Oregon are untrue. Help us stop the spread of misinformation by only sharing information from trusted, official sources. pic.twitter.com/ENc4c3kjep

In Washington, Loftis of the State Patrol said fire-related arrests this summer have shown "no evidence of coordinated activity."

Angie Lane, a spokeswoman for the Northwest Interagency Coordination Center, which includes Oregon and Washington, also said: "As far as the Antifa rumors, these rumors are untrue. We have no proof of that for fire cause."

Reputable scientists around the world are almost unanimous in their belief that the world is getting warmer because of human activity. This man-made climate change amplifies droughts, creating ideal conditions for wildfires to spread out of control.

Wildfires on the US West Coast have caused more than 40 deaths so far in 2020.

Claim :   Map of wildfires in the USA shared to show no fires in Canada and Mexico. The fires have been caused by politically-motivated arson.
Claimed By :  Facebook posts
Fact Check :  False
california wildfire US Wildfire Canada Wildfire Mexico Wildfire USA United States of America Climate Change Climate Change Denial Antifa Donald Trump
If you value our work, we have an ask: Our journalists work with TruthSeekers like you to publish fact-checks, explainers, ground reports and media literacy content. Much of this work involves using investigative methods and forensic tools. Our work is resource-intensive, and we rely on our readers to fund our work. Support us so we can continue our work of decluttering the information landscape. BECOME A MEMBER
📧 Subscribe to our newsletter here. 📣You can also follow us on Twitter, Facebook, Instagram, Youtube, Linkedin and Google News