Multiple Facebook and Instagram posts shared hundreds of times in October 2020 claim New Zealand Prime Minister Jacinda Ardern "bribed New Zealand mainstream media with NZ$125 million" taken from the country's taxpayers in order to win re-election. The claim, however, omits important context; the government introduced funding of NZ$50 million (US$33.23 million) to help struggling media organisations stay afloat during the Covid-19 pandemic; as of October 29, 2020, the second NZ$75 million (US$49.83 million) tranche has not passed through the cabinet.

The claim was published here on the "New Zealand Heritage Union" Facebook page on October 18, 2020. 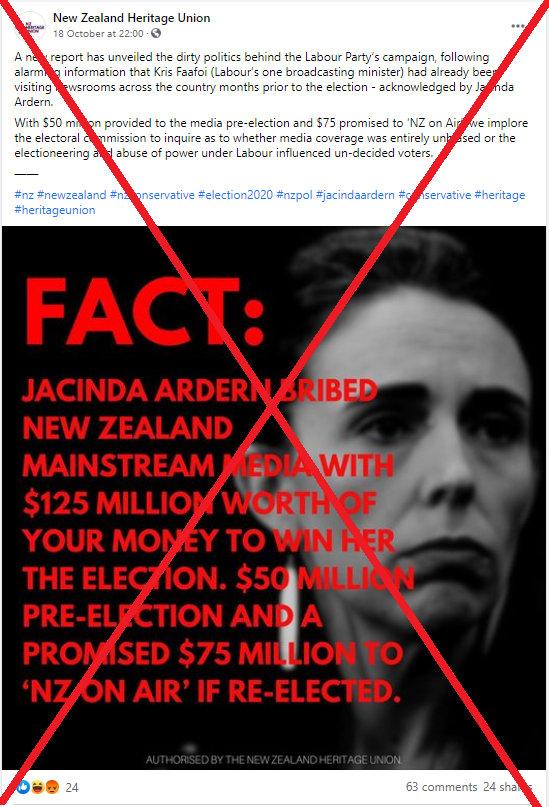 The post features an image of Jacinda Ardern, with text overlay that reads: "FACT": "JACINDA ARDERN BRIBED NEW ZEALAND MAINSTREAM MEDIA WITH $125 MILLION WORTH OF YOUR MONEY TO WIN HER THE ELECTION. $50 MILLION PRE-ELECTION AND A PROMISED $75 MILLION TO 'NZ ON AIR' IF RE-ELECTED."

The post's caption states: "A new report has unveiled the dirty politics behind the Labour Party's campaign, following alarming information that Kris Faafoi (Labour's one broadcasting minister) had already been visiting newsrooms across the country months prior to the election - acknowledged by Jacinda Ardern.

"With $50 million provided to the media pre-election and $75 promised to 'NZ on Air', we implore the electoral commission to inquire as to whether media coverage was entirely unbiased or the electioneering and abuse of power under Labour influenced un-decided voters."

Text on the bottom of the image reads: "AUTHORISED BY THE NEW ZEALAND HERITAGE UNION".

The image has also been shared hundreds of times alongside a similar claim on Facebook here and on Instagram here.

The claim, however, is being shared in a misleading context.

By April 2020, the New Zealand media industry was struggling due to the ongoing Covid-19 pandemic. NZME, owner of the NZ Herald and Newstalk ZB, cut 15% of their workforce and Bauer media closed operations in the country, after being forced to halt their printing operations due to Covid-19 restrictions.

"I'm fearful that if the financial standing of the owners of Mediaworks and Stuff decline sufficiently they may be minded to follow Bauer and close operations, we must ensure that doesn't happen," - Academic and former editor of the NZ Herald, Gavin Ellis.

On April 15 academic and former editor of the New Zealand Herald, Gavin Ellis, told the New Zealand Epidemic Response Committee that advertising revenues were in "freefall" and estimated media organisations lost between 50 and 75 percent of their ad revenue since the beginning of the pandemic.

"I'm fearful that if the financial standing of the owners of Mediaworks and Stuff decline sufficiently they may be minded to follow Bauer and close operations, we must ensure that doesn't happen," he told the committee.

On April 23, 2020, the New Zealand Minister for Broadcasting, Communications and Digital Media Kris Faafoi announced a NZ$50 million support package aimed at helping the media industry "get through the COVID-19 pandemic".

"Full details of the package are:

"$11.1 million for specific targeted assistance to companies as and when needed.

"Commitment to build on the Local Democracy Reporting pilot as part of longer term support."

The aid for media organisations came a month after the New Zealand Government announced an over $NZ12 billion support package for other industries, businesses and individuals also financially affected by Covid-19.

A spokesperson for Minister Faafoi told AFP in an October 23 email a proposed second NZ$75 million (US$49.83 million) tranche of funding still requires "Cabinet approval, with detail on what would be funded and how still to be decided".

According to this TVNZ report, Minister Faafoi reportedly told representatives from the main news media union, E tū, that Labour would commit NZ$75 million to the initiative in three annual blocks of NZ$25 million (US$16.6 million).

NZ On Air, the agency responsible for allocating government funding for eligible screen productions, music, community radio stations and news journalism, would be in charge of administering the funding, according to the TVNZ report.

New Zealand Labour included the initiative in their election manifesto, describing it as a commitment to "multi-year contestable funding through NZ On Air to fund public interest journalism," but didn't provide any other details for the funding.

"To put the funding in perspective: One retail group (The Warehouse) on its own received NZ$67.8 million in wage subsidies during the lockdown," Dr Ellis added.

The TVNZ report also states Minister Faafoi "had visited many newsrooms across the country, and that there was an appetite for financial support to happen as soon as possible, in order to avoid more job losses". This line was emphasised by the New Zealand Heritage Union, who described it as "alarming information" and implored the New Zealand Electoral Commission to investigate.

"Our role does not include regulating the content of campaign advertising, broadcasts or media activity," - New Zealand Electoral Commission Spokesperson

A spokesperson for Minister Faafoi said in an October 23 email "the Minister would have meant that in the broad sense of his interactions with media representatives... such as Sinead Boucher, from stuff.co.nz; Michael Boggs, from NZME; TVNZ, RNZ and Mediaworks representatives; etc".

A compilation of meetings between Minister Faafoi and TVNZ, NZME, Mediaworks, RNZ featured in his diaries. Taken October 23, 2020.

A spokesperson for the New Zealand Electoral Commission told AFP it had no plans to investigate the allegations of bribery made by the New Zealand Heritage Union. "Our role does not include regulating the content of campaign advertising, broadcasts or media activity," the spokesperson said in an October 23 email.