An image has been shared repeatedly in multiple posts on social media and on online forums which claim it could show US President Donald Trump receiving hospital treatment after he tested positive for the novel coronavirus in October 2020. The claim is false; the image has been doctored from a stock photo which has circulated online since at least April 2020, more than four months before Trump announced he had contracted Covid-19. 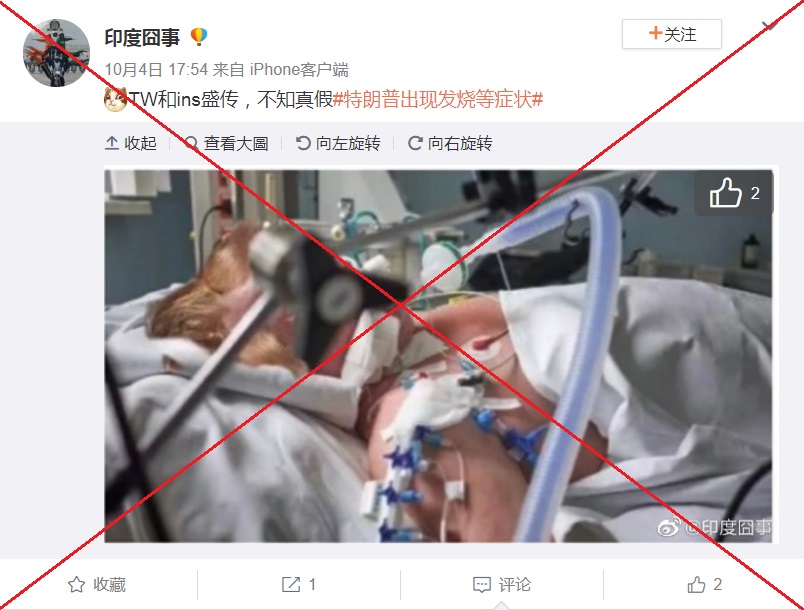 Screenshot taken on October 9, 2020, of the misleading Weibo post

It purports to show a man with blonde hair receiving hospital treatment.

The post's simplified Chinese-language caption translates to English as: "Widely shared in Taiwan and on Instagram, not sure if it's true or not #TrumpDevelopedSymptomsSuchAsFever#".

On October 2, 2020, Trump announced on Twitter he and First Lady Melania Trump had tested positive for Covid-19, as AFP reported here.

The same image was also included in online forum posts here, here and here alongside a similar claim.

The claim is misleading; the image has been doctored.

A reverse image search on Google found this image credited to Kiryl Lis on Adobe Stock.

Below is a screenshot comparison of the doctored image (L) and the Adobe Stock picture credited to Kiryl Lis (R):

The Adobe Stock picture has been doctored to include blonde hair in the misleading posts. The original image shows a person with grey hair.

Both articles were published several months before Trump revealed he had tested positive for Covid-19.

Claim :   Image shows US President Donald Trump receiving hospital treatment after he tested positive for COVID-19.
Claimed By :  Online forums
Fact Check :  False
Donald Trump COVID-19 COVID-19 Outbreak COVID-19 Pandemic Coronavirus Coronavirus Pandemic Coronavirus Outbreak COVID-19 Vaccine COVID-19 Cure Coronavirus Cure Coronavirus Vaccine US Elections 2020
If you value our work, we have an ask: Our journalists work with TruthSeekers like you to publish fact-checks, explainers, ground reports and media literacy content. Much of this work involves using investigative methods and forensic tools. Our work is resource-intensive, and we rely on our readers to fund our work. Support us so we can continue our work of decluttering the information landscape. BECOME A MEMBER
📧 Subscribe to our newsletter here. 📣You can also follow us on Twitter, Facebook, Instagram, Youtube, Linkedin and Google News